The PEN Ten with Yuri Herrera 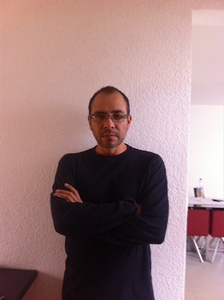 The PEN Ten is PEN America’s weekly interview series. This week, we speak to Yuri Herrera. Born in Actopan, México, Herrera has written three novels: Trabajos del reino, Señales que precederán al fin del mundo, and La transmigración de los cuerpos, all of which have been translated into several languages; the latter two were published in English by And Other Stories. He is currently an assistant professor at Tulane University in New Orleans.

Herrera will be participating in the events Mexico’s Latin American Leadership on April 27, Literary Quest: Westbeth Edition on April 28, La Frontera: A Literary Salon on April 30, and Mexican Landscapes on May 1 at the PEN World Voices Festival.

I started writing as a kid, and as soon as I got started, I felt like I wanted to keep telling stories. But I didn’t call myself a writer then. I still feel strange giving myself the title. Maybe the moment when my identity and my desire for writing came together was in secondary school. Boys were sent to a class of technical drawing, and girls to a typing class. I am truly incapable of drawing a straight line, and the teachers discovered this on the first day of class, so I was sent to the typing class instead and, there, surrounded by girls and typewriters, my hormonal learning and my typing learning happened at the same time.

Joaquim Maria Machado de Assis, a nineteenth-century Brazilian writer who wrote with a sense of humor and technical prowess rarely seen since then. He was the kind of writer that didn’t care about what was in fashion or how many books he would sell. In the long run, his writing outlived all those that vilified him.

Hard-boiled novels—especially those by Dashiell Hammet, Raymond Chandler, Walter Mosley, and Chester Himes, because of their brutally honest gaze at a brutal reality; Mexican poetry from the 1930s and ’40s—the group better known as Los Contemporáneos, that had among its members José Gorostiza and Xavier Villaurrutia, who I think explored the possibilities of the Spanish language with a depth and precision only comparable to that of the writers of the Golden Age; medieval literature, because those writers were unashamedly making up the whole world, particularly writers like John Mandeville, retelling voyages through worlds barely known to the people from his surroundings.

I used to write love letters as a teenager; now it feels unthinkable. I will do it again.

In journalism, exclusively regarding the private life of others, when such private information has no public relevance. One should expect journalists to exercise some empathy when deciding how to talk about or show the suffering of others. In art, only the information that the artist deems necessary to hide in order to better say a wider truth.

The writer’s responsibility cannot be dictated by any party, politician, sponsor, or cleric. If it is possible to talk about the responsibility of the writer, it is to be discontent with the present state of language, since language continues to evolve with society. It is both an ethical and an aesthetic responsibility, in the sense that new ways of saying are standing for new ways of doing.

To offer alternatives of meaning, to challenge the homogeneity of perspectives of a world constructed by the powerful. Fiction writing doesn’t have the immediate, measurable impact of, say, journalistic writing, but it does have an influence in the public sphere—a slower, subtler influence, but important nevertheless. The writer pushes a rephrasing of our common nightmares and their possible solutions.

Waiting for the Barbarians, by J.M. Coetzee. Among other things, this book shows not only the consequences of decisions made from the highness of power on the bodies of real people, but also the fragility of those who think of themselves as perennially powerful.

Observation is something everybody does as a matter of curiosity. Surveillance implies the exercise of power over someone else, the downgrading of an individual from being a person with agency to being a simple object to be manipulated.

Looking forward to speaking about China and Hollywood on tomorrow's panel. Thanks to @usc_uschina and @PENamerica for hosting!

NEW: PEN America joins @pen_belarus, @pen_int, and over 20 other PEN Centers in signing an open letter expressing deep concern over the systematic violations of free expression rights & human rights in the run-up to the Belarus elections. https://bit.ly/2Pm06Cc