The PEN Ten with Troy Wiggins 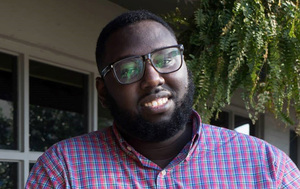 I took my first fiction workshop class my sophomore year of college. While in the class, I was surrounded by “real” writers—upperclassmen who were making beelines for MFA programs, residencies, and the like. The “real” writers in this workshop were of a type: young, white, and with a smug confidence in their ability and their right to belong in that space. There was one instance where the professor canceled the class in remembrance of Hunter S. Thompson, and I remember a white classmate looking over to me, one of only two black people in the class, and asking me if I even knew who Hunter S. Thompson was. We, the black students of the class—in my institution’s undergraduate writing program in general—faced near-constant attacks on our work, our subject matter, our language use, our very right to exist in the program.

It was in that hostile space that my work began to intersect with my sense of identity, and I developed the idea that my writing should serve some greater purpose than just existing as a manifestation of my creativity. I needed to speak to the ongoing hostility that I faced as a black man, both in the classroom and in the world.

Everything that Walter Mosley has ever written.

My current obsession is folk magic, specifically the traditions of conjure and rootwork that my unknown ancestors practiced. It’s blowing my mind to discover how much everyday magic my mother, wife, aunts, and cousins still unknowingly practice. I have an aunt with a restless spirit who makes bottle trees wherever she goes. My grandmother kept a herb garden up until the day she died, and she frequently provided healing teas and protection to women who found themselves in relationships with abusive men. That everyday magic is a legacy left to me, and I’m just now starting to unravel it.

That, and board games/role playing games. My current favorite board game is Splendor. It’s simple to set up, easy to learn, and difficult to master.

Definitely writing about my own death. We all have a preoccupation with mortality because time is such a limited currency for us. Alongside that, I have to reckon with the reality that as a Black American, my life can be taken from me at any time. The interplay of those two things has made me think very deeply about how I could die, and I’ve put those things down on the page a few times. Sometimes I have a character die in my place, but the instances of my death in my work that are closest to me remain private.

Censorship is never acceptable, but the ideas and voices of those with the power of systems and forces on their side can have a disparate impact on the lives of the marginalized and oppressed. In these cases, we can’t silence the powerful since they control all the means of communication. But we can speak out against them, and match their voices with our own, and hold these systems and people accountable. That’s not censorship, but resistance—though, as we see now, people in power tend to view resistance as oppression and censorship. Still, this kind of pushback against dominant voices is acceptable to me.

The responsibilities of any writer are to tell the story that they need to tell, to tell the truth in everything that they write, and to survive while working. It’s important for writers to realize that it might take them what seems like a long time to create truthful work, but that our work is better for having taken the time and energy to get it right. We also have to advocate for ourselves and our survival. Writing is a noble art, but it’s work as well. We deserve to get paid for that work so that we can survive and continue creating.

Collectively, writers are beholden to the same truth-telling that I mentioned above. We are supposed to challenge readers to examine themselves and the world around them and reckon with conventional notions of reality, power, and existence. Writers, be they writers of essays or of postcolonial science fiction, are charged to introduce readers to new ideas, new ways of seeing, and challenge the ways they think about themselves, justice, home, and about humanity. In this, I think that the public intellectual has not fallen out of fashion—they’ve evolved. Historians and sociologists are writing fiction, essays, and memoirs that build vital and human connections with readers. Talented writers are introducing readers to new political and social ideas that force them to truly consider the complexity of the world in which they live.

I have never been arrested, but I have been detained on several occasions.

I grew up in a relatively industrial part of my city, where there were many factories and plants dedicated to producing paper, construction materials, and performing repairs on heavy machinery. As is normal when industry and poor black neighborhoods intersect, thefts were frequent occurrences. Because I lived close to these industrial sites and hung out with several other young black men, I had many interactions with law enforcement officials who suspected me or my friends of theft.

I’ve also been approached and cornered by police while leaving school, while standing at a bus stop, while walking down public streets, while entering a library, while on dates, and while leaving my third shift job in college. For someone like me, who grew up black and poor in the urban American south, the police were a constant presence, a reminder of the State’s power over us and our bodies. With the help of people in my community, I successfully avoided having to ever truly interact with the prison industrial complex. But so many in my community—brothers, aunts, cousins, sisters—did, and are still caught up. It’s important for us to remember and honor the stories of these people.

Definitely Václav Havel’s The Power of the Powerless, which is not a book but part of a collection of essays. The essay itself has been pretty widely translated and is readily available. Havel uses very plain speak and recognizable anecdotes to communicate to oppressors the inevitability of revolt as a result of their totalitarian actions. He also speaks to the oppressed, laying bare the reality (and banality) of state oppression and reinforcing the idea that oppressed people are responsible for shaking off the lie of the State’s ultimate power and organizing resistance against that power.

Admittedly, the historical and political context for this essay is very different than our current American political reality. But given the general sense of despondency I’ve seen among people, The Power of the Powerless might help to galvanize folks who are feeling lost after our recent presidential election.

The difference between these two concepts and actions relies on power and intent. Both observation and surveillance are covert ways of gathering information. However, observation crosses the line into surveillance when the information gathered will be used to disenfranchise, disempower, or brutalize the parties being watched. Especially if the watcher uses the very idea of their observation as a tool in said disenfranchisement. For example, the older people in my neighborhood would sit on their porches and take account of the goings on in the neighborhood—comings and goings, favorable or unfavorable developments, and intelligence trading in the form of gossip. However, when the police would creep through in their cruisers, everyone would freeze. We all knew that law enforcement kept watch on residents in our neighborhood, and not for reasons involving service and/or protection. Instead, their aim was to remind us of their presence in the event that we were to step out of line in any way.

Troy L. Wiggins is a writer and editor from Memphis, Tennessee. His short fiction has appeared or is forthcoming in Griots: Sisters of the Spear, Long Hidden: Speculative Fiction From the Margins of History, Expanded Horizons, Fireside Magazine and Memphis Noir. Troy lives in Memphis with his wife and their two dogs.