The PEN Ten with Trish Salah 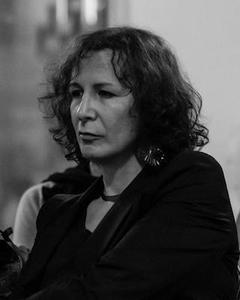 The PEN Ten is PEN America’s weekly interview series. This week, guest editor Randa Jarrar speaks to Trish Salah. Born in Halifax, Salah is the author of the Lambda Award-winning Wanting in Arabic, and of Lyric Sexology, Vol 1, and is co-editor of a special issue of TSQ: Transgender Studies Quarterly, on Transgender Cultural Production. She recently organized the Writing Trans Genres and Decolonizing and Decriminalizing Trans Genres conferences at the University of Winnipeg. Currently, Salah is assistant professor of Gender Studies at Queen’s University in Kingston, Ontario.

I wrote fiction and poetry as a teen, recounted fantasy stories as a child to any family member who would listen. I began to have a writing practice at Concordia, in Montreal, where I studied creative writing. I think it was beginning to have a writing community outside of, if initially based in, the university workshop, and submitting work to little magazines, that let me know I would be a writer.

Becoming; the way words affect, or what they feel like; doubleness; desire’s flip into its opposite(s); the violence that makes and evacuates home, homeland, histories; the occult; love, losing it; influencing machines; telepathy, memory; the difference between identification and identity. Lebanon, Palestine. But also, right now and for a long while now, I’ve been thinking an awful lot about trans literatures and cultures, criminalization, colonization…

Daring is a funny word. A lot of the writing in my second book, Lyric Sexology, is concerned with working on or through phobic, toxic, affectively painful figures and tropes that have contoured transsexual and transgender visibility or intelligibility, for want of better phrasing. There is a sense of exposure, and it is painful trying to write something that dwells within transphobia, or racism, or misogyny, or homophobia, or cisnormativity, and that tries to work it through or break it down. So that writing is difficult in a particular way. Difficult to know, too, whether the exercise is unsettling or consolidating what I hope it is working on.

Censorship is inevitable, part of psychic life and engaging with other people. The censorship of political speech is deplorable and to be resisted, but also is often not recognized as such. One form it commonly takes is speaking on behalf of others that one claims cannot speak for themselves. Edward Said, Gayatri Spivak, and Viviane Namaste have all made good critical hay of Marx’s “They cannot represent themselves; they must be represented.” This power game is in play when feminists of a certain stripe refuse to countenance the speech and analysis offered by sex workers, preferring to represent them as traumatized and necessarily silent victims of trafficking, abuse, and pimping. Cherry-picking representative speakers from marginalized or oppressed communities who espouse moderate, convenient, or non-controversial positions, or refusing to recognize elected (Palestinian) governments or social movements “we” don’t like, are liberal ways in which the conditions of what is politically sayable are bent to power.

What is hard, yet pressing to say or think? How to give language to that, to try to have some fidelity to that? What are the conditions of possibility for saying or thinking, and how best to interrogate what makes some things sayable, thinkable, easy even, while making other kinds of languaging a liability at best, an impossibility at worst? I think if writers have responsibilities, they are entangled in these kinds of questions, but also in wrestling with them in ways that are attentive to the effects of their speech, which is also to say, of their writing.

I think we are at odds, because we are politically, discursively, and existentially situated differently. I think the function of the public intellectual persists, but that publics are heterogeneities, and what passes for public is often what is dominant. As soon as I say gender, or women, fewer people are reading. If I say whiteness or white supremacy, fewer people are reading. Masculinism, ableism, racism, and cissexism remain the presumed grounds of public speech. As writers, we can address this, but the structuring logics of capital, misogyny, and colonialism make it genuinely difficult to write—and perhaps more importantly, to read—in ways that are not weakly reformist or given over to dream stuff.

Detained a couple of times, but not arrested.

I assume most government leaders have access to Amazon, so… I wonder if President Obama has read Mohamedou Ould Slahi’s Guantánamo Diary? Yann Martel mailed former Canadian Prime Minister Stephen Harper a book every two weeks for four years, but I don’t know that the letters ever arrived at their destination. Why waste the writing of Mahmoud Darwish on Benjamin Netanyahu? He’s read it and he doesn’t care. I think the more compelling question is what book will challenge a people’s belief in the legitimacy or justice of prisons, or of occupation, as such.

Surveillance implies observation on the side of the apparatus of power. If you are a person without papers, visibly racialized, poor or native, a sex worker, trans, then the line between observation and surveillance moves as you leave your room, apartment, shelter, or community; surveillance inheres in the observation of those who don’t need to notice themselves surveilling you. I like Steve Mann’s notion of sousveillance or “undersight,” and especially Simone Browne’s theorizing of dark sousveillance or resistant forms of observation from below that contest surveillance’s itinerary as a technology of anti-Black domination and systemic violence/knowledge.