The PEN Ten with Sonia Guiñansaca 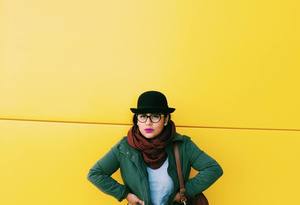 Migrant justice has become a key battleground for issues of race, labor, and state power. One writer I’ve learned a lot from is the activist Sonia Guiñansaca. Born in Ecuador, arriving in the US at age five, Sonia has been a leader in the movement fighting for the rights of undocumented migrants. She participated in the second recorded civil disobedience action committed by undocumented youth, as well as one of the many highly-publicized hunger strikes for the Dream Act. We work together at CultureStrike, for which she helped build the first UndocuWriters retreat; she’s also been editing one of the first anthologies for undocumented writers. You can learn more about her thrilling, vital work at her website. Sonia’s also been curating the Asian American Writers’ Workshop’s open mic, in which we’re trying to create a safe space for QTPOC emerging writers. The next one is Saturday, September 5, 2015 at 3:00pm.

When did being a writer begin to inform your sense of identity?
I was taught that writers are not migrant, that writers do not look like me, that they do not write stories and poems that reflect my life. From public school reading lists to bookstores to online literary spaces, growing up, my tiny self was only exposed to white American writers. It was not until I was in high school that my social studies teacher Mr. Murphy gave me Piri Thomas’s Down These Mean Streets and my English teacher Ms. Greene made us read Beloved by Toni Morrison, and I was able to pause and get a glimpse of the possibility of being a writer. Discovering writers of color made it real! And so I began to write poetry; when everything around me seemed so unsure because of my immigration status, at least my poetry held my world together. Writing was a way of documenting my undocumented life. In my twenties I began to claim a writer’s identity and introduce myself as an artist and poet as a political statement.

I’ve had to be intentional, audacious, and daring to identify as a writer. Claiming a writer’s identity is so bold. It’s a big statement: “I can create, I can imagine, I have something to say,” and that is a radical thing to state, especially as a migrant Ecuadorian queer femme. When most of the white literary world and white supremacists are telling you, a writer of color, that there is no space for you or that your writing is not enough or that it doesn’t meet a certain criteria, that’s exactly when I rise and say: “Fuck you, I am a writer, watch me create and imagine.”

Whose work would you like to steal without attribution or consequences?
Toni Morrison’s and Arundhati Roy’s. They are creative geniuses.

Where is your favorite place to write?
Like a true New Yorker, my favorite places to write are trains and buses. They did not start off as my favorite places to write, rather they were what I had and could afford. Working full-time, handling family responsibilities, and doing community organizing left me with little time to write. A full household also leaves you with no writing space. Thus, I began to use my commuting time on trains and buses as my writing time. I was already spending an hour to two hours on the 1 train or M5 bus, and thus over the years they have become home for my poetry. Trains are perfect locations for inspiration. The moment when the train cars go above ground, and sun rays pierce through the windows—that is when I get the biggest creative rush.

Have you ever been arrested? Care to discuss?
The first time was in July 2010 as part of the second ever recorded act of civil disobedience by undocumented young people. To put pressure on congress, 21 of us undocumented organizers from across the country took over the Senate building in Washington, D.C. and demanded the passage of the Dream Act. Two years later I was arrested trying to infiltrate an Alabama detention center as part of the first wave of attempts to organize undocumented detainees and bring to light the inhumane conditions they were living in, their lack of medical treatment, abuse many women were facing, and helping them with legal counsel for their deportation cases.

Obsessions are influences—what are yours?
I obsess over migrant artists like Rihanna and Nicki Minaj. I love their music, style, and how unapologetic they are when calling out whiteness and misogyny. I can’t get enough of poet Warsan Shire and her tumblr. I obsess over visual artists, religiously following the work of Wangechi Mutu, Basquiat, and Amaryllis DeJesus Moleski. I also can’t get enough of instagram curvy fashion bloggers like @OshaWaiters, @TheCurvyNista, and @NadiaAboulhosn. I am a complex, complicated, brilliant, stylish, and creative person, so all these artists fuel my inspiration and spirit.

Sometimes, most times, the expectation of undocumented migrants is to only talk about policy and how we can contribute to this country. This expectation dehumanizes us; it doesn’t allow room for us to show up as whole people. Till this day, every time I perform that poem in migrant movement spaces, people get so uncomfortable, especially cis-straight men. The poem also disrupts the gaze of my sexuality in relation to men. However, my sexual needs are my priority and they belong to me. And yes, my mom has heard the poem.

What is the responsibility of the writer? While the notion of the public intellectual has fallen out of fashion, do you believe writers have a collective purpose?
The responsibility of the writer is to document current times and imagine possibilities. We hold space for people in our pages, and at least for me, I am able to jot down in poetry things that are happening in my community that are under-looked by the mainstream. As a queer femme migrant woman of color my writing is a space where I can transcribe and record resistance. Erasure happens when it comes to the history/lives/contribution/resistance/survival of people of color in America, and so with my pen I make sure that they exist and are remembered in my stanzas, in between the lines, and on every space of my paper. Writers of color deserve to take up space and record our lives and record our communities because no one else will. For writers of color, it is our responsibility to also offer possibilities and give our communities spaces of imagination. Our responsibilities as writers are to write, document, hold the ache, spark the healing. When people question our writing, we need to remember that our writing is enough and that it is a huge contribution to social justice and to the world.

My responsibility as a writer is to the young girl of color who is right now looking for herself in poetry and hoping that it does not take her years into high school to find a writer of color that speaks to her experience. My poetry writes us into existence. Our collective purpose is to humanize our marginalized communities, to disrupt the gaze, and to tell our own stories.

What book would you send to the leader of a government that imprisons writers?
I wouldn’t spend my time and resources sending any government a book. I would rather send many books to those imprisoned and in detention centers. I would send them books by NoViolet Bulawayo, Junot Diaz, Toni Morrison, Assata Shakur, Aracelis Girmay, Mumia Abu Jamal, Audre Lorde, Janet Mock, Piri Thomas, Teju Cole, and many coloring books.

Where is the line between observation and surveillance?
It depends on who is doing the observation.

Ken Chen is the executive director of the Asian American Writers’ Workshop, and a founder of Arts & Letters Daily. The 2009 recipient of the Yale Series of Younger Poets Award for his debut poetry collection Juvenilia, he is also a recipient of fellowships from the National Endowment for the Arts, New York Foundation for the Arts, and the Bread Loaf Writers conference. A graduate of Yale Law School, Ken successfully represented the asylum claim of a Guinean teenager who had been detained by the Department of Homeland Security. For the PEN Ten, Ken will be interviewing the poets and novelists of the Asian-American counterculture.

Today is the Day of Solidarity with Belarus Political Prisoners, as announced by @Tsihanouskaya. PEN America condemns the unjust imprisonment of Belarusians and stands by all those courageously speaking out against the Lukashenka regime #StandWithBelarus #ЖывеБеларус