The PEN Ten with Saul Williams 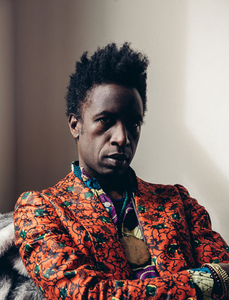 The PEN Ten is PEN America’s weekly interview series. This week, we speak with poet and performer Saul Williams, who has been called “hip-hop’s poet laureate.” Williams is the author of four books of poetry, has recorded five albums, and has been a major influence on modern poetry since the release of his film Slam, which won the Grand Jury Prize for Drama at Sundance in 1998. US (a.), his new collection of poems that considers race, class, gender, and what it means to be American, is now out from MTV Books.

When did being a writer begin to inform your sense of identity?
I began to think of myself as a poet slightly after I began being called one. I made the decision to recite passages from my journal at open mics in the mid-’90s after being invited to a reading where many poets read and I realized that my journal entries had something in common with the poets onstage. Up until this point I had identified as an actor and was indeed in graduate school for acting when I began writing seriously. I found the discipline for writing fit quite simply in my schedule and in fact was encouraged by the teachers who thought we should be documenting our journey.

So I began by carrying a pocket-sized notebook and capturing every rapturous idea regardless of the moment. I wrote in nightclubs, on the dance floor, on the subway, in cafes, upon waking, and often before going to sleep. I began to read back what I wrote, edit and shape ideas into stanzas, passages, sonnets, lists. I began returning to ideas to expand them, see them through. And all of this was balanced with long hours spent reading, picking books by authors I’d heard referenced but had never taken the time to read. I encountered influences, taste makers… I began to appreciate the construction of a sentence. All simultaneously. But still after about a year of open mics, countless readings, and a few filled journals, when the occasional person, perhaps because of how I was writing or observing the space around me would ask, “Are you a poet?” I would respond with a slightly corrective, “I write poetry,” thinking it less pretentious to identify as one who writes poetry rather than as a poet.

Whose work would you like to steal without attribution or consequences?
Today I would steal the work of Paul B. Preciado, not because I would want to pass his work off as my own, but because I admire how that mind works. I want to steal the workings of his brain. There was a time when I would have stolen the work of Ben Okri, or the seeming quiet of his workspace. I think I’d be more content stealing the experiences of Allen Ginsberg than the writing itself. But I could surely use Baraka’s wit. I’m not sure I would steal from the Sufi poet Hafiz as it would take away from the pleasure of reading him. I might get the most bang for my buck if I stole from Pessoa. Hmm… Now I’m thinking Octavia Butler, but haven’t men taken enough credit from women? Fine. Borges.

When, if ever, is censorship acceptable?
Self-censorship has its benefits in crafting results. Censorship by another is more questionable. I see nothing wrong with guiding the experience of a reader, suggesting one book before another, based on study, discipline, age, etc., yet the actual act of censoring what a writer writes cannot benefit the art and progression of expression.

The writing that shocks and disturbs me is often the most influential. It seems a well-read public would reach greater heights than its dumbed-down alternative, but would be far less easy to control.

Have you ever been arrested? Care to discuss?
I’ve only been arrested once, for driving with an expired license. I have been roughly handled by police at protests, clothes ripped, threatened, etc. but these provocations have yet to have ended in arrest. I begin my book US (a.) with an image of my mother being arrested at a protest in 1963. We grew up hearing about this image, how it had been on the cover of The New York Herald Tribune, how my father had been arrested at another protest on the same day, but my parents never kept a copy. My cousin reached out last year with a link to an image on eBay. “Isn’t this Aunt Juanita?” I had just come home from a protest.

Obsessions are influences—what are yours?
I’m obsessed with living/work spaces. I grew up in a house that was built by Stanford White and seem to have subconsciously drawn from the space. I now seek out well-crafted, warm, sometimes ornate, spaces to work and live.

Nowadays I obsess over peace and days without turbulent distractions.

What’s the most daring thing you’ve ever put into words?
Each project, book or album, usually contains a phrase or idea that, at least for a second, I consider reckless and frightening to share. My initial fear is either because I feel it crosses some line from which there is no turning back, something I will have to live with, or because I am playing with voice and have found some turn of phrase that feels great, albeit slightly out of character. For this purpose, I sometimes attribute the voice to a character—Niggy Tardust (the song “Tr(n)igger” was one of the last written for the album and I definitely questioned whether it was too provocative), “Martyr Loser King” (before conceptualizing it as an album and graphic novel, it was the title of a collection of poems for children I began to write after being commissioned to submit a few for Nickelodeon’s Black History Month. My agent received a heated response from one editor who was “shocked and offended.”) Subject-wise, the “daring” is most commonly in relation to religion, sex, or race. The attitude is usually flippant. The fear usually turns into excitement or relief at having finally said it. The risk is always exposure. The most recent, in US (a.), is a poem that begins:

I have never fucked
a louder bitch
than freedom
on her cycle.

While the notion of the public intellectual has fallen out of fashion, do you believe writers have a collective purpose?
Yes. Our collective purpose is in chronicling human thought and experience. We also hold heavy stock in illuminating possibilities. The articulation of the critique informs the rebellion which brings us closer to the just system. Because of the role that the written word has played in Occidental thought and institutions, rethinking becomes as important as rewriting, unlearning. The role of the writer is the role of the thinker, the jokester, the dancer. It informs freedom.

What book would you send to the leader of a government that imprisons writers?
Hmmm.

There are just 5 days left to RSVP for PEN America’s town hall, “Writers on Self-Censorship” on Wednesday, 12/8 at 7PM ET, for a deep dive into self-censorship, featuring a panel of exceptional writers. Register for FREE today: https://bit.ly/2Z0Ikgn.