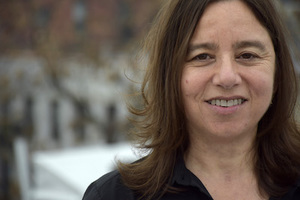 The PEN Ten is PEN America’s weekly interview series. This week, we’re republishing our 2016 interview with Sarah Schulman. A multifaceted writer, journalist, and AIDS historian, Schulman is co-founder of the ACT UP Oral History Project and the MIX NYC Queer Experimental Film Festival. An active member of PEN America, Schulman is Distinguished Professor of the Humanities at College of Staten Island (CUNY), a fellow at the New York Institute for the Humanities at NYU, on the Advisory Board of Jewish Voice for Peace, and faculty advisor to Students for Justice in Palestine.

Schulman will participate in PEN America’s Reading for AIDS Remembrance this Thursday, June 22, at the AIDS Memorial in NYC.

When I was six I wrote down, “When I grow up I will write books.” So, I always knew. I experience this drive as a calling, something neurological.

My parents had the cast album of The Threepenny Opera because a guy from my father’s home town—Elizabeth, New Jersey—was in the chorus. I was addicted to this record. I listened over and over, and finally I got my father’s typewriter and started typing out the lyrics. I was so connected to the lyrics that I needed the experience of physicalizing them.

What actually happened. The order of events.

Too many to choose from, although “A Woman’s Life Is a Human Life” was up there.

If you mean by a government, I would say never. The real question is what drives the desire to consume another person’s humiliation, and that is worth facing and understanding.

Not much beyond the responsibility of anyone else.

1979: Mob Action and Resisting Arrest. For opposing the University of Chicago giving Robert McNamara an award for “international understanding.”

1982: Disruption of Congress. For interrupting a Congressional anti-abortion hearing for a bill called the Human Life Statute that would have outlawed abortion and many forms of birth control. A witness was testifying that “a fetus is an astronaut in a uterine space ship,” and five other women and I jumped on our chairs and said, “A Woman’s Life Is a Human Life.” The arresting officer, Billy Joe Pickett, testified that I had said, “Ladies should be able to choose.” I think that the idea of a woman’s life being a human life was too complex.

1991: Resisting Arrest. For participating in ACT UP’s Day of Desperation action at Grand Central Station to oppose the start of the First Gulf War. Our demands were: “Money for AIDS, Not for War,” and “Fight AIDS, Not Arabs.”

1990s: Resisting Arrest. Arrested five times with the Irish Lesbian and Gay Organization for trying to march in the Saint Patrick’s Day Parade, which banned gay Irish people from marching under their own banner.

1992: Fare-beating. My girlfriend and I were very late, and the line for the token booth at Astor Place was up the staircase, so we ran through the gate and jumped on the train. We were arrested, handcuffed, marched through the East Village, and put in a cell underneath the Union Square station. When I went to court, I was sentenced to one day of community service for ACT UP.

“The Transformation of Silence into Language and Action” by Audre Lorde.

Listening, noticing, and understanding are desirable and necessary goals. A corporation wanting your Social Security number is an entirely other matter.