The PEN Ten with Saleem Haddad 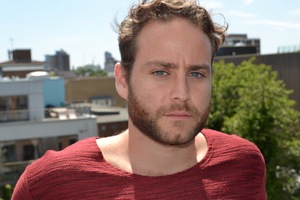 The PEN Ten is PEN America’s weekly interview series. This week, guest editor Randa Jarrar speaks to Saleem Haddad, a writer and aid worker. He was born in Kuwait City to an Iraqi-German mother and a Palestinian-Lebanese father, and has lived in Jordan, Cyprus, Canada and the U.K. He has worked with Médecins Sans Frontières (Doctors Without Borders) and other international organisations in Yemen, Syria, Iraq, Libya, Lebanon, and Egypt. In addition to writing, he currently advises international organisations on humanitarian and development issues in the Middle East and North Africa. His first novel, Guapa, is out now from Other Press.

Haddad will be participating in the events Literary Quest: Westbeth Edition on April 28 and The Fictional Other on April 30 at the PEN World Voices Festival.

I have always been an avid reader, probably driven by the desire to escape the life I was living and also to understand it. My parents indulged my love for books, but the notion of “being a writer” was not something that was ever entertained by my practical, middle-class Arab parents. But I distinctly recall a moment when I rediscovered the power of words. I was working with Doctors Without Borders; it was 2009, and the Sudanese government had expelled the organization from Darfur, shutting down life-saving medical programs. We needed someone to write an op-ed to be published in the Arabic media that pleaded with the Sudanese government to let us resume our programs. I wrote the op-ed quickly. It was emotional and from the heart, rather than analytical and strategic, and although I knew it was not “professional,” I felt that we were running out of options, and I wanted to capture the heightened sense of emotions that were running through the veins of the organization at the time. When I sent it to the head of the Sudan mission, she burst into tears. Seeing my words have such an effect on someone, I thought that perhaps I had some value as a “writer.” After that I was hooked.

I’d love to steal the political astuteness of Ghaith Abdul-Ahad and the muscular sentence construction of Lydia Davis.

If something is going to upset your grandmother. I’m lucky mine can’t read English.

Writing Guapa, which touches on issues of sexuality, politics, and revolution in the Arab world, was a gut-wrenchingly daring experience as a whole, especially since I felt the novel could only be written if I made sure to be truthful in everything I wrote, even if it brought me shame or embarrassment. There’s one scene in the novel where the main character recalls his experience being bullied in school, and how he would often go home and masturbate to the thought of the bullies. I wrote this down and felt incredibly ashamed afterward. I nearly deleted it. It might seem surprising that I see this as the most daring thing I’ve written, given I’ve written a queer Arab novel and published it under my real name. But I felt there was something in that specific scene that touched a nerve for me: about cruelty, desire, and fear, and how the abused can be aroused by their own humiliation.

I’m obsessed with characters who do not fit into easy categories: Western aid workers who are driven by contradictory feelings of guilt and power; anti-imperialist homosexual Arabs who find themselves stuck between politics, identity and desire; multicultural families at the crossroads of global art and global war. I am fascinated by the echoes between personal and political upheaval, the relationship between self and politics, and how turmoil in one area can reverberate in the other. I’m interested in how politics changes the lives of people, and how people—driven by internal desires and fears—go on to change politics. My writing is heavily influenced by my own trauma around the dangers of simplistic labels—gay, Arab, immigrant—and the effect this has on representation and politics. My writing tries to unpack these labels, or else tear them down entirely, through characters that are often contradictory, conflicted, inhabiting different and often divergent worlds. I am also equally obsessed with reality television, and am in the process of finding an intellectual argument to back up this obsession.

To tell the truth.

Writers have a responsibility to hold a mirror up to their societies, and to force their societies to confront ugly truths about themselves. A key aspect of this is to be aware of your audience. When I write in English, I try to make sure that my writing holds a mirror up to the West as much as it does to the Arab world. To do otherwise would be a failure of morality.

It depends on who has more power: the observer or the observed? If it’s the former, then it’s surveillance.

Not arrested, but I’ve been detained and interrogated. As an aid worker and an Arab, this happens quite often. I was briefly arrested on the border between Syria and Lebanon once, back in 2003. Apparently my name was on some list of draft-dodgers in Lebanon. They put me in a back room for about 30 minutes and then let me go after I promised to get it sorted out.

I’m not interested in changing the views of leaders, let alone a leader who imprisons writers. I’m more interested in a communication with people suffering under bad leadership.