The PEN Ten with Saïd Sayrafiezadeh 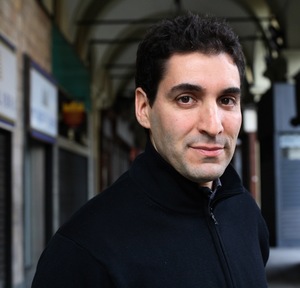 The PEN Ten is PEN America’s biweekly interview series curated by Lauren Cerand. This week Lauren talks to Saïd Sayrafiezadeh, the recipient of a Whiting Writers’ Award, and most recently the author of the story collection, Brief Encounters with the Enemy, and of the memoir, When Skateboards Will Be Free. His short stories and personal essays have appeared in The New Yorker, The Paris Review, Granta, McSweeney’s, The New York Times Magazine, and The Best American Nonrequired Reading, among other publications.

When I dropped out of college at twenty-one. I was still a long way from actually being a writer, but my somewhat impulsive act was an indication of an emotional commitment to a career. It was a commitment I was compelled to live up to, even as I worked in restaurants, cafeterias, and for Martha Stewart.

James Baldwin’s nonfiction. The problem, of course, is that in order to appropriate his nonfiction I would have had to live his life that was the subject of his nonfiction, and I wouldn’t have particularly wanted to grow up black, gay and poor in the United States in the forties and fifties. If it’s not easy now, imagine what it was like then.

On my laptop in the living room. After I eat breakfast I clear off the table and wheel in my ergonomic chair which I have to keep in the bedroom for space reasons. The light is nice in the living room, and it’s near my stereo so I can listen to Howard Stern when I get bored. Then in the evening, I turn off my laptop and wheel away my chair. It’s as if nothing has happened.

Never, thank god. I was stopped by the police years ago because a car had been stolen in the neighborhood. It was late at night and I had to stand there while they shined a flashlight in my face, but then they let me go. I had an inkling of what it must be like for many of my black friends who had to contend with this type of treatment on a frequent basis, some of whom were indeed stealing cars.

The Office (American version). I watch it wearing wireless headphones so as not to disturb my wife who considers my viewing of the show borderline compulsive. I’ve seen every single episode (until Steve Carrell left), many of them multiple times, and some scenes dozens of times. The storytelling is excellent, it’s funny, subtle and says something profound about life in a small, postindustrial American city. I think I’m nostalgic for my days working in an office (where I met my wife), although I’d never want to return to that. Prior to The Office I was obsessed with COPS, but that’s a subject for another discussion.

My memoir, When Skateboards Will Be Free, about growing up with parents who were members of the Socialist Workers Party. It cost me my relationship with my father. But it was worth it.

To tell a good story. Any other responsibility would be meddlesome.

No. Although, I’ve occasionally mused that all the books ever written are emerging from the same brain, which in some ways they are. I haven’t fleshed it out any further than that.

In fact, I knew an imprisoned writer, the Iranian poet and literary critic Reza Baraheni who was a friend of my mother and father, and an associate of the Socialist Workers Party. In 1973 he was arrested for political treason and tortured by SAVAK, the Shah’s secret police (back when the United States was an ally). PEN America was among the human rights organizations that advocated for his release, which he received after 102 days in prison. The Crowned Cannibals: Writings on Repression in Iran (with an introduction by then PEN President E.L. Doctorow), recounted his ordeal in essays and poetry. I read it when I was about eight years old. Why I had the book in my possession, I don’t know, because I was far too young to be reading poems like:

Maybe the question should be, what message would an imprisoned writer have for me?

Yertle the Turtle seems a good cautionary tale for any American president.