The PEN Ten with Rob Spillman 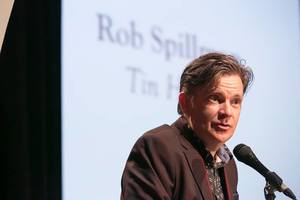 The PEN Ten is PEN America’s weekly interview series. This week, we speak with Rob Spillman, editor and co-founder of Tin House and recipient of the 2015 PEN/Nora Magid Award for Editing, as well as the inaugural VIDO Award given by VIDA: Women in Literary Arts. He edited Gods and Soldiers: The Penguin Anthology of Contemporary African Writing and is currently a lecturer at Columbia University. His memoir, All Tomorrow’s Parties, is forthcoming from Grove Press in 2016.

When did being a writer begin to inform your sense of identity?
When I was 22, I was in graduate school at the University of Arizona, studying sports psychology, but secretly I wanted to be a writer. Although I had worked in a used bookstore during my undergraduate years, I didn’t think a nobody like me could make it in New York. It took going to the desert to finally give myself permission to be an apprentice writer. I dropped out of grad school and moved to New York City with $150 in my pocket.

Whose work would you like to steal without attribution or consequences?
All writers steal and borrow, consciously or unconsciously. We are made up of everything we have ever read. That said, I would love to cop Mary Ruefle’s compression, clarity, joy, and ability to fearlessly look into the abyss.

When, if ever, is censorship acceptable?
I’ll get back to you after I get a PhD. In the meantime, I would say that literature should never be censored. In public forums, threats of violence to individuals should result in the removal of the speaker from the forum.

Have you ever been arrested? Care to discuss?
When I was 10, I was charged with “drunk and disorderly conduct.” It was after an opera cast party in Chautauqua, New York, and the private security officer nicknamed “Supercop” charged everyone in the van I was in, but was so intimidated by the big baritone driver that he only got my name and didn’t see that I was a (non-drunk) kid. When I went to court, the judge made fun of poor “Supercop” and the case was thrown out.

Obsessions are influences—what are yours?
Music has been a constant obsession, and some of the bands I have on repeat have included the Velvet Underground, Joy Division, PIL, Pavement, My Bloody Valentine, Fela, Nick Cave, Le Tigre, Courtney Barnett, Sonic Youth, to name a few. Literary obsessions include Elizabeth Bishop, Ken Kesey, Greil Marcus, James Baldwin, Joy Williams, Robert Stone, Virginia Woolf, James Agee, and Frank Conroy. My creative life is infected by my obsession with long-distance biking and running. I have run across the Grand Canyon, 23 miles from North Rim to South Rim, and earned a silver belt buckle for completing the Leadville Trail 100 high-altitude mountain-bike race.

What’s the most daring thing you’ve ever put into words?
My memoir, which comes out in April. It took me 10 years to write it. I wanted to get it right because I knew I would have to show it to my parents. Which I just did. It was a painful experience (there is a lot of difficult material they didn’t know about), but both of them had invaluable insights which helped the book.

What is the responsibility of the writer?
To be truthful.

While the notion of the public intellectual has fallen out of fashion, do you believe writers have a collective purpose?
As Chimamanda Adichie says, “There is no one story.” But I do believe there is a collective purpose to telling the stories that people know to be true, but that they have not yet been able to articulate, or are afraid to articulate.

What book would you send to the leader of a government that imprisons writers?
The collected Calvin & Hobbes comics. A little joy and irreverence might help. But I believe more can be done by sending books to the imprisoned and to those living in a repressive society. I grew up in West Berlin at the height of the Cold War. The Stasi (the East German secret police) weren’t reading 1984 or One Flew Over the Cuckoo’s Nest, but those books were passed around by ordinary citizens and certainly influenced those who eventually overthrew the Eastern Bloc governments.

Where is the line between observation and surveillance?
Intent to control, as well as an intent to create an environment of hesitation and self-censorship.