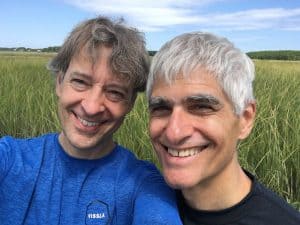 The PEN Ten is PEN America’s weekly interview series. This week, in celebration of Banned Books Week 2017, we’re publishing a series of interviews with writers whose books have been challenged or banned. Today we feature an interview with Peter Parnell and Justin Richardson, authors of the children’s book And Tango Makes Three.

Peter Parnell: Before I could read or write, I would dictate stories to my mother, who would write them down on giant pieces of tracing paper, to which I’d add my illustrations. One day, our next-door neighbor asked me what I had been doing, and I told her, “I’ve been writing a book.” “After you finish it, are you going to get it published?” she asked. I had no idea what getting something published meant. But when she explained that it was a way for me to get my story read by as many people as possible, I thought that sounded like a great idea. I think that was the first inkling I had that it might be fun to be a writer.

Your children’s book And Tango Makes Three, about the true story of two male penguins that raised a baby penguin, made the Top Ten Most Challenged Books list as early as 2006 and as recently as 2014. Challengers criticized the book for being “anti-family” and “promoting the homosexual agenda.” What was your initial reaction to the news that it had been challenged?

Parnell: We were very upset about it. We had anticipated there might be negative reactions along with positive ones. But the initial responses to the book, reviews and readers’ comments, etc., were so positive that for a time we were pleasantly surprised. Then, about a year or so after the book was published, a news article got picked up by the Associated Press about a librarian moving the book to the nonfiction section of the library after parents of a child complained. This was in Missouri. The story gained notoriety, and the news was suddenly everywhere. And more cases began to pop up. It was the year of March of the Penguins; the book got caught in the short hairs of the culture wars, you might say. The American Library Association, then headed by the late Judith Krug, became instrumental in fighting the book’s censorship. We made many friends along the way.

What book(s) do you wish you had access to as a child, but didn’t?

Justin Richardson: The books we wish we had access to as children hadn’t been written yet. The Story of Ferdinand and Free To Be… You and Me came close, and we’re glad to have had them.

Parnell: The only obsession I have is buying books. This doesn’t always include reading the books I buy. It’s just the buying that gives me a thrill. Now that we have a daughter, my obsession has expanded somewhat to buying books for HER. I suppose the way this influences my own writing is that I get my research information primarily through reading, rather than through direct experience. A rather cramped way of dealing with the world, I guess, but there it is.

Richardson:  It’s from Tango: “Mr. Gramzay thought to himself, they must be in love.”

Parnell: In my late twenties, I wrote a play that depicted gay relationships among various historical and literary figures. It was fun and impudent and I think was daring for the time.

What is the responsibility of the writer? Of the writer of children’s books?

Richardson: Primarily, to continue writing and to not self-censor. We feel the responses to a particular challenge is best left to organizations like the ALA, the ACLU, PEN America, and PEN International and to those local watchdog groups where the challenge has occurred.

Parnell: And Tango Makes Three was banned by the Minister of Culture of Singapore a few years ago, who ordered all copies of the book pulped. The pulping of books struck many as particularly insidious. There was an outcry by the writers of Singapore, as well as by many parents and children. They staged a protest in front of the government offices in which the book was read aloud. The Minister of Culture rescinded his order to destroy the books.

I’m a member of the Dramatists Guild, which is not a union but a guild made up of playwrights and composers from all around the country. Our motto is “Your pen. Our sword.” We deal with issues of censorship and copyright all the time.

Parnell: In The Night Kitchen by Maurice Sendak.

Richardson: The Witches by Roald Dahl.

What book would you send to an individual or institution that bans or challenges diverse books?

Speaking of censorship—when, if ever, is censorship acceptable?

Richardson: Discretion is acceptable. Sensitivity is important. But censorship has no place in our public life.