The PEN Ten with Óscar Martínez 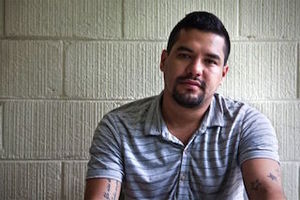 The PEN Ten is PEN America’s weekly interview series. This week, we speak to Óscar Martínez, author of The Beast (Verso, 2013) and A History of Violence (Verso, 2016). For ten years, he has covered violence and migration in the United States, Mexico, and northern Central America. Martínez writes for ElFaro.net and is a founding member of El Faro’s project Sala Negra, a research team specializing in organized crime, gangs, and violence culture in Central America.

Óscar Martínez will be participating in La Frontera: A Literary Salon on April 30 at the PEN World Voices Festival.

In the case of a good journalist, your identity is engulfed by what you do. Being a journalist—like being a priest, or a soldier, or a member of the mafia—is a full-time job. One isn’t a journalist for only eight hours a day only to stop being one when one returns home. One is a journalist 24/7. Not many journalists understand that they also have to be good writers. Many of them think that the main part of this job is obtaining the information. Many of them have such good material that they just vomit onto the page and waste. One understands that he also has to be a good writer when he begins to suffer bitterly against the blank page. When writing makes you uncomfortable, then you are on the right track.

This is always a tricky question, because if I answer it within a month the response will be different, but I’ll answer it today. I’d like to steal a lot of paragraphs from [Gay]Talese and from Leila Guerriero. I’d like to steal stories from Alma Guillermoprieto. I would like to be something that I will never be: a poet, but not just any poet. I would like to have written Roque Dalton’s poems. All of them. I’d like to steal a lot of the stories from my colleagues on the investigative research team Sala Negra, from ElFaro.net. I would like to have written some books of nonfiction and fiction: El Hambre; The Fall of Baghdad; the Dirty Habana Trilogy; Heart of Darkness; Nothing, and So Be It; The Savage Detectives. I could go on, but I’ll stop here.

When you’re certain that your words will kill. On one occasion, I ended one of my stories by saying: “In front of me, the most powerful story of all the ones I heard during these three months of investigation. It’s six pages in my notebook. Two hours of recording on my phone. It’s a story that I will not tell. If I tell it, I’ll kill them.”

The responsibility of the journalist as a writer is what Tomás Eloy Martínez said: Make what is important, interesting.

I don’t think so.

I’ve been arrested many times—most of the time for being an idiot. I’ve only been detained by the police of El Salvador once for my journalism work. I was coming back from interviewing a hit man who was going to accuse two policemen of murder. Another time, I was detained by a group related to Los Zetas [a Mexican criminal syndicate] in Tamaulipas, Mexico.

I wouldn’t send any books. I’d send an army.

Observation implies your own view, an interpretation of what you saw, an intellectual exercise. Surveillance is the following of something registered, very similar to what a dog could do if it knew your scent.