The PEN Ten with Oddný Eir 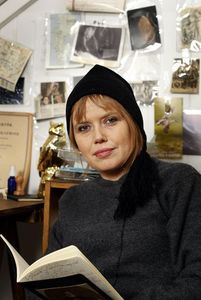 The PEN Ten is PEN’s weekly interview series. This week, we speak with Oddný Eir an Icelandic author whose novel Land of Love and Ruins won the EU Prize for Literature and the Icelandic Women’s Literature Prize, and will be out on October 25, 2016. In addition to publishing four novels and several books of poetry and essays, she has worked in the art world as a lecturer and gallerist, has been an environmental activist, and has collaborated with the musical artist Björk in composing lyrics for her albums Biophilia and Vulnicura. She has received advanced degrees in political philosophy from the University of Iceland and the Sorbonne. Oddný Eir lives in the Icelandic countryside, by the glacier Eyjafjallajökull.

I was given a second name, Eir, so that together my two names would make a sharp point made of copper (also signifying other things, Eir being the pagan goddess of medicine) in case I became a writer. My parents must have had the idea already when I was born, I don’t know how or why. Maybe it was a joke. But I guess this private joke informed my early sense of identity. Then, during puberty, I felt the urge to write; I had read The Diary of a Young Girl and thought I had an obligation to make the days beautiful as she did in her dramatic and almost-hopeless situation. But I started publishing rather late, so I didn’t let this identity totally inform me until just recently.

I would not like to steal any work, both because of some kind of loyalty to the work of every author, and also because of my own self-esteem, which strangely allows me to think of my own work as enough for me. I have the feeling that my life will not last long enough for me to publish all the books that are inside my head and heart. But okay, if you’re asking about intimacy and desire, I would maybe mention Friedrich Nietzsche, since I’ve actually thought he stole something from me…How very strange to read a text that you feel you could have written yourself! I feel ashamed to mention those texts, so much better are they than I could ever dream of writing, but this uncanny feeling rose when I read…well, no, I’ll not mention them!

I am obsessional in general, and of course I’m obsessed with words and corrections, but my main source of influence is olfactive, my obsession touches a large scale, from pee to perfume. I would maybe be classified as an olfactive pervert.

I’m quite sure that the most daring thing was about sex. Though I also think that the way I write is maybe the most daring thing, that is, the way I refuse to write in one genre or one way. I like to write in the space that is just before violence, just before incest or perversion, where there is still so much beauty that the space can be called love. In my autobiographies, I wanted to challenge the male tradition of writing big stories. At the time, it seemed a little daring to write about a life of “no importance!” But every life is important. Instead of writing of my life as a big drama, I wrote about all kinds of difficult experiences, like sexual violence and intense anxiety, as if it were some kind of a surreal puppet theater. It was also quite daring, it seemed, to talk about infertility as I did in my book The Blue Blood. In my novel, Land of Love and Ruins, I wrote about the love between me and my brother but in an almost secret code, influenced by the private or secret languages that are developed in totalitarian countries like Hungary, where I lived, where a friend of mine referred to people as animals, and where only close friends would know who was who. I was maybe daringly hoping that the reader would still understand something of how love makes home in strange places. But then yes, I think I was the most daring in my latest novel, where I attempted to be erotic in a feminine way, challenging both pornography and erotic poetry. Yes, I had to get through layers of shame as I wrote the intense sex scenes. My protective shield was not puppetry this time but chess. How erotic is chess?!

I don’t think it ever is acceptable. But I need to make a distinction here between editing and censorship. I’m afraid that these two different things are often confused, at least here in Iceland. Well, and yes, I think that such violence as child pornography should be censored, especially from children.

I think that writers should be as different as they are many, and should really nurture the non-collective elements in themselves. But on the other hand, yes, I think writers have a collective purpose: It is to keep open a space in our languages to be able to express all feelings, all opinions. I think the writer is, as a writer, responsible only to words, but as a person he or she is responsible for all the world. It makes me think of the contradictory life of the Greek goddess Persephone—she did her job and led her private life in the light of the sun and then went underground to work for a collective purpose. I think writers must have some underground life of resistance. A secret revolutionary mission.

I was almost arrested when I was fifteen. When we, a group of young Icelandic girls, decided to go into the supermarkets and tell people about Nelson Mandela and his fight and why they should not buy products from South Africa. The chief of the supermarket was mad at us and threw us out! I was maybe hoping to be arrested, vainly, to be a little like Mandela…

Difficult question, good question. I think I would send them The Diary of a Young Girl. I don’t remember any other book for now, but I think most books that are written into the depth of our senses can open a closed mind, even if they’re not about anything particular. Well yes, maybe One Thousand and One Nights would be a good lesson.

The line is unclear, but suddenly becomes very clear when you discover that your government has totalitarian tendencies. It’s very interesting how an institution like the national archive, or any archive that is supposedly marginal and inactive in democratic states, suddenly becomes central and violently active in totalitarian states. And it’s the very same institution.