The PEN Ten with Natalie Graham 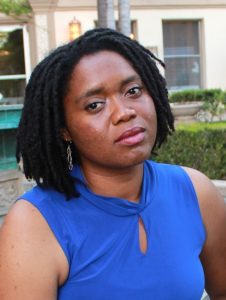 Marshell writes: “Beauty is a trap,” Natalie Graham says here, but it’s one she willingly falls into. Alive in this interview, and in her poems, are the beauty of language, her fascination with it, and the myriad curiosities that feed poetry: deep as family, light as lists, connected, unrelated, consciously or not. That energy is what fuels poetry, and that spark is palpable in Graham’s work.

When did being a writer begin to inform your sense of identity?
At least as early as third grade I recognized writing and reading occasional poems as a tradition in my family and church. My mom wrote poems and had them framed or engraved on plaques for family and friends to celebrate birthdays and anniversaries. I wrote and memorized short poems for holiday programs throughout elementary school. I didn’t realize it then, but now I see how it shaped my understanding of myself as inhabiting a world that always naturally included poetry. I also started the practice of journaling in sixth grade which still informs how I think of writing as an act of my own remembering and knowing.

Whose work would you like to steal without attribution or consequences?
I want to have Toni Morrison’s words in my head always, but if I stole them they’d lose their tenor. For me, more comes out of being in conversation with those I admire. Often my work is a response to theirs.

Where is your favorite place to write?
Most of my poems have been written in diners. I like the traffic of restaurants.

Obsessions are influences—what are yours?
Foodways, photographs, making lists, hip-hop, France, opening a restaurant, ballet, Abraham Lincoln . . . I’ve been obsessed with so many things and am always feverishly throwing myself into the compulsive adoration of one thing or another. Obsession isn’t adoration, but it feels like it. I’m sure the behaviors and rewards stimulate the same neural pathways.

What’s the most daring thing you’ve ever put into words?
My desires and aspirations. Usually they are private, but recently I’ve been telling folks things I want and hope to build.

What is the responsibility of the writer?
I think responsibilities continually change. Sometimes, I think writers have no responsibility at all. Other times, everything is my urgent duty; I lament my own inability to be more responsible, to create more art and opportunity. These days, though, I find myself thinking the responsibility is to unfold and reveal a thing in the most beautiful way. Beauty is a trap, but I can’t think of what else the writer is after. Even if they are chronicling villainy and trauma, the beauty of the telling is what provokes. I’m a formalist and idealist, perhaps a mystic, in that way. I think that every system of forms that we create has an ideal expression.

Has the role of the writer and artist changed at all?
I think the roles of writers and artists change constantly. They are various and dependent on their relationship to their community and history.

While the notion of the public intellectual has fallen out of fashion, do you believe writers have a collective purpose?
If so, it’s unknowable; I see so often individual artistic purposes at odds with each other. That’s healthy. It indicates that artistic expression as a collective can’t be bound.

What book would you send to the leader of a government that imprisons writers?
Assata: An Autobiography.

Where is the line between observation and surveillance?
One doesn’t have to be the intensification of the other. Surveillance implies threat and threat must be annihilated. Surveillance can’t exist outside of this trajectory. Observation is as various as the observer.

Has the role and importance of narrative changed in this new digital landscape where false narratives and fictions are taken as truth?
We’ve always had pervasive, false narratives. I don’t know how to quantify the magnitude of falsehood at any moment in history in order to compare one to the other. But it’s deadly important now, as it always was, that we do everything in our power to seek out, validate, and spread truth.

A native of Gainesville, Florida, Natalie Graham earned her M.F.A. in Creative Writing at the University of Florida and completed her Ph.D. in American Studies at Michigan State University as a University Distinguished Fellow. Her poems have appeared in Callaloo, New England Review, Valley Voices: A Literary Review, and Southern Humanities Review, and her articles are forthcoming in The Journal of Popular Culture and Transition. She is a Cave Canem fellow and assistant professor of African American Studies at California State University, Fullerton.

Kyla Marshell’s work has appeared in Blackbird; Calyx; ESPN;, Gawker; The Guardian; O, the Oprah Magazine; and SPOOK. Her work has earned her Cave Canem and Jacob K. Javits fellowships, two residencies to the Vermont Studio Center, and an MFA in Creative Writing from Sarah Lawrence College. In 2013, Ebony.com named her one of  “7 Young Black Writers You Should Know.” A Spelman College graduate originally from Boston, she grew up in Silver Spring, MD, Morehead, KY, and Portland, ME, and now lives in New York.

The PEN Ten with Carlina Duan

The PEN Ten with sam sax

"In an anti-Black world, self-love is this incredibly radical act." In a #PENOutLoud conversation, Saidiya Hartman spoke about how her reaction to police killings at the time of writing WAYWARD LIVES, BEAUTIFUL EXPERIMENTS influenced her storytelling: https://youtu.be/I0rHme5yWKE.

"Growing up a Black girl in America, I became aware of who was listening to me when I spoke. And who wasn’t—which was the world." In this #PENTen interview, we spoke with @mobrowne about her writing process and her advice for young Black writers: https://bit.ly/3euePGo.

Before @ReeAmilcarScott & @vcunningham's #PENOutLoud conversation, we put together this reading list of genre-spanning works by several incredible Black writers that consider power & memory in relation to contemporary & historical spaces: https://bit.ly/2kzxF87.