The PEN Ten with Moustafa Bayoumi 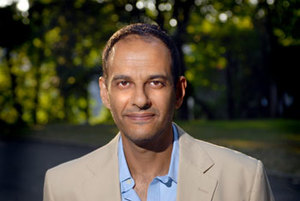 The PEN Ten is PEN America’s weekly interview series. This week, guest editor Randa Jarrar talks to Moustafa Bayoumi, whose latest book is This Muslim American Life: Dispatches from the War on Terror, published in September by NYU Press. He is also the author of How Does It Feel To Be a Problem?: Being Young and Arab in America, which won an American Book Award and the Arab American book award for Nonfiction. He teaches English at Brooklyn College, CUNY.

When did being a writer begin to inform your sense of identity?
After graduating from high school, I was in architecture school in Canada. In studio class, we had to design a simple hut that achieved the basics of human habitation. I wrote a poem instead. It was then that I realized I preferred to communicate ideas through language rather than the built form.

But is being a writer an identity? I’ve come to accept that it’s more of a condition. What’s identity today, anyway? Identities used to be based on one’s profession or place of origin or gender or political orientation. Identity was the introspective summation of one’s past experiences and future promise. Today, identities in late capitalism are increasingly algorithms of where we’ve been, what we’ve purchased, who we “like,” and how we brand ourselves and are branded by others. Identity has become a predictive science that defeats the spontaneity of human existence. But the condition of the writer is something different. It means living everything at least twice, because you are in this constant state of writing all the time. Often, it’s about composing prose in your head for what has just happened to you in life, and it never stops. The condition of being a writer is often exhausting, sometimes exhilarating, and completely unavoidable.

Whose work would you like to steal without attribution or consequences?
Umberto Eco once defined postmodernism as no longer being able to say “I love you madly” to someone, since that had already been written by the English romance writer Barbara Cartland and thus comes off as inauthentic. Eco’s solution was that you tell your lover, “As Barbara Cartland would put it, ‘I love you, madly.’” So, I guess I would like to steal the work of Barbara Cartland, which I have never read.

Obsessions are influences—what are yours?
In no particular order, a few would be: our capacity to ignore catastrophe until it is pummeling us in the face, recovering the human in the phrase “human suffering,” the absurdity of power, paragraph breaks, beauty, John Berger, Suad Amiry, Michael Ondaatje, Susan Sontag.

What’s the most daring thing you’ve ever put into words?
I have no idea. I write for many reasons, but being daring isn’t one of them. I’ve written pieces critical of the governments of the United States, Israel, Egypt, Saudi Arabia, and others, but I don’t do so out of daring. As an undergraduate many years ago, I read Edward Said’s The World, The Text, and The Critic. In it, he writes, “It is not practicing criticism either to validate the status quo or to join up with a priestly caste of acolytes and dogmatic metaphysicians.” That line has always stayed with me as a jumping-off point for writing.

When, if ever, is censorship acceptable?
Children ought to be protected from certain manifestations of human ugliness, so if that’s censorship, then it should be limited to the young. When governments censor, they treat their publics like children while hiding their own ugliness under the ruse of security or social acceptability. Artists should be free to express themselves however they see fit. If that opens the door to offensive speech, the answer is to call out the offender, not muzzle the speech.

What is the responsibility of the writer?
A writer’s “revolutionary duty,” as Gabriel García Márquez once put it, is “to write well.” The responsibility of a human being, on the other hand, is to practice compassion for others while growing justice in this world. Since (most) writers are human beings, writers carry that obligation as well, but as human beings, not as writers. Writing is the vehicle, not the mission.

While the notion of the public intellectual has fallen out of fashion, do you believe writers have a collective purpose?
Because we live together on this earth and not alone as atomized individuals, collective action is necessary to affect change. And when they come together, writers do have a collective purpose the way any guild does. Collectively, then, writers can and should advocate for the proper conditions of writing globally. The problem comes when society subcontracts the role of ethicist to writers, who, puffed up by the importance, are often quick to assume the position. But the responsibility for the ethical life is everyone’s charge, and that’s what writers collectively should be pointing out.

What book would you send to the leader of a government that imprisons writers?
Breyten Breytenbach’s The True Confessions of an Albino Terrorist. Breytenbach’s memoir of his seven years in various prisons during the apartheid era in South Africa is full of these tiny, soul-exploding moments, such as when, after a year and a half, he was finally handed a mirror. Can you imagine not seeing your own face for a year and a half? The loss of self would be devastating to anyone. To a politician, it would be like a death sentence.

Where is the line between observation and surveillance?
Power. Everyone observes, but few spy. While some people may observe life more closely than others, with few exceptions only states and corporations are involved in surveillance. Observation can produce wisdom; surveillance can only manufacture information. Observation illuminates the details that comprise a life, whereas surveillance seeks essentially to validate its own assumptions. And with the power to spy comes the ability to destroy. That is a truth worth observing.