The PEN Ten with Molly Crabapple 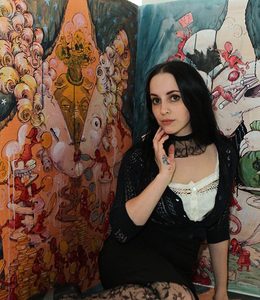 The PEN Ten is PEN America’s weekly interview series. This week, to celebrate the start of our 2017 PEN World Voices Festival, we are republishing a 2014 interview with artist and writer Molly Crabapple. Crabapple will address the role art can play in combatting political repression at her festival event Art and the End of Times with Molly Crabapple on May 5.

I always wanted to be a writer and in fact wrote a horrific embarrassment of a novel when I was 17 (thank you, internet, for not preserving this). I really got into the swing of writing professionally when VICE gave me a column in later 2012 to talk about anything, from abortion to courtrooms to being a naked model. After years of being an artist alone, and communicating through images, saying stuff got frankly addictive.

Where is your favorite place to write? To make art? Are they different places? If so, is there a reason?

Writing, in a hotel room with a bottle of scotch and a bottle of Black Blood of the Earth to drug myself up and down, because writing is sensory depravation. For art, in my studio, up till 4am with Fred and too many cups of coffee, when it just starts feeling right.

I got arrested once at Occupy Wall Street, which was an education for me, but not particularly terrible as arrests go, and certainly a million times easier than the daily reality of many New Yorkers, which is being arrested for walking while black.

What’s the most daring thing you’ve ever put into words? Into an image?

What is the responsibility of the writer? The artist? Is it the same?

Be honest and brave and try to make the world a bit more beautiful, which is in no way the same as making it more pretty (though that is also nice). But these are really human responsibilities.

While the notion of the public intellectual has fallen out of fashion, do you believe writers have a collective purpose? How about artists? Is it a shared purpose?

Artists in general are fabergé egg makers pretending to be revolutionaries. But I’m congenitally opposed to authority deployed unjustly and I’d yell about that whether I was a writer or artist or anything else.

What book would you send to the leader of a government that imprisons writers? What work of art would you like to show them?

Books don’t make people moral. If they did, Obama wouldn’t incinerate kids with drones. Instead, how about sending a book to an imprisoned writer or artist? You can mail imprisoned journalist Barrett Brown at