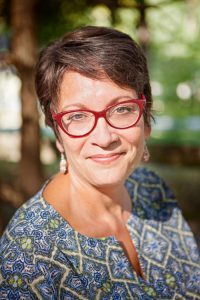 The PEN Ten is PEN America’s weekly interview series. This week, in celebration of Banned Books Week 2017, we’re publishing a series of interviews with writers whose books have been challenged or banned. Today we feature an interview with Meg Medina, author of Yaqui Delgado Wants to Kick Your Ass.

When did being a writer begin to inform your sense of identity?
I really didn’t start writing works for young people until after I turned 40, but the seed of that identity began in childhood. If we’re being very specific, the third grade, thanks to a teacher, Mrs. Zuckerman, who did a lot of creative writing with us. It was something that I was good at, and she was kind enough to notice and tell me. You can never underestimate the power of helping young people see their own talents, even if it takes a long while for the idea to bloom into a decision or life path. As I got older, I moved the idea of being a writer into a longing, a dream, but eventually, I decided it wasn’t something I wanted to forego.

Your YA novel Yaqui Delgado Wants to Kick Your Ass has been challenged most notably by Cumberland Middle School, who cancelled an appearance you were scheduled to make because of the book’s title. What was your initial reaction to the news that it was being challenged, particularly for the title?
Yes, it did get challenged there, and it has been challenged elsewhere, more recently in Fairfax County—also in my home state of Virginia, in one of its most progressive counties. My initial reaction is usually a pinch of embarrassment. It’s hard to be told that you are vulgar or that your work in some way presents a moral danger to children. I don’t believe that’s true, of course, but in that first moment, it’s uncomfortable. Ultimately, the feeling morphs into impatience with well-intentioned adults who create obstacles between kids and literature. What is comforting is when there is a good solution (as there was in Fairfax), with careful thought about the book, coordinated defense, and fair consideration for the families who want their children to read something else.

What book(s) do you wish you had access to as a child, but didn’t?
I am lucky in the sense that no one was telling me what I couldn’t read. I read wildly inappropriate things when I was young—even The Happy Hooker when I was 13 or so. And look—I turned out all right. I wish there had been more opportunity to read authors of culturally diverse backgrounds. It would have saved me years of thinking that I had to get beyond my culture to be successful or to be understood as valuable.

Obsessions are influences—what are yours?
I’m drawn to stories by and about strong women, and I’m drawn to stories from a range of cultural perspectives. They feel comforting and affirming to me. They feel illuminating. So, when I turn to my own work, I’m consciously continuing that celebration through the American Latino lens.

What’s the most daring thing you’ve ever put into words?
Writing the lives of girls and young Latina women feels daring because there are so many forces that want to shut it down.

What is the responsibility of the writer? Of the writer of YA literature?
We’re responsible for always telling the truth as best we understand it. When that intersects with writing for young people, we have other considerations, too. For me, it includes thinking about what the reader of a particular age is bringing to the work emotionally. We can absolutely write books that are about raw and troubling topics, but I think it’s up to the writer to consider the reader’s experience and write the truth in a way that respects kids’ development. That’s a tricky space sometimes.

While the notion of the public intellectual has fallen out of fashion, do you believe writers have a collective purpose?
I think we move through the world as witnesses. It’s our job to name the human experience so that we don’t forget the ugly and the truly beautiful. It’s our job to write the stories that invite a deeper look inside of ourselves.

What’s your favorite banned book?
So many books that end up on a banned book list are dear to me. The very fact that they startle me and force me to think is what makes me adore them. I’m always so shocked at what ends up there—everything from classics like To Kill a Mockingbird to Captain Underpants. But if you’re forcing me to choose, I’ll go with Julia Alvarez, How the García Girls Lost Their Accents.

What book would you send to an individual or institution that bans or challenges diverse books?
Hmmm, maybe Dick and Jane readers, which insult no one, represent no one, and inspire no thinking at all. That would serve them right.

Speaking of censorship—when, if ever, is censorship acceptable?
That’s the question we all wrestle with, especially since there’s such a wide range of ways to censor without an outright ban or challenge. For example: You can require a parental note to read a book. You can save the book for “special” kinds of readers, etc.

My basic view is that we should avoid throwing up obstacles between people and books and ideas.

However, it’s also true that I pause when I feel that cultural content presented in a book for young people is harmful or incorrect. I say this because marginalized communities have had their stories taken, told poorly, abused—you name it—without any regard to the lasting impact of those messages on the children who read them or on the communities portrayed. It’s a question of harm. But even as I say that, I know that people who are opposing The Bluest Eye talk about “harm,” too.  So, what do we do with those titles when we discover them? What do we do with classics that perpetuate harmful stereotypes? I wish there were an easy answer, but there isn’t one as far as I can see. There’s only a chance to consider things that fall into the gray zone and a chance to argue back and forth until we find the way forward. It’s tiring, maybe, but not such a bad thing.