The PEN Ten with Mat Johnson 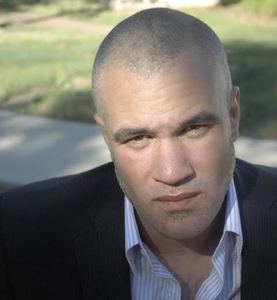 The PEN Ten is PEN America’s weekly interview series. This week, guest editor Randa Jarrar talks with Mat Johnson, the author of Pym and the graphic novel Incognegro. His upcoming novel, Loving Day, will be published by Spiegiel & Grau on May 26. Johnson is a Full Professor at the University of Houston Creative Writing Program.

When did being a writer begin to inform your sense of identity?
Oh sweet lord, I don’t know. When people started to treat me with respect and stop reacting to me like I was a big goon asshole? That part’s nice. Not to be a twit and turn the question around just to show you how deep I am, but it’s kinda been the other way around. I already had an identity, writing allowed me to clear a place in the world for it to exist. I’m a 6’4”, 230 lbs guy who looks like a Latvian rugby player, but I’m actually a black man of biracial descent. On the page, with Incognegro and Pym, and this new one Loving Day, I created a place for myself, so the world can see me coming.

Whose work would you like to steal without attribution or consequences?
How do you know I haven’t? But yeah, if I had to do it again, I’d bludgeon George Orwell and take his work, out of respect. I love the diversity of his bibliography, the strength of his essays, the fact that he wrote not just one but two truly great novels, Animal Farm and 1984, which is such a rarity. I also love that he didn’t limit himself to realism, which I never could. Orwell’s great novels epitomize what makes a novel truly great: wonderful stories elegantly told, whose meaning resonates long after the last word.

When, if ever, is censorship acceptable?
Right, just the easy questions. I think anything should be allowed to be written, legally. That doesn’t mean everything needs to be published, or everything merits a larger readership. But I don’t think that’s a legal issue. The attempt to destroy ideas is almost always futile, so censorship ultimately becomes less about controlling the ideas of the text, and more about performing a public act of symbolic social repression.

Have you ever been arrested? Care to discuss?
Fuck no. I say that not because there’s always shame in it, but because even saying that out loud scares the shit out of me. So not yet, thankfully. I participated in street protests a lot when I was younger, but never in something that got violent, or where the cops lost their cool. I managed to make it through high school without getting caught for the standard youthful, dumbass transgressions. I’ve always been petrified of prisons, afraid if I even visited one, I might not get out again. In part to get over that fear, I judged a prison writing prize last year. It’s shocking how much good writing is being done in prisons in the United States, due in part to the many prison creative writing programs.

Obsessions are influences—what are yours?
Currently?

Zydeco music: when I moved to Texas I started to get into it; I love the way it hybridizes African and European cultures and creates something entirely new. I can sympathize.

Pajamas: I decided it’s time to go to bed like a grown-ass man. It’s like a suit for sleep.

Discovered novels: I love reading my friends, I love reading my heroes, but I realized I missed walking into a bookstore, judging a book I’ve never heard of by its cover, and experiencing the euphoria of discovery. That’s how I got sucked into this whole world of words.

And of course Twitter: I have a love/hate relationship with it at this point, but it helped me find a voice, and probably a wider audience, so overall it’s been a positive. But it’s been seven years now, and at this point I threaten to quit weekly. I’m allergic to the Perpetual Outrage Machine.

What’s the most daring thing you’ve ever put into words?
This whole damn book I just wrote, Loving Day. I spent the first decades of my life overcompensating for my whitish appearance within the black community, rejecting mixed identity as an escape plan for self-hating blacks of mixed descent. Then as an adult, I slowly began seeing the merits of self-identifying as biracial, and eventually the need for it, despite larger ambivalence to it in the larger black community. So I was petrified to actually talk about this directly in my new novel. I know some old allies are not going to be happy. But art shouldn’t be about making people happy, or confirming their existing ideas. I had to say this, my truth. This book is my coming out as a mulatto.

What is the responsibility of the writer?
To speak her or his moral truth. That’s about it. Spreading ideas, notions of society and identity, that the author knows to be false, that is a failure of responsibility on the part of the author. Besides that, it’s wide open.

While the notion of the public intellectual has fallen out of fashion, do you believe writers have a collective purpose?
Do all writers share a collective purpose? I’d like to say, Yes, to speak their truth. But that would be naive. I think it would be more accurate to say that a majority of writers share one purpose: to share their own vision of truth to the world. And PEN helps us align our strengths to increase the odds that every writer will get their chance at that opportunity.

What book would you send to the leader of a government that imprisons writers?
1984, predictably. But sadly, I don’t think it would matter. I don’t think that book would be getting read, or that that leader’s mind is still in a position to reexamine its decisions. I’d rather send a book to that person’s opposition. To tell them they are not alone, that there is hope. That there is a larger world behind them. I’d rather send 1984 to that leader’s children, and the entire student body of their elite school, to show them how censorship ends.

Where is the line between observation and surveillance?
I’d think the difference is observation is noting one subject among many, while surveillance is gathering information on one subject with intent. But the larger issue is how do we resolve a world that values personal privacy, and yet suddenly has so much of our private messages and transactions available for analysis by governmental and corporate powers. I think ultimately there is going to be a balance in the trade off between privacy and the powers who would use everyone’s information for their vision of the greater good. But it may take a century for humanity to catch up with technology so a consensus can form.