The PEN Ten with Lisa Lucas 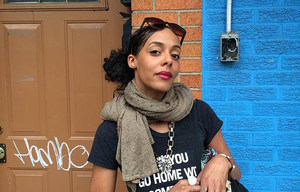 The PEN Ten is PEN America’s biweekly interview series curated by Lauren Cerand. This week Lauren talks with Lisa Lucas, the publisher of Guernica and the magazine’s first full-time employee.

When did being a writer begin to inform your sense of identity?
Age 9, when I realized I was a horrible writer. A teacher gave me an assignment to write a poem and like a good hand-raising nerd, I got right to work. In fact, I suffered for that poem. Turns out, it was atrocious. Even for a third-grader. My sweet father was the only person who could even fix his mouth to applaud that sad, sad poem. And so I retired forever, became a reader, and I’m quite pleased with the outcome.

Whose work would you like to steal without attribution or consequences?
Gwendolyn Brooks.

Where is your favorite place to read?
I prefer to read while in transit—riding a bus, a plane, a train, while walking.

Have you ever been arrested? Care to discuss?
Never once. My parents are very grateful for this.

Obsessions are influences—what are yours?
Jazz singers. 1940s melodrama. The midterm elections. The history of African-American comedy. Comic books. The 1970s in general. Those are just a few. I’ll obsess about anything. The present seems less interesting sometimes.

What’s the most daring thing you’ve ever put into words?
I leave the daring to the writers. They’ve got the bravery thing on lock. I’ll stick with being bold in my private journal.

While the notion of the public intellectual has fallen out of fashion, do you believe writers have a collective purpose?
Collective purpose seems a bit unified for such a varied and independent lot – but I do think that there’s something to how hard it is to write, to tell the truth, to publish, and to make a living doing so that brings folks together.

What book would you send to the leader of a government that imprisons writers?
Is there a beautiful collection of every single essay that James Baldwin has ever written? That.

Where is the line between observation and surveillance?
It is, at best, impolite to read other people’s private correspondence

Oh nothing…but treasuring my time with @CoryBooker and @minjinlee11 for @PENamerica Gala!

The evening’s celebration will get started soon! Tune into the 2022 #PENgala LIVE at 7:30PM ET: https://youtu.be/yImyr9NUWf4

We are honored to have Vladyslav Yesypenko’s family join us at the #PENgala tonight. They will be accepting the PEN/Barbey #FreedomToWrite Award on his behalf in recognition of his courage and vital work as a journalist in Ukraine.