The PEN Ten with Ladan Osman 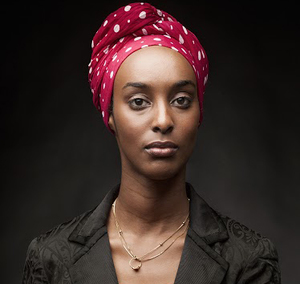 When did being a writer begin to inform your sense of identity?
Only a few years ago did I begin to see the relationship between my exiled body and my yearning to connect via language. Once, my mother told me she wanted to write a letter to a dictator. I asked why she didn’t. She said: “I am who? Besides, I was in another country at the time, and I’m not a poet.” I write partly because my parents said in many ways they had no space to be still, to think. Space to meditate and create is power. The more I come into that power, the more I recognize its demand. I’m never really writing for myself or by myself.

Whose work would you like to steal without attribution or consequences?
Toni Morrison’s allegory and Jamaica Kincaid’s lyric have a baby, and I run away with it and call it my own.

Where is your favorite place to write?
I mostly write at two desks, at home. One desk is by two huge windows, in the kitchen. My other desk is in the office, facing the wall (like Patricia Highsmith, haha) but with a fire escape off the window. This space is better for long, concentrated writing. There are fewer distractions, and it’s easy to get fresh air, dance on the fire escape, bird-watch with my binoculars. I write at the Garfield Park Conservatory and libraries but my own desks usually have all the tools I need: books, almost excessive natural light.

Obsessions are influences—what are yours?
Water. The primordial. People excluded from the record. War and commotion, failure of the state, what some would like to call failure of a nation, of a people. Ceremony and ritual.

What’s the most daring thing you’ve ever put into words?
A few times I’ve told people they must be sure about me. A lot of my book acknowledges that I was lonely while not alone. Whenever I’ve repeated the holy commands: Be! Write! Recite!

What is the responsibility of the writer?
I feel responsible for producing the best possible artifacts, for seeking increasing levels of understanding and specificity, for trying to distill and clarify aspects of human experience.

While the notion of the public intellectual has fallen out of fashion, do you believe writers have a collective purpose?
The act of invention is an act of faith. And the language of law seems concerned with asserting the immaterial, asserting order, so there are many parallels to creative work. I think that’s why artists are so dangerous to regimes: revolution requires faith, must be followed with generation—new story, new ritual. I think the requirement of creative pursuit, which is a privileged one, is service. Our best work, to the best of our ability. We’re responsible for serving others in expanding rings of intimacy: self, family, nation, eras we consider in imagination.

What book would you send to the leader of a government that imprisons writers?
Neruda’s The Book of Questions. May the desire for answers cause that leader to release the people whose expertise is interrogation and dialogue.

Where is the line between observation and surveillance?
It’s hard for me to believe the line between the two isn’t a little too fluid. I think about the abstract sciences a lot, what it means for the gaze to affect, if not to create, the object altogether. So often we are stuck in contracted stories, or keeping others in manageable narratives. We look, but what are we looking for? How does the point of origin inform the gaze? It appears a government is incapable of determining this line for its citizens.

Check out @narrativemag's interview with @PamelaPaulNYT about reading, writing, and a small excerpt from 100 THINGS WE'VE LOST TO THE INTERNET. Join us for a #PENOutLoud conversation with Pamela on 10/26: https://bit.ly/3Aai2Wf. https://bit.ly/3aQVkHv

The Ursula K. Le Guin Literary Trust will award the first-ever Ursula K. Le Guin Prize for Fiction in 2022, seeking to recognize "realists of a larger reality, who can imagine real grounds for hope and see alternatives to how we live now." https://bit.ly/2YYEhRO