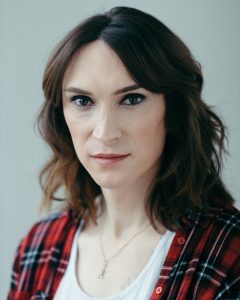 The PEN Ten is PEN America’s weekly interview series. This week, in celebration of Banned Books Week 2017, we’re publishing a series of interviews with writers whose books have been challenged or banned. Today we feature an interview with Juno Dawson, author of This Book is Gay.

When did being a writer begin to inform your sense of identity?
This Book Is Gay was so vital for me on a personal level. It was while writing that book that I sat down to interview a number of transgender people. It struck me quickly how their experiences and thought processes echoed my own. Without that book, I might never have understood who I really am.

And This Book is Gay was challenged in 2016 when residents in Wasilla, Alaska, proclaimed that they didn’t want “gay books” in the library. What was your initial reaction to the news that it had been challenged?
I was amused initially as the people of Wasilla just created a whole bunch of publicity that we didn’t have to pay for! But then, as it sank in, I realized the young LGBTQ people of Alaska were being told they were somehow wrong, somehow inappropriate. And that made me really mad.

What book(s) do you wish you had access to as a child, but didn’t?
Oh definitely This Book Is Gay. Pretty much anything by David Levithan or Patrick Ness.

Obsessions are influences—what are yours?
Horror films, my friends, my fandoms.

What’s the most daring thing you’ve ever put into words?
There are parts of The Gender Games, my memoir, which are incredibly personal. To be honest, when you’re from a minority group, just having a voice and a platform is seen as daring to some.

While the notion of the public intellectual has fallen out of fashion, do you believe writers have a collective purpose?
I see myself as a storyteller. I think it’s a universal language we all speak, and stories have the power to unite us as a race.

What’s your favorite banned book?
It’s unthinkable that Anne Frank’s diary was once a banned text.

What book would you send to an individual or institution that bans or challenges diverse books?
The sheer concept of challenging or banning books is so ludicrous I can’t really engage with that.

Speaking of censorship—when, if ever, is censorship acceptable?
Obviously much was made of S&S cancelling Milo Yiannopoulos’s book. There’s a key difference between free speech and hate speech: Yiannopoulos has the right to say what he wants unless he’s inciting hatred or violence. That—at least in the UK—is an offence. However, people like him have no right to a book deal or a platform. Publishers, book shops, and libraries must follow the same laws about hate speech and inciting violence. This is why, if an institution chooses to ‘ban’ one of my books, I have to accept that. I have no right to that platform, although I strongly feel nothing I said incites hate, quite the opposite.