The PEN Ten with John Murillo 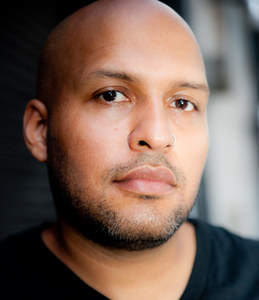 The PEN Ten is PEN America’s weekly interview series. This week, guest editor Nicole Sealey speaks to poet and playwright John Murillo. The son of an African-American father and a Mexican mother, his first poetry collection, Up Jump the Boogie, was a finalist for both the Kate Tufts Discovery Award and the PEN Open Book Award, and was named by The Huffington Post as one of “Ten Recent Books of Poetry You Should Read Right Now.”

Full disclosure: John Murillo is my husband. That does not stop me, however, from weighing into his poems—ask him yourself.  Before ever meeting him, I knew his poems and, as a poet myself, envied his work for its beauty and relatability. I once read that the best poems are the ones in which the author and reader can come to some mutual agreement. Though that might be true, I would go so far as to argue that the best poems are those with which the reader can identify. Murillo isn’t a poet who hides behind words or conceit. Rather, he is a poet’s poet, one who reveals much of himself and, in so doing, reveals much of his readers.

It was after the Rodney King verdicts were announced in April of 1992. I remember feeling simultaneously pleased and disappointed with myself that my first response was to want to write something. Not to burn, or blow up, or smash. But to write. Years later, I would come across a rap lyric that proclaimed “writing is fighting, and singing is swinging,” but I didn’t then—nor do I now, completely—buy it. But, yes, that was the moment. I realized that, for whatever good it did, this is how I would engage the world.

Whose work would you like to steal without attribution or consequence?

While in Johannesburg this past September, I heard the novelist Aminatta Forna read a breathtaking essay written to honor the South African writer Nadine Gordimer. It was at once an homage to an important writer and a solid defense of the study of literature, the life of the mind. If she hasn’t published it yet, I’d love to claim it as my own before she does.

Anywhere with a desk, chair, and a door that locks. Better still if there’s poor phone reception and no Internet connection.

No obsessions, and therefore no influences. Which is to say, I am an absolute original. Jokes. No, my only true obsession, I think, is the work itself. I’d like to say something less boring, but there it is.

To write well. To ignore all the other bullshit now associated with the writer’s life—the conference schmooze, the twitter feeds and Facebook posts, all the talk between poets that has nothing at all to do with poetry but rather who’s winning what and where—to knock all that shit off and just write. Well.

I believe literature has the potential to make us more human. Poetry, drama, literary fiction, creative nonfiction—when done right—can show us exactly who we are and who we still might become. For better or worse. So, yes, I do believe we have a collective purpose. Not necessarily as individuals, or in our individual works, but as a whole, I think we’re here to help us—humanity—do and be better.

I’d send a copy of the yellow pages from any major American city… along with two huge goons who would take turns beating the hell out of said leader with said yellow pages until he released said writers.

What is the line between observation and surveillance?

Observing is what we do, surveillance is what They do.

On March 15, 2016 at 6:30pm at Cave Canem’s Brooklyn loft, John Murillo will present his lecture, “Duende: Art That Possesses,” examining Federico García Lorca’s notion of a life and death struggle with a mysterious force he can only name as duende. Visit Cave Canem’s full calendar here.

Guest editor Nicole Sealey is the Programs Director at Cave Canem Foundation and the author of The Animal After Whom Other Animals Are Named, winner of the 2015 Drinking Gourd Chapbook Poetry Prize, forthcoming from Northwestern University Press. Her honors include an Elizabeth George Foundation Grant, the Stanley Kunitz Memorial Prize from The American Poetry Review, a Daniel Varoujan Award, and the Poetry International Prize. Her work has appeared in Best New Poets, Copper Nickel, Ploughshares, Third Coast, and elsewhere. Nicole holds an MLA in Africana Studies from the University of South Florida and an MFA in creative writing from New York University. Nicole will be interviewing a distinguished and diverse group of Cave Canem fellows and friends for The PEN Ten.