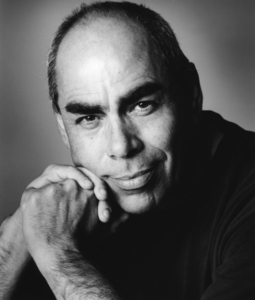 The PEN Ten is PEN America’s biweekly interview series curated by Lauren Cerand. This week Lauren talks to award winning poet Jimmy Santiago Baca, internationally known for his lyrical, politically-charged verse.Of Apache and Chicano ancestry, Baca was convicted on drug charges at the age of twenty-one and spent six and a half years in prison, where he found his voice as a poet through correspondence with Denise Levertov. Baca wrote about this transformative experience in his essay, “Coming into Language,” featured in PEN American Center’s Prize Anthology “Doing Time: 25 Years of Prison Writing.” About writing in Prison, Baca wrote “writing has enabled me to rise from a victim of a barbarous colonization to a man in control of his life. All of us who went to prison were lied to, and poetry is the only thing that didn’t lie…Writing was the only thing that could relieve the pain of betrayal, the only thing that filled the void of abandonment.”

Among his many celebrated works are Black Mesa Poems (1995), A Place to Stand (2001), and the screenplay for the film Blood In, Blood Out (1993). More recently, The Face, The Lucia Poems, and The Esai Poems have been published by Restless Books.

When did being a writer begin to inform your sense of identity?
I’d say with my first book, Immigrants in Our Own Land, back in `78.

Whose work would you like to steal without attribution or consequences?
Shakespeare.

Where is your favorite place to write?
Favorite place would have to be my cabin snuggled in the wilderness away from all city distractions.

Have you ever been arrested? Care to discuss?
Yep, got into a drug-deal-gone-bad shoot-out with DEA and pulled 5 years in Maximum Security prison.

Obsessions are influences—what are yours?
Mine used to be drugs, partying, womanizing, but that’s all changed—now its daily existence, family, reading, etc.

What’s the most daring thing you’ve ever put into words?
My newest book, Singing at the Gates.

What is the responsibility of the writer?
To toss out like old rotten salad the yearning for fame and money and get busy fighting for human rights and protesting abuses against the dignity of all human beings.

While the notion of the public intellectual has fallen out of fashion, do you believe writers have a collective purpose?
Yes, writers/poets have collective purpose, on many fronts, starting with freedom to express oneself.

What book would you send to the leader of a government that imprisons writers?
That’s easy: A Place to Stand.

Where is the line between observation and surveillance?
The line should be always marked so the rights of the human being are foremost and inviolable.