The PEN Ten with Janet Peery 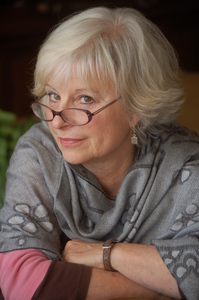 The PEN Ten is PEN America’s weekly interview series. This week, guest editor Natalie Diaz speaks with Janet Peery, a writer of short stories and novels. The author of Alligator Dance, The River Beyond the World, What the Thunder Said, and the forthcoming Across the Sky in Stars, she is also the recipient of the Rosenthal Award from the American Academy of Arts and Letters, the Whiting Writers Award, Guggenheim and NEA Fellowships, and was a finalist for the National Book Award. She lives in Virginia.

Janet Peery was one of my first writing teachers at Old Dominion. I had her as an instructor in my undergraduate classes, while I was still a basketball player, before I knew what writing was. That year I had a black eye (an elbow in practice severed an artery in my face) for an entire season and hers was the one class in which I didn’t use it as an excuse to be absent. It wasn’t necessarily the stories we were reading in class that I didn’t want to miss, it was her stories. She is a story-teller like the ones I grew up with—she knows how to make you laugh while she is breaking your heart. She is full with mischief and compassion and an imagination unrivaled even on my reservation. She understands the places I have come from because she comes from those places too. Her stories are like my old friends—I find myself returning to them when I’m in doubt about the art I make or about the artist I am trying to become. It is fair to say that I probably wouldn’t have been a writer if I hadn’t found Janet—if she hadn’t found me. I am so glad to introduce you to my friend and hermana, Janet Peery.

Where is your favorite place to write?
A brown chair by the fireplace in winter and a desk by an east window in summer.

Have you ever been arrested? Care to discuss?
No arrests, but only because I was young and fleet-footed.  It was a crime of opportunity.  In Denver in 1969, with no jobs, no money except for the couple of quarters we’d saved to buy candy bars for the next day’s meal, a pal and I happened to be walking down the sidewalk in Capitol Hill when we smelled a divine aroma: pizza, a large Supreme, judging by the smell. This pizza, we soon learned, was being carried by a ten-year-old kid. A grab and run operation and the pizza was ours. I’ve always been sorry.

What is the responsibility of the writer?
To be clear, to work at saying well a difficult and contradictory thing, and most of all to avoid the easy platitudes about the writer’s role that cheapen our endeavors and limit us.

While the notion of the public intellectual has fallen out of fashion, do you believe writers have a collective purpose?
Well, of course I do, though I would caution us to refrain from spending too much time in articulating this collective purpose for fear of leaching the blood out of the “uncontrollable mystery on the bestial floor,” and most especially for fear of the great killer of art that is smugness.

The body is political, especially for women and people of color. Sound and language begin as energy in the body. How do you inhabit or understand your body when you read and/or write?
This answer will probably disappoint. When I’m writing and things are going well—meaning I’m not gnawing on a pencil eraser or gazing out the window—when I’m so immersed in the work that I forget all else, I especially forget my body. I forget that I possess one. That I possess hair, ears, eyes, feet. This phenomenon is not only a great mercy that allows for a kind of sacred forgetting that allows deeper memory to enter, but each time the state of being comes upon me (for it can’t be courted) I realize that while I was in the state I couldn’t have known it for what it was. I can only know it through its absence, and it’s a grief every time it departs. Each time I come out of the trance I’m shocked to find this wild white hair growing from the top of my head, shocked that my ears have picked up the NPR station that’s been playing in the background, surprised to shift my gaze toward an object I was oblivious to only seconds before. And so this seems to me as apolitical as a phenomenon can get. This way of becoming invisible and almost insensate while the gray matter takes over. Though I know better, it is as if the locus of creation is in the mind alone and I am as unaware of my own mind as I am of gender or age or eye color or the fact that I have a mouth and that I’m suddenly ravenous.

We all have a language and system of images that are our own, that were built into our lexicons from the fragments and musics of places and people we come from. What is a word or image that haunts your writing or that you find yourself revisiting, and what does it mean to you, what or where of your life is it made of?
Childhood wandering on my grandparents’ farm—rolling prairie land, nameless grasses, poppy mallow, a shallow, brown river with rippled sandbars, mine the first footprints of the morning, catalpa, chickens, horses, a hay mow, the smell of ensilage, dent corn, milo, maize, the fear of rattlesnakes, wild dogs, coyotes, a certain Hereford bull, a tramp who tented in a certain part of the timber. If I thought about it, I’d have to say it haunts me because the landscape was so wide and seemingly infinite and beautiful and yet there were very real dangers.

What book would you send to the leader of a government that imprisons writers?
The usual suspects: Animal Farm, Brave New World, Fahrenheit 451. But in the likely chance that irony is in short supply, I’d tuck into the book box to be sent a novel or book of poetry so surpassingly enchanting—no agenda, no buried message, no idea-driven didactic purpose, just a damned good story or a beautiful poem, gorgeous and seductive and moving in itself, so that the leader might read it one evening and fall in love with the mind on the page and maybe begin to think twice. I realize this fantasy is naïve—after all it’s for their very seductiveness that books are banned by totalitarian regimes—and that it could be said that I’m arguing in a way for “state-sanctioned” literature, but this isn’t what I mean. I’m talking, I suppose, about putting beauty to purpose by sending books that would be, in Kafka’s phrase, “the axe for the frozen sea inside us,” but instead of “biting and stinging,” would murmur, whisper, sing.

Where is the line between observation and surveillance?
I’m not persuaded there’s a difference, or if there is, I think it’s largely semantic and subjective, a difference of degree. There isn’t a codified set of distinctions or ethics between the two verbs, which leaves me wondering where one activity leaves off and the other begins. Although “surveillance” sounds more sinister than the more benign “observation,” both, depending on the intention behind them and the purpose to which their results are put, might yield similar information and lead to similar consequences. It doesn’t matter from the prison cell, I guess I’m saying, whether the prisoner was observed or surveilled.

Guest editor Natalie Diaz was born in the Fort Mojave Indian Village in Needles, California. She is Mojave and an enrolled member of the Gila River Indian community. She is the author of the poetry collection When My Brother Was an Aztec. Her honors and awards include the Lannan Literary Fellowship, a Native Arts Council Foundation Fellowship, a USArtists Ford Fellowship, and a Princeton Hodder fellowship. Diaz splits her time between Princeton and Mohave Valley, Arizona, where she works to document and revitalize the Mojave language. For the PEN Ten, she’ll be interviewing writers whose work is a war-cry and who are also fierce supporters and champions of women writers and writers of color.