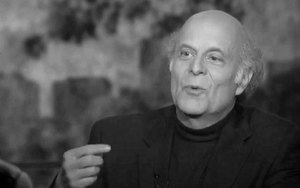 The PEN Ten is PEN America’s biweekly interview series curated by Lauren Cerand. This week Lauren talks with Harvey J. Kaye, the Ben & Joyce Rosenberg Professor of Democracy and Justice Studies at the University of Wisconsin-Green Bay and the author of “Why Do Ruling Classes Fear History?” and Other Questions; Thomas Paine and the Promise of America; and the just-published The Fight for the Four Freedoms: What Made FDR and the Greatest Generation Truly Great.

Honestly, it never really did until someone at PEN invited me to join the organization about eight years ago. Writers were not only people who wrote for a living, I thought. They also did it far more skillfully or creatively than what I imagined myself doing when I put pen to paper or finger to keyboard (even now I type with one finger). I figured I was a teacher, a professor, expressing myself through other means when I wrote. Even now, I only seriously think of myself as a writer when people ask me about it. I hope that’s not false modesty—or that I worship the craft too much.

Whose work would you steal without attribution or consequence?

My lifelong hero—ever since I was a boy—is Thomas Paine, the American Revolutionary and radical-democratic pamphleteer. I would love to be identified with his words, words such as “The sun never shined on a cause of greater worth” and “We have it in our power to begin the world over again.” But I really couldn’t steal them. Not simply because of scholarly and intellectual norms, but all the more because I am committed to redeeming the past that conservatives are so eager to suppress or manipulate.

I must add, however, that in the course of writing The Fight for the Four Freedoms I also became enamored of the works of the great radio playwright and producer Norman Corwin. Corwin had an extraordinary intellect and a poet’s sensibility. Just read the published scripts or listen to the recordings available online of We Hold These Truths, his December 1941 Bill-of-Rights Day play, and On a Note of Triumph, his May 1944 VE-Day play. The opening lines of the latter are magnificent and moving:

So they’ve given up.
They’re finally done in, and the rat is dead in an alley back of the
Wilhelmstrasse.
Take a bow, G.I.,
Take a bow, little guy.
The superman of tomorrow lies at the feet of you common men of this
afternoon.
This is It kid, this is The Day, all the way from Newburyport to Vladivostok.
You had what it took and you gave it, and each of you has a hunk of
rainbow
‘round your helmet.
Seems like free men have done it again

We have a very small house and our upstairs loft serves as both our bedroom and my “study.” I work at an old school desk at the south end. To my right is a window. To my left sit a few bookshelves. And in front of me, above my laptop, I tack pictures, quotes, and notes. That is my favorite place in reality. But in my dreams it is an equally small corner in New York City.

Have you ever been arrested?

No. But I have taught at a maximum-security prison a couple of times … And while I really enjoyed the students there, I would never want to join them behind bars.

Obsessions and influences—what are yours?

Obsessions? Well, I really do try to follow the German-Jewish writer Walter Benjamin’s directives in The Writer’s Technique in Thirteen Theses. For example, “A pedantic adherence to certain papers, pens, inks is beneficial” sounds good to me. And who would deny his proposition that “Speech conquers thought, but writing commands it.”

Influences? Lifelong: Thomas Paine. As an adult: The British Marxist historians, especially E.P. Thompson and George Rudé, for their recovery of the struggles of working people. And most recently: American essayist Max Lerner, by way of his progressive and radical-democratic writings of the 1930s and 1940s. I really do believe, as he wrote, that “The basic story in the American past, the only story ultimately worth the telling, is the story of the struggle between the creative and the frustrating elements in the democratic adventure” (It Is Later than You Think: The Need for a Militant Democracy, 1939). And in that vein, I love what FDR said: “We are characters in this living book of democracy. But we are also the authors.”

To explain why conservatives had despised Paine as much as they did for the past 200 years, I declared at the outset of Thomas Paine and the Promise of America: “Paine had turned Americans into radicals—and we have remained radicals at heart ever since.” Not exactly daring, I admit; but, as much I believed it, I had to be encouraged by a friend to actually state it. And ever since, I have felt all the braver in saying such things about my fellow citizens.

As the late C. Wright Mills put it: To speak truth both to power and to one’s fellow citizens—so as to challenge the former and engage and empower the latter. Along with that, the writer must also speak the truth to him or herself and make every effort to recognize when he or she is wrong.

I have read that some early modern scholars argued that Machiavelli’s The Prince was really written not for princes but for the common people—to reveal and subvert the workings of the former. Think about that … Anyhow, I would send to such a despot a copy of the Corwin play On a Note of Triumph (cited and quoted above) to let him know that we will be coming for him.

I have always thought of observation as a playful activity motivated by curiosity, fascination, attraction … and surveillance as a threatening pursuit motivated by a desire to control, suppress, do in … They are divided by far more than a mere line.