The PEN Ten with Guillermo Gómez-Peña 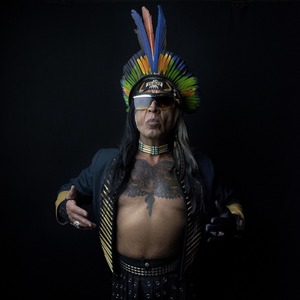 His work has been featured at over seven hundred venues around the world, and includes seminal performance art, video, audio, installations, poetry, journalism, and cultural theory. The first Chicano/Mexicano artist to receive a MacArthur Fellowship, his ten books include collections of essays, experimental poetry, and performance scripts.

Guillermo Gómez-Peña will be participating in five events at the PEN World Voices Festival of International Literature: Opening Night: The Drug Edition on April 25, Reckoning Mexico on April 26, Inside Out: Modern Chicano/a Culture on April 27, Mexican Poetics: A Lecture-Performance on April 28, and ¡Cabaret Mexicano! on April 30.

I was raised by a bohemian family in Mexico City, and when I was a teenager I realized I wanted to chronicle my life in words and live performance images. Since then, I’ve been both a writer and a performance artist, and the two practices have been an integral part of my identity. Languaging and embodying ideas are complementary creative processes for me. When I began crossing the border, performance and literature helped me recapture the agency and citizenship that both of my countries (Mexico and the United States) had previously denied me.

I would love to rewrite one of Octavio Paz’s epic poems as a Spanglish robo-punk spoken word performance, and remake Alejandro Jodorowsky’s The Holy Mountain somewhere on the U.S.-Mexico border. I dream about these things, but I really don’t have time for them. I have enough projects of my own on the table to keep my hair on fire for the rest of my life.

Since 9/11, as my meta-horizons began to fade, I became obsessed with hope, with finding its spiritual source and location. Is hope a deep feeling of expansion located in the chest, the abdomen, or the sphincter? Is it a distant marker on the horizon that directs our actions, or a mysterious spiritual energy that propels you into the unknown against the laws of gravity? Is hope a matter of quantum theory? A form of poetic will? Is hope by definition illogical and unreasonable? Can hope be nurtured through art and education? Does hope put you at odds with the state?

As a performance artist, I am obsessed with questioning the limits of my body and the borders of my audience’s tolerance. As a writer, I am obsessed with hybrid languages and genres. I think of the human body as text and of literature as ritual action.

As a writer, I am also obsessed with inventing my own personal “Robo-Esperanto,” a bizarre combo of Spanish, English, Franglais, Portuñol, Latin, techno-speak, glitch poetry, and various indigenous languages. This self-styled poetic language helps me revisit my journey from South to North, and from the deep past to the immediate future. People call this aspect of my work “Chicano sci-fi.” I just think it is a slightly more experimental form of Papiamento or Tagalog.

Other more personal obsessions? The combination of kinky sex and costumes, good Scotch, losing myself on stage, developing new performance personas, and testing the limits of my health and mind on the road. I’ve been on the road, traveling from city to city and from country to country, for three decades. I am a migrant performance artist and writer, and I adore this aspect of my life.

Perhaps my “Open Letter to a Mexican Crime Cartel Boss.” Some people felt implicated, and I received several death threats and warnings to “cool it.” I have also done many “daring” things as a performance artist. Once I walked from Tijuana to Los Angeles to better understand immigration. Another time I crucified myself dressed as a mariachi to protest immigration policy. After the invasion of Iraq, I began to practice acupuncture on nude bodies using needles bearing the flags of the countries belonging to the much-touted “coalition of the willing.” Then I invited audience members, one at a time, to remove the flags as a way of committing to peace. I’ve done so many locuras, and I did these actions precisely because I couldn’t put them into words.

We should always try to fight censorship, any form of censorship: governmental, religious, corporate, media, academic. I am more worried about self-censorship. It’s much more insidious and harder to fight. When writers and artists decide not to tackle certain issues because doing it might affect their job, status, or finances, it becomes a real issue.

I can only speak for myself: It is my responsibility to keep imagination alive; to reclaim the power that imagination has to transform so-called “reality.” ImagiNation—that’s my nation, that’s where I wish to live and die. Why? Because, when you don’t have access to real power, poetry replaces science, and performance art becomes politics.

While the notion of the public intellectual has fallen out of fashion, do you believe writers and artists have a collective purpose?

I’d say to the reader, choose one of the following options:

a) Talking back to power,

b) Chronicling the dark corners of the human condition,

c) Wrestling with their inner demons,

f) Taking the temperature of democracy.

Art is constantly testing the limits and possibilities of democracy. In the name of art, people have crucified themselves as a form of protest, created fake corporations to denounce environmental injustice, and printed useless money and conceptual passports to invent their own countries. In the name of art and literature, people invent mysterious languages, religions, communities, and architectures that are more congruent with our needs and aspirations.

Artists and writers have envisioned parallel universes in which our contemporaries can engage in meaningful forms of freedom and creativity. In this sense, true democracy can only exist in the imagination of art and literature.

Keeping “freedom” and “creativity” alive in a time when these words have been usurped by high-tech corporations and pop advertisement is a very, very important collective purpose.

Have you ever been arrested—care to discuss?

Being a Mexican in the U.S. is already an act of defiance, and in some cases a felony. I have been arrested merely for “being” and “looking Mexican.” Once, I was arrested in San Diego for kidnapping my own son. Another time I was arrested at LAX by Homeland Security for bringing back to the U.S. many weird (and unexplainable) props at the end of a tour. It never ends.

Last year my wife Balitronica and I were “arrested,” or rather, kidnapped, by a gang of corrupt policemen in Mexico City, who took us on an all-night ride for “looking suspicious.” They took us from teller to teller until they couldn’t get any more money out of us, and dropped us penniless and lost at 4 in the morning in Tepito, one of the most dangerous neighborhoods in Mexico. They claimed that they picked us up because we “looked too weird,” a euphemism for “complex” or “eccentric,” but I wouldn’t be surprised if they were targeting me for my anti-government activities and wanted to give us a good scare.

As a nomadic performance artist, I tend to write on the road. I write on airplanes, rooftops, in bars, parks, wherever I am. I first write in my diary, sometimes even on napkins. Then, when I have time back home, I use my computer as an editing machine and as a techno-toy to play around with the myriad structural possibilities of the text.

The Memory of Fire trilogy by Eduardo Galeano.

We observe at ground level; they survey us from above. Did I understand your question correctly?

How does identity interact with or inform your work?

At the risk of sounding like I suffer from a multiple-personality disorder, I can say that at different times and in different cultural contexts, I am/can be many Mexicans, post-Mexicans, Chicanos, and neo-Chicanos, or simply Latin Americans. I am also an international citizen in the Vonnegutian sense. My gender identity is also constantly fluctuating somewhere between extreme female and male.

I am not “performing” different roles or identities. Each of my multiple and ever-changing identities is equally “real” and “authentic.” In this sense my many performance personas and literary voices reflect and reveal my multiple repertoires of identities. I can’t help it.

Is there a connection between art and politics?

I finally get it. Donald Trump is actually a hard-core performance artist impersonating a cartoon of the worst stereotypes that progressives have about the far right: a boisterous, misogynistic, racist, provincial cartoon of a 1950s “ugly American.” It’s a brilliant durational performance. If he wins, he will manage to create dissent in all directions.