The PEN Ten with Dunya Mikhail 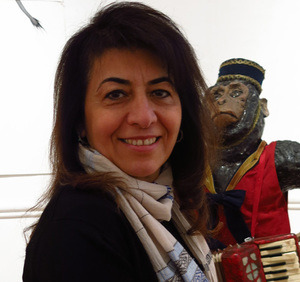 Born in Baghdad, Iraq, Mikhail came to the United States in the mid-1990s. She is the author of The Iraqi Nights, Diary of A Wave Outside the Sea, and The War Works Hard. Her honors include a Kresge fellowship (2013), the Arab American Book Award (2010), and the UN Human Rights Award (2001). She was shortlisted for the Griffin Poetry Prize in 2006. She currently teaches Arabic at Oakland University in Michigan.

When did being a writer begin to inform your sense of identity?
During my teenage years in Baghdad, I wrote poems as gifts for my friends’ birthdays. They called me “the poet.” At home, my mother used to mention to our guests that I was busy writing “feelings” as an excuse for me being in my room and not with them. She called the poems “feelings” because in Arabic the two words are close; we call poetry “shi’r” and feeling “shi’ur” and she made her own plural of both words. But my identity as a writer can be traced to a particular time: September 1980. That month, the Iraq–Iran War was announced. All men who could bear arms were called to the battlefield (jabha). “Are they taking women too?” I asked. No, I learned. The reason I asked with concern was that I really wanted to continue my poetry discoveries and be left alone with my writing and not be taken away.

What’s the most daring thing you’ve ever put into words?
When my book Diary of A Wave Outside the Sea was published in Iraq in 1995, my friend, the fiction writer Lutfiya al-Dulaimi, said it was daring, especially because I had kept a passage the censor recommended should be erased. Well, I was excited rather than daring. But then an official from the ministry came to my office (at the Baghdad Observer daily) to “interview” me. He was interrogating me rather than conversing with me. Things escalated in a report, which pushed me into what they call “exile.” I don’t really, by the way, have that sense of exile in a traditional way, maybe because I am actually a bird.

Whose work would you like to steal without attribution or consequences?
I would like to steal from folktales and mythologies. I did that when I was six or seven years old but didn’t think of it as stealing. My grandmother used to tell me those as bed-time stories but she didn’t have a book to show me the pictures. So I used to write those tales my own way in my notebook and draw simple illustrations.

Obsessions are influences—what are yours?
I am obsessed with words to the point where I say the same thing over and over again. But the particular words I am obsessed with are not really words. They are those ancient Sumerian symbols and images inscribed on clay tablets. They were the first recorded communication in history but they were the metaphors of things and not the things themselves. They were poetical by default, but they gradually lost their poetical features, simply when they developed into modern languages.

When, if ever, is censorship acceptable?
Well, censorship was the main reason I left my country. We had an actual building called The Department of Censorship. The job duties of the employees included looking out for what was “acceptable” or “unacceptable” for people to write and to read. Some of my writing was found “subversive” and “unacceptable.” The Minister of Information and Culture called us once to a meeting with him. I was one of 12 young poets waiting to see what he had called us to meet for. After offering us tea (in glass istikans), the minister said, “This modern poetry you are writing does not serve our national interests,” and “Why do you write about the turtle when you mean the war?” We were all silent and listening. Then he added, “Writing the prose-poem is like marrying a foreign woman.” My friend Abdul Razzaq al-Rubaie, who was sitting next to me, wrote on my notepaper, “This makes me marry a foreign woman.” Well, you can imagine all of the jokes and laughter we had after that meeting—outside the ministry building, of course. When I came to America, I found that censorship had no home on the ground, but it was somehow in the air, implicit. Speech here is usually restricted to what is “acceptable.” In other words, censorship precedes speech here in America, as opposed to in Iraq, where censorship follows speech. You wonder when censorship is acceptable, yet censorship wonders when speech is acceptable.

What is the responsibility of the writer?
The first poet in history, Enheduana, had a title, and that was “the flame keeper.” I think that’s a good responsibility for any writer, if we think of the flame as being both aesthetic and moral.

While the notion of the public intellectual has fallen out of fashion, do you believe writers have a collective purpose?
The middle name of creativity is individuality, but when the creative work is published, it expands into the meanings added by the active readings of others. A deep process occurs silently but powerfully within the listener or the reader, a process of transformation into adopting a common truth.

What book would you send to the leader of a government that imprisons writers?
I doubt that such a government reads. I am not going to waste a book on it.

Where is the line between observation and surveillance?
The way we consider the object: just physical (surveillance) or meta-plus-physical (observation).