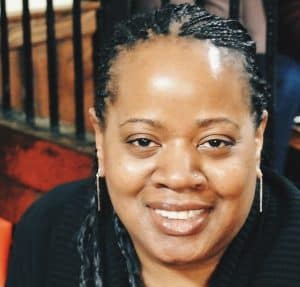 The PEN Ten is PEN America’s weekly interview series. This week, in celebration of Banned Books Week 2017, we’re publishing a series of interviews with writers whose books have been challenged or banned. Today we feature an interview with Coe Booth, author of the YA novel Tyrell.

When did being a writer begin to inform your sense of identity?
I was one of those second graders who was always “working on my novel!” But I really started to think of myself as a writer in seventh grade. That was when I realized I was never going to be one of the popular kids, so I embraced my identity as a writer. And that was when I really started sharing my work with my classmates. By high school, I was writing all the time. Of course, that was mostly during class!

Your book Tyrell, about a young African-American teen living in a homeless shelter with his mother and brother, was challenged by parents from Chesterfield County after it appeared on public school summer reading lists. What was your initial reaction to the news that it had been challenged?
I really didn’t know about the challenge for a long time, but when I found out, my first thought was, “Really? They don’t think high school students can handle a book that was written for them? What do they think will happen if they read it?” It always surprises me when parents or school boards think teens aren’t ready to read about things they’re actually experiencing in real life.

What book(s) do you wish you had access to as a child, but didn’t?
Like a lot of kids, I wanted to read books about people like me and my family. I grew up in the Bronx, and I wanted to read about contemporary black kids who lived in the city. I wanted to see those kids go through the challenges of growing up, deal with problems at home and school, start dating, etc. But those books didn’t exist, so I started writing those stories. Yes, I secretly wanted to be the black Judy Blume!

What is the responsibility of the writer? Of the writer of YA books?
I think our responsibility is to tell the truth. We’re writing for discriminating readers who don’t want to read stories that water down their experiences or belittle the intensity of their feelings. Being a teen is complicated and difficult, and it’s the job of the YA writer to reflect that as completely as possible.

What’s your favorite banned book?
Oh, that’s a hard question. I have so many! The Absolutely True Diary of a Part-Time Indian is one of my favorites. I love how Sherman Alexie captures all of Junior’s teenage insecurities, and how the book has so much humor and so much heartbreak, all at the same time.

What book would you send to an individual or institution that bans or challenges diverse books?
Is there a way I could send them their own teenage diaries, just so they could honestly remember what it was like?

Speaking of censorship—when, if ever, is censorship acceptable?
Censorship is about fear and control; it is never acceptable.