The PEN Ten with Cinelle Barnes 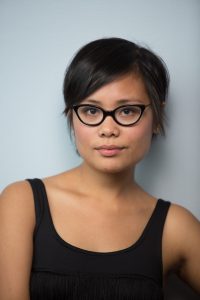 The PEN Ten is PEN America’s weekly interview series. This week Hafizah Geter, PEN Ten guest editor and editor at Little A from Amazon Publishing, speaks to Cinelle Barnes, author of the memoir Monsoon Mansion that was released earlier this month. Cinelle will also be participating in this year’s International Literary Festival on Saturday July 21, 2018, at the New York Times Conference Center.

I think that while identity is in constant flux for the writer and the immigrant, some explorations that keep reappearing in my work are motherhood and daughterhood, the journey of the island woman in diaspora, survival, and manifestations of memory, both concrete and abstract.

As I write in Monsoon Mansion, my childhood was a world built on alternative facts and fake news—political and personal, some dating back to my parents’ marriage, some as far back as Spanish colonization. The characters that peopled my early life were very good at being phonies, fabricators, wooers, but they never won my trust. I repeatedly write in my book, “Children are very intuitive” and “Be brave and be kind.” To answer the first half of the question, I navigate work and life in this era hopefully with the same kind of intuition, courage, and kindness that kept me alive when some evil giants were trying to take charge and ruin it all for the rest of us.

And as for the relationship between truth and nonfiction—all I have to say is that we need more personal accounts from the side of the oppressed and marginalized. We all already know that it is important to use literary techniques in creative nonfiction for the sole purpose of delivering facts, but I think as a collective, we have to be better about admitting our faults when it comes to the type and amount of space we give to those who are the most vulnerable and under threat. I would love to hear and read more from migrant workers, senior citizen immigrants, the wrongly convicted, the sick and handicapped, native peoples. We should provide translators for those who have much to say but can’t say it in English.

We give so much air space to the other side—and this is how they subtly shape our imagination.

The idea of Amish friendship bread comes to mind. A starter made of flour, sugar, milk, water, and yeast is passed from baker to baker. Each baker takes a small portion of the starter to bake a new loaf, then passes it on to a friend or family member, and they bake and pass, and so on. The key idea here is that each person creates a new loaf—each baker is different, each kitchen, oven, execution, presentation, down to the way the bread is sliced and served, is different. The loaves are not a copy of each other, whereas cookies cut with the same cookie cutter would be, and the mixture only serves as a starter, not as an end product. And the point, in the end, is that everyone who participates adds to the sense of community, and nobody bakes to get ahead and nobody bakes only to be shortchanged.

And for my new work, I am documenting my having been undocumented in America in a series of essays. I love the paradox there, and even find it a tad humorous. And sometimes, I think, laughing is a form of resistance. There’s nothing more annoying for an oppressor than to see the oppressed thriving in the midst of struggle. Joy is resistance, and so is hope.

I’m not sure if it is the biggest threat, but it is a threat—clout or noise. Distractions are being pumped into our collective consciousness daily.

Personally, my right to free expression, my right to tell my truth, was challenged when a family member told me that I should write about something else—that I should abandon the idea of writing our family story, that it was not mine to tell. I told this person that the stories shaped me, whether I was a participant or a witness, and that I was going to write my memoir, and if they wanted, they could, too.

My first instinct is to say that writing my family’s history, which is also my country’s history, is the most daring thing I’ve written. But when I really think about it, every new work is the most daring thing. Having to write another truth, and another, and another, becoming a better writer, learning, taking deeper breaths and deeper dives, working with more efficiency and clarity, overcoming insecurity and not believing the lies—these are all courageous things.

Straight out of college, I wrote an experiential travel essay for a travel blog. It was about my coming out of a Catholic upbringing and visiting a mosque for the first time. I wish I gave the story more context, more research, more time. I now think of how my perspective was shallow and incomplete, how I didn’t visit the mosque more than once, and how I italicized Arabic and Tagalog words and ended up othering non-Western languages. I was so young, and as some from my writing workshop would say, my mind was yet to be decolonized.

I love to connect with readers and other writers on Instagram. I post anything from book tour photos to photos of my dog, my child, and the laundry that I constantly ignore so I can write and get through my #TBR pile. I also post pictures of Filipinx food, cultural events, people singing karaoke, and tag them with #pinoypower or #pinoyauthor or #pinoypride. It’s a way for me to find, or be found by, a Filipinx audience that might not naturally be inclined to engage, or feel included, in other outlets—newspapers, journals, magazines, television, etc. There’s such pride when Filipinxs find their own online. There’s also such joy when I can connect and cross-pollinate with other Pinoy artists, e.g. Ruby Ibarra, Elaine Castillo, Monica Ramos. Instagram is also an easy way for new readers to see where I am now. Monsoon Mansion ends with a snippet of the present, and readers are always happy to know that I now have a beautiful life. Instagram allows readers to see the #IRL of authoring, mothering, and marriage, like a would-be epilogue in visual form.

9. Can you tell us about a piece of writing that has influenced you that readers might not know about?

Reading parts of Noli Me Tángere by José Rizal, the Philippines’ national hero, was instrumental in elementary and high school. My first activist feelings and thoughts came when I read his fiction—stories about Spanish friars raping women, colonists regulating commerce, unfair labor and farming laws, the one percent controlling the rest of the population. Another work that influenced me as a young writer was Jessica Hagedorn’s Dogeaters. Not only was she a Filipino author, she was also a woman brought up in the same city, same class, same social circles as me. Seeing stories that looked like my life made me believe that I could be a writer.

10. If you could require the current administration to read any book, what would it be?

I think there’s danger in requiring them to read just one book. I think the point is to make sure they have a varied selection, assigned by just as varied a cohort, so that they can learn from books that are representative of the people they are elected to serve. I also suggest this because it’s important for these folks to remember that we are not a monolith—we are pushed and pulled by many factors: age, race, class, economics, education, religion, sexuality, gender, etc. I would definitely engage the administration in conversation (and not just require them to read, but to think and to discuss) on more books written from the margins. I would have a book listed from every group Trump has attacked: immigrants, undocumented children, LGBTQ, Filipinx, Latinx, Haitians, Salvadorans, Mexicans, refugees, the disabled, Muslims, women, and sadly, many more. Recent releases that come to mind are The Map of Salt and Stars by Jennifer Zeynab Joukhadar, America Is Not the Heart by Elaine Castillo, and Heart Berries by Terese Marie Mailhot. I would also require them to create something out of their new knowledge—guide them through making art (a poem, an essay, a clay pot, a script, a choreography, a photo, anything), because I believe that the process of creating changes us. Also, several poetry books. Poems have the magic of infusing us with the human spirit. And for the most part, the human spirit is what this administration lacks.

The PEN Ten with Marwan Hisham