The PEN Ten with Burhan Sönmez 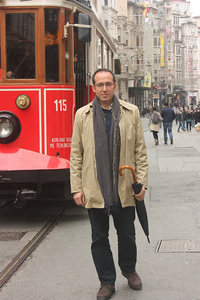 The PEN Ten is PEN America’s weekly interview series. This week, we speak to Burhan Sönmez. Born in Turkey, Sönmez worked as a laywer in Istanbul and was a founder of the social-activist culture organization TAKSAV (Foundation for Social Research, Culture and Art). After a 1996 incident with the Turkish police in which he was assaulted and badly hurt, Sönmez left for rehabilitation in Britain with help from the Freedom from Torture foundation, and he continued to live in political exile in Britain. He is the youngest recipient of the Sedat Simavi Literature Prize for his second novel, Sins and Innocents. A member of both English PEN and Turkish PEN, Sönmez’s latest novel, Istanbul, Istanbul, debuts this spring from OR Books.

Sönmez will be participating in the events Literary Quest: Westbeth Edition on April 28, and Ninety Minutes, Three Minds on April 29 at the PEN World Voices Festival.

By the time I decided to write a novel, I felt that it had already begun to form my sense of identity. Before becoming a writer, I was a human rights lawyer. Everything changed during this time in my life. Sudden physical problems, caused by an assault from the Turkish security forces, carried me to the brink of death. Luckily, I survived, but I was confined to a bed for months. The only thing I could do was watch TV and write notes about anything I could imagine. Some time later, I noticed that these notes were the branches of long, entangled stories. I realized that I must write, just write. Since then, I have believed in writing more than anything else and in the good things that can come out of bad incidents.

The work of Dostoyevsky and Marquez. Since they are no longer in this world, they cannot knock on my door in the middle of a dark night and tell me off for eating their bread. Or can they?

In the beginning, I dreamed of being a poet, believing that poetry is the most superior of all arts. But I happened to turn my hand to fiction and became a novelist. We may think we leave our obsessions behind, but our obsessions don’t leave us. Lately, I’ve noticed that I’ve been keeping my dream alive by putting poems in every novel I write.

Writing about certain delicate issues still seems daring. Once, I got involved with a written statement criticizing the military forces for murdering people and mutilating their bodies in Kurdish cities in Turkey. Apparently, the Court found our words so daring that it sentenced us to six months in prison. Luckily, it was a suspended sentence.

As people get more and more scared under conditions of poverty, war, emigration, and authoritarian regimes, I cannot think of any reason for accepting any kind of censorship. We don’t have to think of limiting our freedom. Instead, we need to find ways to cross the borderlines of restrictions and, when it happens, be ready to pay the price for it. Words are not up for negotiation. We have known that since the time of Socrates.

The writer’s only responsibility is to listen to his or her inner voice. He or she should not listen to any other voice except the voices of those who are in emotional or physical pain.

In a world of fragmentation and alienation, writers still wish to create an intact world of their own. It is an illusion and, of course, a promise. Writers write about illusions and promises by refusing and, paradoxically, reproducing them. As long as there is human suffering, there will always be a desire for collective purpose. Writers will have a common purpose, even if it takes on different forms depending on the time and place.

King Lear by Shakespeare would be a good choice. The leader might be able to learn what it is like to be disgraced and shed tears. Another option would be The Divine Comedy by Dante, but it is so long that such a leader wouldn’t finish it.