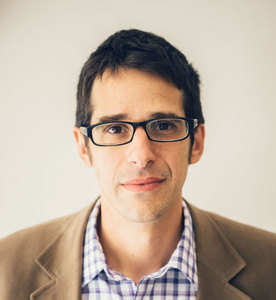 The PEN Ten is PEN America’s weekly interview series. This week, guest editor Alex Segura speaks with Ben H. Winters, the author of eight novels, including most recently World of Trouble (Quirk), the concluding book in The Last Policeman trilogy. World of Trouble was nominated for the Edgar Award from the Mystery Writers of America. Countdown City was an NPR Best Book of 2013 and the winner of the Philip K. Dick Award for Distinguished Science Fiction. The Last Policeman was the recipient of the 2012 Edgar Award, and it was also named one of the Best Books of 2012 by Amazon.com and Slate.

Ben H. Winters’ novels deftly merge paranoia, darkness, a heavy dollop of black comedy, and an all-too-real sense of dread to create stories that linger long past the moment you finish reading.

Most importantly, Winters does not allow his work to be tied down by genre—nor is his work easily categorized. His most recent novels, the trilogy that begins with The Last Policeman, showcase Winters at his most versatile and human—telling the tale of a former cop trying to solve a murder as society itself is ripped apart by an impending apocalyptic event.

His ability to make the surreal seem all-too-genuine and his deftness at creating complex and compelling characters that defy conventions make Winters the perfect choice to be spotlighted in The PEN Ten series.

I’d like to thank Ben for taking the time to speak with me. His novels The Last Policeman, Countdown City, and World of Trouble are available now.

I played in a punk rock band starting in middle school. My bass playing was pretty spotty, and my main contribution became lyric writing. I still love lyrics, and lyricists, and some of my favorite writers are Irving Berlin, Stephen Sondheim, Bob Dylan, Elvis Costello, Tom Waits…

There was something my grandmother said when she was dying, which was relayed to me by my father, and I later put it in a novel. I actually asked my dad if he thought it would be OK, and he said sure, but I felt sort of awed by the idea of taking that real and meaningful moment and turning it into fiction. It felt a little transgressive, but also magical, and powerful. I don’t believe in ghosts or the afterlife, but I do like the idea of her being present in my work in that way.

My house. A former owner had the attic refurbished as a rental apartment, and now it’s my office. So I’ve got a nice big desk up there—actually our old dining room table—and there’s a bathroom and a kitchenette. It’s far enough away from my kids, from the laundry machine, from all the small joys and responsibilities of life, that when I’m up there I can really just be up there.

I don’t have a lot of lasting, lifelong obsessions. I don’t get sports; I’m not religious; I love music but I’ve never felt the need to, I don’t know, drive around seeing Phish shows. I do get deeply focused on the subject matter I’m working on, but then I move on. I was writing The Last Policeman trilogy for four years, and I spent a lot of time immersing myself in asteroid science, and now people ask me questions and I’m like, “What? I have no idea. That’s not my thing anymore.”

To read a lot, and to talk about other writers, and recommend books that you love—books by living authors, who can earn their royalty if your recommendation is taken. And to be encouraging to other writers and would-be writers and give advice and support and feedback.

Except when you’re working on a book and you’re at that agonizing amazing stage where you really just need to write the thing. Then your responsibility is to the work, and it’s OK to be ruthless about your time.

I think there is a lot of pressure now to be a presence, a “brand” or whatever, to be out there tweeting and blogging about everything. That’s like our version of being a public intellectual, shoveling opinions like coal into this massive furnace of the Internet.

But I do think there’s an old and important tradition in civilization, of people who stand back a little from the day-to-day goings-on of the world, and process and reflect and create these abstractions, these stories. Fiction is built out of the day-to-day stuff of life, words and people and events, but it’s different and it’s meant to be different. So our collective purpose is to keep doing that, and taking the time to do it properly even as life drags us all along at a quicker and quicker pace.

Nope. I am deeply conflict averse, plus a real coward, so I’ve generally stayed away from illegal activity.

Something very very funny. Something timelessly funny. At Swim-Two-Birds? Catch-22? Tristram Shandy? A Confederacy of Dunces?

Because, look, honestly, we’re not going to change the policies of a despot through literature, but our best shot is to remind him how ultimately absurd everything is, how we’re all just people, bumbling around trying not to mess up. He’s not going to be reasoned into letting out the writers—anyone reasonable would not have locked them up in the first place. But if he’s laughing, if he’s in a good mood, he might just go, “Ah, fuck it” and open the bars.

It’s certain that the best mysteries have elements of social commentary, although the word “tool” makes me uncomfortable. A tool is purpose-built to do one thing, and a book that is built specifically to deliver some comment is destined to fail, both as a delivery system and as a book. I think the best novels (mystery or otherwise) don’t tell us what to think, though they may guide us toward something worth thinking about.

Guest editor Alex Segura is a novelist and comic book writer. He is the author of the Miami crime novel Silent City, the first in a series featuring Pete Fernandez. Silent City and its sequel, Down the Darkest Street, will be out via Polis Books in 2016. He has also written a number of comic books, including the best-selling and critically acclaimed Archie Meets KISS storyline, the “Occupy Riverdale” story and the upcoming Archie Meets Ramones. A Miami native living in New York with his wife, Segura will be interviewing a number of crime and genre-bending fiction authors for The PEN Ten.