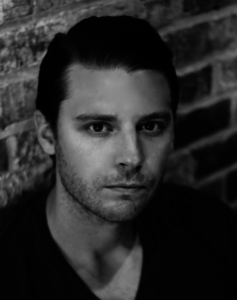 The PEN Ten is PEN America’s weekly interview series. This week, we speak with Andrew Malan Milward, the author of the story collections The Agriculture Hall of Fame and most recently, I Was a Revolutionary, which explores questions of history, race, and identity in Kansas from the Civil War to the present day. He lives in Hattiesburg, Mississippi, where he teaches at the University of Southern Mississippi’s Center for Writers and is editor-in-chief of Mississippi Review.

Probably about the time my sense of identity stopped being informed by being an athlete, which would have been about age 20. I’d gone to college to play basketball and left aspiring to be a writer.

So many folks, but how about W.G. Sebald and Marilynne Robinson for starters. The perfect marriage of eloquence and depth of thought in their work consistently astounds and inspires me, though the darker side of that is a kind of envy. But the more I think about it, I know stealing from another writer would make me feel horrible. It’s mighty tempting in a regrettable-late-night-food-decision-coming-home-from-the-bar kind of way. I’d crave it in the moment and then feel utterly ashamed in the morning.

When I was starting out, I felt like there were too many temptations at home (guitar, TV, my bed, etc.) so I used to like to write in cafes. However, I realized I wasn’t very productive there either because I was often people-watching or distracted by music and commotion. So I developed a stronger sense of discipline and now I like to write at home in my office. I have a beautiful desk that used to belong to the local high school here in Hattiesburg, Mississippi. It’s a huge table, perfect for spreading out my writing and research, full of carvings of middle fingers and phalli in various states of tumescence as well as graffiti that says things like Fuck Mike and I Heart Sally.

It sounds weird, but I’d have to say history, Kansas, and basketball seem to be my biggest obsessions. The first two go somewhat hand in hand. Central obsessions for me as a writer up until this point have been my interest in where I grew up, Kansas, and that has lead me to become interested in the history of that place. But I’m also pretty fascinated by the notion of place in general. Everywhere you go is pretty interesting if you look at it long enough. So yes, Kansas, but also the state where I live now: Mississippi. Hopefully Kansas is almost out of my system and I can begin to write about somewhere else soon. The third obsession, basketball, also has a lot to do with where I grew up since basketball is a form of religion in Kansas. I grew up around the game and played at a very high level for many years. Even though I gave it up some time ago I’m still obsessed by the game, especially my beloved University of Kansas Jayhawks. In fact, I’m writing a book about that obsession at the moment.

It certainly wouldn’t be from one of my books. Too safe. It would be the times in my life when I’ve had to tell people I love that I knowingly caused them serious pain and that I was sorry. Of course, saying this to people you don’t love or who are strangers also feels brave in a way, too. I suppose it’s sad that honesty and admission of guilt sometimes feels daring, and perhaps that says way more about me than I’d care to admit, but so it goes.

Boy, what a question… I think the responsibility of the writer is honesty, even when, like me, you’re writing fiction and making things up. That obligation to tell the truth as best we know it and as clearly as we see it is the “one commitment [a writer] can’t betray without destroying himself,” as E.L. Doctorow, a writing hero of mine, once said. That responsibility to honesty means you also have to have a certain amount of contrarianism and courage. Don DeLillo, another figurehead on my Mount Rushmore of writing, spoke to this point when he said that the writer must be someone in opposition. When necessary, the writer has to be willing to take a colder eye and write about hard, unflattering, and ugly things—the sorts of things we, especially in America, are not really encouraged to think about because we’re too busy being told how wonderful we are by those in power. You have to be willing to be the skunk at the garden party sometimes. You have to be willing to take a stand against people and entities—political leaders, governments, the wealthy and privileged, corporations—far more powerful than you feel as an individual.

I think writers have individual pursuits and purposes that mostly happen to be similar or constellationary, and thus do have a general, slightly amorphous collective purpose that the best I can tell seems to revolve around the notion of trying to capture some truth inherent in the density of human experience, something about what is hard, beautiful, devastating, hilarious, and complicated about being alive. It seems that whatever else we might think we’re up to, we’re all doing this at a base level and so I think we do have a collective purpose, even if we’re adamant that we don’t. That’s one of the interesting ironies of being a writer: It’s something you do in isolation and yet it’s something that connects to and unites, not only other writers but all people. I say that’s the irony of writing, but of course that’s really the magic of writing. The acts of writing and reading are profoundly humanizing and civilizing pursuits, I think. When honestly and earnestly engaged, they foster empathy, understanding, and an appreciation for complexity.

I’d probably send them Michelle Alexander’s The New Jim Crow along with a note that said, “You may think you’re totalitarian by locking up more writers, but we incarcerate our population, particularly people of color, on a level that would make Stalin proud.”

The line seems to be obscured and problematized by authority and power. Citizens observe one another, the events and people around them, and most of it is harmless, except for certain psychologically aberrant behavior of the stalker/pervert/voyeur variety. In fact many would say writers are observers or witnesses. But when power, whether economic power in the form of massive private corporations or power in the form of a theoretically public entity like the State, does the observing, it’s usually not innocuous and quickly becomes surveillance. Surveillance from private power is always driven by the needs of capitalism, which happen to be at great odds with the needs and well being of the population. Surveillance from the State is more complicated. We are told it’s done to keep us safe, which in part it is, but it’s also done to keep us in line, which is pretty despicable because it’s usually couched in the not-so-implied implied threat of: If you don’t let us infringe on your civil liberties and abuse our powers evil people will come and do not very nice things to you and your fellow citizens. The logic of it is that if I scare you enough, I know you’ll let me get away with anything.