The PEN Ten with Achy Obejas 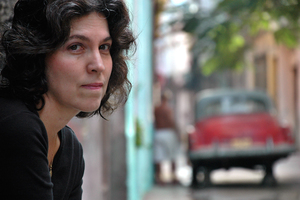 The PEN Ten is PEN America’s weekly interview series. This week, guest editor Natalie Diaz speaks with Cuban-born Achy Obejas, the author of the critically acclaimed novels Ruins and Days of Awe, and three other books of fiction. Her poetry chapbook, This is What Happened in Our Other Life was both a critical favorite and a best-seller. Her translation, into Spanish, of Junot Díaz’s The Brief Wondrous Life of Oscar Wao (La Breve y Maravillosa Vida de Óscar Wao) was a finalist for Spain’s Esther Benítez Translation Prize from the national translator’s association. A 2014 USA Ford Fellow, she is currently the Distinguished Visiting Writer at Mills College in Oakland, California.

If I were choosing a team, for competition—kickball, dodgeball, war, literary death match, Spanish curse-word contest—I’d choose Achy Obejas first. I met her and her work recently, in Chicago, her old stomping grounds, at a gathering of USArtists. I read with Achy and Chris Abani to kick off the gathering—several times throughout her reading, I thought, I want my words, my language, my writing to do what hers are doing. I returned from Chicago to my desert and read all I could find of her work. She is so many things: part ocean, part current and wave, part fighter, all lover and witness. It was my luck to ask Achy Obejas the PEN Ten Questions and to share them with you here.

Strangely, bizarrely, unexpectedly…my office at Mills College has become a real refuge. I’ve never, ever, worked well in an office or space outside my home or where I’m staying, so this is a real surprise. Then again, there’s a three-year-old running around my house now…

Yeah, all but one civil disobedience arrests. I’ve lost track. And that one, well, I was young and foolish and too proud and jealous and…

I go through phases. In reading, I had a really intense Gertrude Stein phase, then a Reinaldo Arenas phase, a Mercè Rodoreda phase, and a Michael Ondaatje phase and on and on. I’m currently on a Herta Müller kick. And I get obsessed about places: Berlin, New York City. When I lived in Chicago, it was Chicago. Then it was Havana. Right now it’s North Korea. And there’s also food, of course, but those are perversely personal obsessions. I’m always convinced they reveal more than just my palette preferences.

Every piece has its own risks. I thought the translation into Spanish of Junot Díaz’s The Brief Wondrous Life of Oscar Wao was particularly loaded, though: First, Junot is my friend, and it had to be just right. Second, we’d made a decision to give the translation a very Dominican/Caribbean bent, and I’m Cuban, not Dominican, so I knew off the top it would be flat-out unacceptable in some circles. I worried that in trying to get close to Junot’s voice—to really try to capture his voice in Spanish, not just translate—it would be seen, not only as not very conventional—no big deal on that!—but also, perhaps, as falling short. In the end, the translation got raves, and Junot was happy, so all was good in my world.

It goes back to our responsibility: Writers—all artists—have a responsibility, methinks, to illuminate, however small, their corner of the world.

The body is political, especially for women and people of color. Sound and language begin as energy in the body. How do you inhabit or understand your body when you read and/or write?

I struggle a lot with my body. I had been blessed with good health most of my life, easy (and adequate) athleticism, and I took a lot for granted. I didn’t do much prepping for getting older, or much work at all. Now I’m about to turn 59 and I’m dealing with arthritis and, very recently, a rare form of Meniere’s Disease called Cochlear Hydrops (basically Meniere’s without the vertigo), which means I will eventually be deaf in both ears. It’s humbling and humiliating and I’m constantly adjusting. I’ve never felt so fragile or been so aware of my body. And that has begun to affect both my practice and the content of my writing.

We all have a language and system of images that are our own, that were built into our lexicons from the fragments and musics of places and people we come from. What is a word or image that haunts your writing or that you find yourself revisiting, and what does it mean to you, what or where of your life is it made of?

My most recurrent images involve water, and specifically, our rescue in the Straits of Florida when we escaped from Cuba: our small wooden fishing boat up against a giant oil freighter so big it was like a giant wall, and Cuba on the other side, unseen.

I’m not sure I get what you mean by observation, but I lived in Cuba for a while as an adult, and my girlfriend then was an artist who did very provocative work, so I understand surveillance—if you mean government surveillance—as a very real thing. We were followed, our phones were tapped, people were planted in her work crew to spy on us. What struck me then was how we adapted to it—really, how I adapted to it, because my ex-girlfriend, having grown up with it, just assumed it as a fact of life. It was both a relief and a very weird sensation to experience that accommodation, because while it made our day to day easier and actually caused less stress, it also made me understand how totalitarianism depends on our adaptation as well.

Natalie Diaz was born in the Fort Mojave Indian Village in Needles, California. She is Mojave and an enrolled member of the Gila River Indian community. She is the author of the poetry collection When My Brother Was an Aztec. Her honors and awards include the Lannan Literary Fellowship, a Native Arts Council Foundation Fellowship, a USArtists Ford Fellowship, and a Princeton Hodder fellowship. Diaz splits her time between Princeton and Mohave Valley, Arizona, where she works to document and revitalize the Mojave language. For the PEN Ten, she’ll be interviewing writers whose work is a war-cry and who are also fierce supporters and champions of women writers and writers of color.