The PEN Ten with Abdellah Taïa 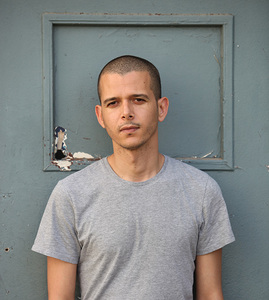 The PEN Ten is PEN America’s weekly interview series. This week, we speak to Abdellah Taïa, the first openly gay autobiographical writer published in Morocco. Taïa is the author of Mon Maroc and Le rouge du tarbouche, both translated into Dutch and Spanish, and the novel An Arab Melancholia. His latest novel, Le jour du Roi,was awarded the prestigious French Prix de Flore in 2010. Moroccan by nationality, he has lived in Paris for the last eight years.

Abdellah Taïa will be participating in three events at the PEN World Voices Festival: Literary Quest: Westbeth Edition on April 28, Translation Slam on April 29, and The Fictional Other on April 30, where he will discuss the gay coming-of-age genre in the Middle East and transgender fiction in Brazil with Saleem Haddad and Alexandre Vidal Porto.

In September of 1992. In order to improve my French, I decided to start writing a “crazy diary” in a language not my own: the language of Paul Verlaine, my favorite French poet—he was crazy, too.

The work of Paul Bowles, “the possessed saint of Tangiers.” He was a weird guy. Morocco, a very strange country, was the perfect place for him to live. I love him tenderly and I adore everything he wrote about Morocco.

Cinema. Egyptian cinema, forever. Everything that I am as a person and as a writer derives from the images I discovered in the ’80s on our small, black-and-white TV. Before that, the fingers of my big sister’s husband. I still dream about them, and am very much surprised that I have yet to write about them.

My love for my big brother.

I said things about my mother in my books, but I never meant to hurt her. She didn’t understand. She died in 2010. I have regrets now…

To help other people and, if it’s possible, to influence them. To free them from the political jails we are all living in.

I have always functioned alone. I believe in a single voice changing the world. I don’t place much trust in groups.

Yes. In Rabat, Morocco. 1997. Midnight. After watching a bad French movie in a ciné-club, I was walking towards a taxi stand. Two men stopped me and identified themselves as police officers. They asked what I was doing in the streets so late. I didn’t answer. Instead, I asked to see their badges. Big mistake. What was I thinking? That I lived in a real democracy? They showed me nothing. They took me down to the station and I spent the night with some fascinating and scary people: drunks, gay prostitutes, and some Islamists beautifully reciting from the Qur’an. We didn’t sleep. By the end of the night, we were all friends. I’ve never written about that night. I should.

One Thousand and One Nights. It’s about transgressions, about crossing all kinds of borders (political, literary, sexual, gender, reality, etc.). It’s the greatest book ever written in Arabic.

On the internet, of course. We are living in the age of a new chaos. A new jail.