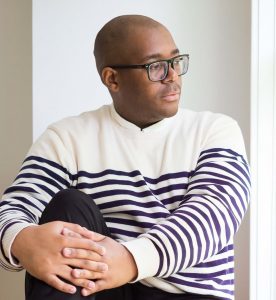 1. What was the first book or piece of writing that had a profound impact on you?
I grew up in a profoundly religious family, so the first book that had a real impact on me was the Bible. It was alternately terrifying and amazing, and it made the whole world into a very charged and strange place.

2. What does your creative process look like? How do you maintain momentum and remain inspired?
My process is pretty straightforward. I’m not a particularly precious writer. With fiction, it always begins with a very specific set of images: I see characters’ clothing and outfits, and I begin to imagine what sort of people they are to wear those clothes. The easiest way for me to get inspired is to look at clothing catalogs. Character flows from wardrobe, in some sense. And then I move pretty quickly to drafting. When I’m drafting, I just write until I get tired. I can usually draft a story in one sitting. Some stories take a little longer, but it’s not uncommon for me to draft two to three stories a week.

Nonfiction is harder for me. I find it the total opposite of fiction. I don’t enjoy it! So, while I can draft a story in a sitting, it takes normally two to three sittings to draft essays. It’s just such a miserable experience that I try to avoid it as much as possible. There’s so much more thinking in nonfiction, so much more confrontation with myself and my own ideas that it’s just super tedious, and I feel stupid the whole time.

“Growing up fat, black, queer, and poor in rural Alabama during the ’90s and early 2000s certainly influenced my world view. And my world view is the channel through which the world passes into my experience, and all artists are drawing on experience to weight their work.”

3. How does your identity shape your writing? Is there such a thing as “the writer’s identity?”
I think that we live in a moment where capitalist forces incentivize writers to turn their identities into substrate for the media machinery. It feels as though there is a great deal of pressure to generate art that seems to exist solely for the purpose of slotting it onto a peg and running it out to the market like dishes in an automat. Look only to the contemporary landscape of short, pithy essays that try to tie every single artifact of culture to some essential, readily definable attribute of your identity. In some sense, short of capitalism itself, the greatest pressure facing a lot of artists in the United States in particular is the pressure to generate mirrors and representation, and I find it all really boring and actually kind of corrosive to the public discourse. I hate it.

But yeah, growing up fat, black, queer, and poor in rural Alabama during the ’90s and early 2000s certainly influenced my world view. And my world view is the channel through which the world passes into my experience, and all artists are drawing on experience to weight their work.

4. What is one book or piece of writing you love that readers might not know about?
I know that a lot of people know André Aciman from Call Me by Your Name, but I think everyone should read his collection of essays, False Papers. It was the first set of essays I ever read, and it totally altered my sense of the world. He is one of our great stylists, and False Papers is a real testament to that. It’s stunning, moving, and so incredibly astute about how we both belong and don’t belong to a place, to a time, to a family, and to ourselves. It’s astounding.

“Nothing is ever as it appears in fiction, I think. It’s almost always a composite of different truths.”

5. Real Life continues the tradition of the campus novel. How did the form lend itself to the story? What ownership of the form did you seek while writing it? 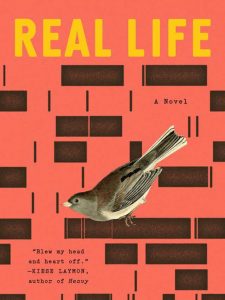 I don’t know if I was trying to take ownership of the genre exactly, but I was deeply interested in telling a story about a queer black man who has spent his entire life operating within that particular space, the campus, which is often seen as being this weird extension of white and bourgeois values. It seemed to me that to tell a story set on a campus in the United States, was to center the story on the lives of heteronormative white people from suburbs. And I wanted to ask, what happens when you center the story on someone who is none of those things? Does it still maintain the other aesthetic parameters of a campus novel? How does making the story about a queer black man deform those parameters? Does the novel still read as a campus novel, or does the presence of race, sexuality, and class as visible signifiers make the book seem like something else? It’s been interesting to see the number of people not quite able to reconcile the campus novel aspect of Real Life and the fact of its protagonist’s race, sexuality, and class. They keep wanting to call it something else.

6. What advice do you have for young writers?

Be kind and patient with yourself as you become the writer you need to become in order to write the thing you want to write. So much of writing is just outlasting your self-doubt and worst habits. Be honest and firm, but above all else, be patient and steady. It will come.

7. Which writer, living or dead, would you most like to meet? What would you like to discuss?
I would like to meet the Canadian writer Mavis Gallant. She’s my favorite writer, and I’ve learned so much from studying her stories. I’d love to talk to her about what it was like to write during a time of great political upheaval and strife; how she approached writing about displaced peoples and the end of a collective delusion about the way the world was and had been without leaning into cynicism or sentiment. It really feels impossible, like some kind of paradox or riddle, trying to resolve the scale of tragedy we face on a daily basis with the smallness you need to tell a story rooted in human feeling and drama. She does it without trivializing global catastrophe and without sacrificing the real stuff of daily life. Her vision is so true and exacting, and her work is charged with the political—whatever that word means to us today. I just would love to talk about that, but I suspect she’d be characteristically nonchalant about it, and she would probably say something like, Just get on with it.

8. The protagonist in your novel, Real Life, shares similarities with your own. How do you translate personal experience, knowledge, and observations into fictional writing? What was your process in writing Real Life?
I’m not sure I have a sophisticated or interesting answer to this question. When I was planning Real Life, I realized that one of the reasons I had failed to write a novel before was that I spent a lot of energy trying to create a character who was so wildly different from me. I would invent jobs, lives, families, and settings, and I’d try to create a whole set of materials that were alien to me. And by the time I finished doing that, I just had no gas left in the tank.

So, when I sat down to write Real Life, I resolved that I wouldn’t waste my time or spin my wheels trying to invent details when I could just take them from life. I made Wallace quite close to myself as a starting condition. Similar to me, but not me. And then I let the story work on him. To me, you can take situations and scenarios from life, and run them as a kind of simulation in fiction. Fiction is this virtual space where you can revisit things and view them from other angles. To me, translating the personal, raw material of life into fiction is sometimes a matter of taking something that happened, setting it down into a story, and then letting the natural weights and measures of the story distort it into something fictional—something that is true for the context of that particular story but which bears only a passing resemblance to its reference material.

There are things in the novel that began as real things about me, or almost real things about me, but by the end of the writing process, they had changed so much. They had been combined and recombined with other materials from other places, that they were entirely fictional. Nothing is ever as it appears in fiction, I think. It’s almost always a composite of different truths.

9. What is the most daring thing you’ve ever put into words? Have you ever written something you wish you could take back?
The most daring thing I ever put into words was probably an essay I wrote about my relationship with my mother. And it wasn’t any of the negative stuff that felt daring to me. None of that stuff felt particularly personal to me. Her cruelty, meanness, and all of the bad things about her felt like they belonged to the world already. Maybe that’s how it is. It doesn’t feel vulnerable to express something that makes you out to be the more sympathetic character in an interaction. Perhaps we’re all a little more willing to tell stories in which other people behave destructively toward us than to tell stories in which we are the one at fault.

In that essay, to me, the most daring thing was to admit that I had improperly comprehended her. That her life was as full of meaning, desires, passions, love, and loss as my own. It was admitting that I had been a part of something that had harmed her and rendered her horizon of possibility smaller. I felt quite exposed enacting empathy toward her in that way in writing. And for weeks before the piece was published, I felt sick and wanted to take it back.

10. Which writers working today are you most excited by?
There are so many incredible writers at work today, but among the most exciting to me personally are Derrick Lynn Austin, Jayy Dodd, Kamden Hilliard, C Pam Zhang, Jamil Jan Kochai, Elisa Gabbert, Nafissa Thompson-Spires, and T Kira Madden.

Brandon Taylor is the senior editor of Electric Literature’s Recommended Reading and a staff writer at Literary Hub. His writing has earned him fellowships from Lambda Literary Foundation, Kimbilio Fiction, and the Tin House Summer Writer’s Workshop. He holds graduate degrees from the University of Wisconsin-Madison and the University of Iowa, where he was an Iowa Arts Fellow at the Iowa Writers’ Workshop in fiction.

The PEN Ten: An Interview with Tochi Onyebuchi

Writers like @Tayari Jones are stepping up to get the word out about PEN America's Writers' Emergency Fund. Donate today! 100% of your donation to the fund will go directly to writers most directly affected by the #COVID19pandemic: https://bit.ly/39FX8Aa.

Today on #ThePENPod, author and @pen_ev alum #ParnazForoutan highlights how immigrant voices are crucial to hear amid this crisis. We also talk about the curtailment of free speech and the status of our nation’s jails and prisons. LISTEN 🎧: https://bit.ly/39E2R9H.