The PEN Ten: An Interview with Hanif Abdurraqib 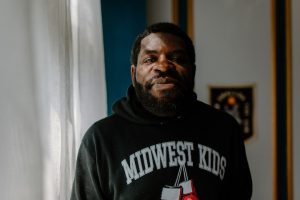 1. Why do you think people need stories?
I can only speak for myself, really, especially because I don’t want to overstate the gravity of stories in the lives of people I don’t know and communities I’m not familiar with. But I’ve needed stories as a way to keep loved ones alive, as a way to contextualize histories, as a way to push back against things I was told to believe and accept.

2. What was the first piece of writing that had a profound impact on you?
I think it was Virginia Hamilton’s The People Could Fly. To see folktales positioned in this way—centering Black freedom—imbued me with an immediate sense of wonder.

3. What’s a piece of art (literary or not) that moves you and mobilizes your work?
Stevie Wonder’s Songs in the Key of Life, which still seems as impossible to me now as it did when I first heard it.

“I’ve needed stories as a way to keep loved ones alive, as a way to contextualize histories, as a way to push back against things I was told to believe and accept.”

4. What do you read (or not read) when you’re writing? Do you listen to music as you write?
I write in silence, but I like to edit with noise present.

5. There are a lot of phases to publishing a book that not everybody knows about. Which would you say was the most challenging for you?
I’m grateful for it all, but I’m not necessarily good at moving past my own anxiety to get to gratitude, though it does feel like I’ve figured a bit of that out better this time around. It only took five books.

6. In A Little Devil in America, you unpack so many culture-defining moments in the history of Black performance—from moments you witnessed firsthand to those that took place far before you could. What was your research process like? What were some of your favorite sources to look at when writing this book?
The research process for this book was very visual—I spent time in photo archives, watching hours of old performance videos. It was somewhat miraculous, to confirm that these obsessions I was chasing were just as marvelous (or more so) than I was imagining them to be in my head. I pulled from everywhere: YouTube, old magazines, actual hard drives of television show episodes.

“I have learned from those who told me my work was not gentle enough, and understood it to mean that I was becoming too hardened by the world. And I’m always up for correcting that course.” 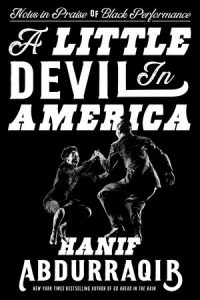 7. Like a musical composition, the book is separated into movements. Each movement opens with a personal essay that reads with the spontaneity of a section of improvised music, which grounds the performance history anecdotes that follow. Did you know from the beginning of your writing that you wanted to structure your book in this way?
No, but it became pretty clear to me early on that the book was orbiting a small handful of central concerns that were, of course, personal to me. And so, it seemed logical to put those concerns into compartments that were sort of held up by these short bursts of personal writing as introduction points.

8. From costumes to tests of endurance to heartwarming displays of partnership, the history of entertainment is full of surprises. What was the most surprising finding that you came across when writing this book?
The story of Ellen Armstrong, the first Black woman magician to headline her own show. I didn’t find as much on her life as I wanted, but I’m still digging.

9. What is one critique of your work that you have really learned from?
I have learned from those who told me my work was not gentle enough, and understood it to mean that I was becoming too hardened by the world. And I’m always up for correcting that course.

10. What’s the worst piece of advice you’ve ever received on writing?
That I had to write every day in order to “be” a writer.

Hanif Abdurraqib is a poet, essayist, and cultural critic from Columbus, OH. His poetry has been published at PEN American, Muzzle Magazine, Vinyl, and other journals, and his essays and criticism have been published in The New Yorker, Pitchfork, The New York Times, and The Fader. His first full-length poetry collection, The Crown Ain’t Worth Much, was named a finalist for the Eric Hoffer Book Award and nominated for a Hurston/Wright Legacy Award. His first collection of essays, They Can’t Kill Us Until They Kill Us, was named a book of the year by NPR; Esquire; BuzzFeed; O, The Oprah Magazine; Pitchfork; and the Chicago Tribune, among others. Go Ahead in the Rain: Notes to a Tribe Called Quest was a New York Times bestseller, a finalist for the National Book Critics Circle Award and Kirkus Prize, and was longlisted for the National Book Award. His second collection of poems, A Fortune for Your Disaster, won the Lenore Marshall Poetry Prize. He is a graduate of Beechcroft High School.

The PEN Ten: An Interview with Carribean Fragoza

The PEN Ten: An Interview with Forsyth Harmon

The PEN Ten: An Interview with Jamie Figueroa

Tonight’s @PENamerica ceremony was so beautiful! I was deeply honored to be a finalist for the Robert W. Bingham Prize. My heartfelt thanks to judges @ingrid_rojas_c, @elizmccracken, and Ben Marcus. And huge congratulations to winner @MichaelXWang3.✨

Read all about it! Announcing the winners of our top book prizes from tonight's live PEN America Literary Awards Ceremony. #PENLitAwards https://pen.org/press-release/2021-pen-america-literary-awards-given-to-top-literary-stars-of-the-year-lifelong-luminaries-of-literary-excellence/

Thank you to all who joined us for the 2021 virtual #PENLitAwards ceremony. Congratulations to our winners & this year's finalists. Check out all of the books that were recognized for their literary excellence and consider adding them to your bookshelf! https://bit.ly/31Y4HAT