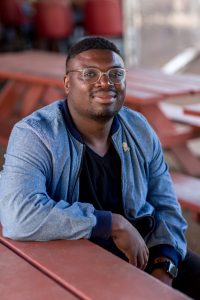 1. What was the first book or piece of writing that had a profound impact on you?
Enid Donaldson’s The Real Taste of Jamaica.

2. How does your writing navigate truth? What is the relationship between truth and fiction?
The trick for me is acknowledging that many different things can be true simultaneously.

3. What does your creative process look like? How do you maintain momentum and remain inspired?
I watched someone ask Bong Joon-Ho this once, and he said, “It’s my job.”

4. What is one book or piece of writing you love that readers might not know about?
Strange Weather in Tokyo by Hiromi Kawakami.

“To say what you want or how you feel is to reveal a little bit of yourself, and that’s scary. But each character in Memorial faces these fears, and others, to the best of their abilities. I wanted to write a novel where each character approaches those fears and reaches toward the folks around them, from a place of love.”

5. What is the last book you read? What are you reading next?
Peaces by Helen Oyeyemi; My Year Abroad by Chang-Rae Lee.

6. What advice do you have for young writers?
Don’t heed the market too much, it doesn’t know what it wants until it wants it.

7. Why do you think people need stories?
I can’t speak for anyone else, but to me, they give life its shape.

8. Your debut novel, Memorial, follows a couple, Ben and Mike, who are, more or less, on the last leg of their relationship and are figuring out where to go next. There are other narrative threads that propel the novel forward, but what made you want to explore these two? Following the success of your acclaimed story collection, Lot, when did you know this was a novel as opposed to a short story? What made you want to expand their world beyond the limitations of the short story?
I wrote the novel because I wanted to find out how it would end. And I figured out that it was a novel when it took me a little longer to get there.

“I think what I’m usually chasing is the answer to a question that I know I’ll never answer, and I’m less interested in the fact of that than the (forever long) journey to get there. . . I’m only interested in a handful of things, honestly, but I’d like to extract as much narrative from them as I can.”

9. The novel, to me, felt quiet—which of course heightened the more climactic scenes, such as the arguments between the couple. But what it also did was make me reflect on the silence, things that aren’t said—literally and figuratively—and things that aren’t decided. At one point, Ben explains, “Non-decision is a choice in itself,” and later in the novel, Eiju, Mike’s father, says, “We’ve always spoken. We just don’t say anything.” I could go on, as it’s a wonderful theme in the novel that’s expressed in multiple ways. But my question is: Why do you think it’s so hard for people to say what they mean, and mean what they say, sometimes in relationships—romantic, familial, or platonic? What made you want to explore this in Memorial?
To say what you want or how you feel is to reveal a little bit of yourself, and that’s scary. But each character in Memorial faces these fears, and others, to the best of their abilities. I wanted to write a novel where each character approaches those fears and reaches toward the folks around them, from a place of love. That’s what I wanted to read.

10. In Memorial, Mitsuko, Mike’s mother, says, “A story is an heirloom.” She adds, “You don’t ask for heirlooms. They’re just given to you.” If an artist makes a mark, whether small or large, there might be someone out there who wants more from the particular artist. There might be someone who, in a sense, asks for more. Still, generally speaking, nobody asks artists to work, to create. Whatever the medium—in this case writing and storytelling—the artist, you, simply gives us an offering. As a writer with two books and articles ranging from ackee and salt fish to the “nexus of queer life in Houston” that are so particular, so singular, what might be the heirlooms you want to give us next? As a writer who appears to have written the books you want to write, can you speak on the “personal thing”—again, as Mitsuko says, or things that interest you and you might explore in the future?
This is a really generous thing to ask someone. I think what I’m usually chasing is the answer to a question that I know I’ll never answer, and I’m less interested in the fact of that than the (forever long) journey to get there. Found families pop up often, and so do seemingly disparate communities that find a way to come together. And also, home—and the idea of it—and the many different permutations that can take. I’m only interested in a handful of things, honestly, but I’d like to extract as much narrative from them as I can.

Bryan Washington is a National Book Award 5 Under 35 honoree, and winner of the Dylan Thomas Prize and the Ernest J. Gaines Award for Literary Excellence. His first book, the story collection Lot, was a finalist for the NBCC’s John Leonard Prize, the PEN/Robert W. Bingham Prize, the Aspen Words Literary Prize, and The New York Public Library’s Young Lions Fiction Award. Lot was a New York Times Notable Book, one of Dwight Garner’s top 10 books of the year, and on best-of-the-year lists from TIME, NPR, Vanity Fair, BuzzFeed, and many more. He has written for The New Yorker, The New York Times, The New York Times Magazine, BuzzFeed, Vulture, The Paris Review, McSweeney’s Quarterly, Tin House, One Story, Bon Appétit, GQ, The Awl, and Catapult. He lives in Houston.

The PEN Ten: An Interview with Jubi Arriola-Headley

The PEN Ten: An Interview with Yamile Saied Méndez

The PEN Ten: An Interview with Jenny Bhatt

Many non-citizens who are in the U.S. are unclear about what rights they have to participate in political demonstrations. Read and share this know your rights guide from @AtRiskArtists for non U.S. citizens: https://bit.ly/NonCitizenRights

On #thePENpod, historian @JuliaRoseKraut discusses writing her new book THREAT OF DISSENT, tracing the history of ideological exclusion and deportation, and PEN America’s role in defending the freedom of expression. LISTEN 🎧 : https://bit.ly/2UdhICF

Read our Works of Justice interview with @lanieprochaine of @tlabnyc, curator of our 11/17 BREAK OUT event, about the art of curation, the power of literary connection during a time of isolation, and the metamorphosis of performance in a digital space: https://bit.ly/3kir5vi