The PEN Ten: An Interview with Mahogany L. Browne

Also, be sure to spend a day with Mahogany on PEN America’s Instagram as she takes over our stories on Saturday, April 25. 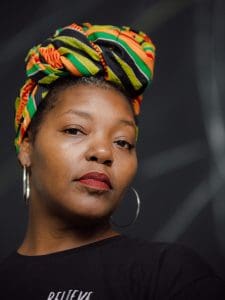 1. What was the first book or piece of writing that had a profound impact on you?
The first profound impact, had to be The Bluest Eye. I was growing up and dealing with colorism in the valley of California. I had never read anything that reflected the insecurities I experienced. But one of the most profound pieces of writing, that changed my mind about storytelling, was Push by Sapphire. It was such a heart-wrenching story. And I was so in awe of how much I wanted to protect the character. I found myself crying at the many obstacles she endured and even threw the book at the wall after it touched a nerve. The nerve was “black girls don’t win.” (I mean, that’s how my teenage self interpreted it.) And I just threw the book against a wall and didn’t pick it up to finish it for another week. I had to heal after reading that book. To be swept away in a life, just by reading. That wasn’t the last time it would happen. But I remember that day vividly.

2. How does your writing navigate truth? What is the relationship between truth and fiction?
After a writing workshop with Nikky Finney, I stopped fighting the truth compass in poems, specifically. I used my experience to add tangibility to the piece, but I couldn’t be beholden to the “truth” of the poem—I had to let the poem be. I found this allowed poems to become their own bodies, with their own histories. I found a lifeline to a world I’d only dreamed of, and of course, never knew before the pen.

“I used my experience to add tangibility to the piece, but I couldn’t be beholden to the ‘truth’ of the poem—I had to let the poem be. I found this allowed poems to become their own bodies, with their own histories. I found a lifeline to a world I’d only dreamed of, and of course, never knew before the pen.’”

3. What does your creative process look like? How do you maintain momentum and remain inspired?
My creative process looks differently considering the project. I am lucky enough to utilize poetry in many different genres, so when I am writing a YA Novel, I write the poem first, then I flush it out over coffee with Gossip Girl or Living Single blaring in the background. If I’m working on a collection of poems, I find time to get up after each poem (or every hour) to walk a little or take a coffee break. If I am writing an essay, I usually pore over it and send it to a reader for first draft edits. Then, I go back and edit with a reality show on in the background. I listen to audiobooks in the morning and read the news at night after I’ve written my word count for the day. If I am trying to build a world, I need the distraction to be minimal. I also learned my creative process requires community. So, I can write alone for a day or two, but by day three, I need a cocktail or yoga class with a friend.

4. What is one book or piece of writing you love that readers might not know about?
I love, love, love, Jesmyn Ward’s Salvage the Bones. It’s one of those books that you can return to again and again. The poetry in the form. The story in the subtext. The texture you can feel. Ward is masterful.

5. What is your favorite bookstore or library?
My favorite bookstore is a tie! Because I love, love, love, books. But, Greenlight is Brooklyn is a fave, as are WORD Bookstore and Books Are Magic. I spend a lot of money at Unnameable Books, because it’s a secondhand bookstore as well, which is just my Achilles heel. And who can deny the light that is The Strand?

“When I think of the stories and people I write about now, I realize my identity is carefully crafted with the wit of my grandmothers and the strength of my mother. I am many black women. I am speaking for the women of my family whose cries and pleas were constantly ignored and dismissed.”

6. What is the last book you read? What are you reading next?
Up next, I am reading the advanced reader copy (ARC) of a friend’s book: Everybody Looking by Candice Iloh, and I’m peeling through Ai’s collection of poems. I just finished A Zora Neale Hurston Reader, and on deck is Wicked Enchantment, Wanda Coleman’s collection edited by Terrance Hayes.

7. How does your identity shape your writing? Is there such a thing as “the writer’s identity?”
My identity shaped my writing because I wasn’t supposed to be here writing these kinds of stories. I once worked as a telephone operator for cellphone company, and we would get penalized if they saw us writing at our roaming desks. I had all the scraps of paper; I had mounds of them, just trying to get the words out of my head—the sounds, tastes, and cities I had yet to see. And when I quit, which was soon after the paper ordinance, I never stopped writing again. I decided anything I do from here on out, would free the voices in my head. Growing up a black girl in America, I became aware of who was listening to me when I spoke. And who wasn’t—which was the world. When I think of the stories and people I write about now, I realize my identity is carefully crafted with the wit of my grandmothers and the strength of my mother. I am many black women. I am speaking for the women of my family whose cries and pleas were constantly ignored and dismissed.

8. Which writers working today are you most excited by?
There are so many writers. I’m excited by Kali Fajardo-Anstine, Tochi Onyebuchi, Myriam Gurba, Camonghne Felix, Randy Ribay, and Justin Phillip Reed.

9. What advice do you have for young Black writers?
Find a community of writers you can learn from. Write everywhere. Read everything. There is no one way. There is no one voice. Find your own voice and share it.

“I needed to give myself the same permission: to know a mother and partner could focus on the food of literature, to have the audacity to create in a time where everything around me says, ‘Quiet. Be still. You are not your own.’ My rage brimmed and became the fuel.” 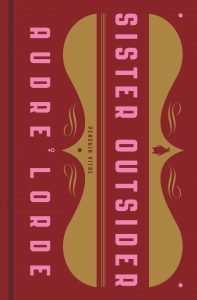 10. Ruminating on Audre Lorde, you write that she perfected the “art of audacity.” What aspects of her writing and being embody this phrase? How has her audacity opened doors for other artists? How has it shaped you—a Black woman, Black woman writer, and a Black mother?
When I found myself spiraling, I tried to pinpoint the source. There were moments that I wasn’t
focused on the writing, but the results of my writing. Book deals and book list celebrations can be beautiful and worrisome. I had to clear my plate. I had to clean the slate. I had to only return to reason for writing. I had to be earnest in wanting to learn craft. I had to be diligent in learning and exploring. I had to be excited to fail and fail again. That meant I was trying something new. That meant I was stretching my limbs and writing with bravery. That meant I was focused.

Lorde’s focus was on her work, whether teaching or writing. Her focus was on the necessity of her writing, even though she was a mother. Although she was a wife, she was unshakeable. I needed to give myself the same permission: to know a mother and partner could focus on the food of literature, to have the audacity to create in a time where everything around me says, “Quiet. Be still. You are not your own.” My rage brimmed and became the fuel. Lorde’s writing allowed me to save myself from myself.

Mahogany L. Browne is a writer, organizer, and educator. She is the executive director of Bowery Poetry Club & Artistic Director of Urban Word NYC, and the poetry coordinator at St. Francis College. Browne has received fellowships from Agnes Gund, Air Serenbe, Cave Canem, Poets House, Mellon Research, and Rauschenberg. She is the author of Woke: A Young Poets Call to Justice, Woke Baby & Black Girl Magic (Macmillan), Kissing Caskets (Yes Yes Books), and Dear Twitter (Penmanship Books). She is also the founder of the Woke Baby Book Fair (a nationwide diversity literature campaign) and as an Arts for Justice grantee, is completing her first book of essays on mass incarceration, investigating its impact on women and children. She lives in Brooklyn, NY.

The PEN Ten: An Interview with Paul Lisicky

The PEN Pod: Defending the Freedom to Write with Karin Deutsch Karlekar

Here's our latest episode of #thePENpod featuring the case of #IlhamTohti. And if you missed it yesterday, check out our full #FreedomToWrite Index here, a count of writers imprisoned globally. https://pen.org/report/freedom-to-write-index-2019/

Also, today, among other things, my brilliant team at @PENamerica released the #FreedomToWrite Index, its first annual global count of writers and public intellectuals unjustly detained or imprisoned worldwide. Check it out! https://pen.org/report/freedom-to-write-index-2019/