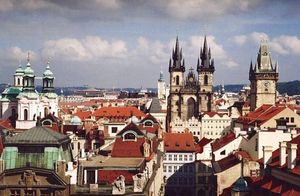 This piece was submitted by Myla Goldberg as part of the 2014 PEN World Voices Online Anthology.

These are the available facts regarding the Clementinum’s Astronomical Tower: it is the pale yellow of butter pecan ice cream; the eight-sided cupola at its apex boasts a wrap-around balcony with a gracefully curved railing and a Baroque statue of Atlas; the tower’s windows are numerous, vary in shape and size, and include four that are perfectly round and vaguely nautical; for eighty-six years the tower was the source of Prague’s noon. This last piece of data is supplied by a spare chronology of the noon signal, unceremoniously affixed to an inner wall of the tower, within a small chamber that serves as a museum for old astronomical equipment. Like so many of the best aspects of Prague this brief biography provides just scant enough information to ignite the imagination.

With modernity, noon has been reduced to a mere number, signifying but no longer representing the moment the sun reaches its zenith in the sky. Local accuracy has been replaced by global synchronization. Barely a century ago, however, noon was still determined by the sun, and in Prague it was determined in the Astronomical Tower’s Meridian Room. The Meridian Room was a dark chamber with a small hole bored in its southern wall. A string ran across this room, representing Prague’s meridian. When the sun’s narrow beam passed through this hole and crossed the string, the sun had reached its zenith: noon had arrived.

By 1842 Prague had become a large and prosperous city with many bell towers, all purporting to ring in noon, but until then there had been no coordination of these bells, and so on the order of the High Burgrave of the Kingdom of Bohemia, a public noon signal service was begun. As noon approached on the morning of July 20th, bellmen observed as a flag was hung from the Clementinum tower. A few minutes before noon this first flag was replaced by a smaller one. When sunlight gilded the string in the darkened chamber below, the flag was withdrawn. The church bells rang. Noon had come to Prague.

The historical record states that the first noon signal was given by the director of the Clementinum’s observatory, but certainly the director would have had more important things to do than give the signal each subsequent day. It seems reasonable to assume a regular signalman was retained, but the sparse history posted within the astronomical tower neglects to mention such a man, confining itself to the signal’s spare evolution and inevitable demise.

According to a centuries-old legend the city’s most illustrious rabbi, Rabbi Loew, once fashioned a golem out of Prague’s clay. To create a signalman from ink, then, is a comparatively modest undertaking. Jiři lived in a small cottage in the Clementinum’s shadow. A widower with a young son, Jiři did odd jobs around the Clementinum compound. He was a proud, meticulous fellow who dressed neatly, cleaned under his fingernails before every meal, and was scrupulously punctual. For twenty years, Jiři executed his tower duty with precision, never missing a noon. Though the signal flag was but one of Jiři’s various functions, it was the only one he held dear. Standing atop the tower, feeling the eyes of the city upon him as he waited for the precise moment at which to withdraw the second flag, Jiři became a man of singular importance, a man upon whom all of Prague depended. His displeasure at the change imposed in 1866—when the two flag method was determined to be too elaborate and noon’s arrival was, the city’s demoted to a single waving flag—would have been understandable. After twenty years of faithful service, to be demoted to just one flag! In tendering his resignation, Jiři would not have mentioned this indignity, instead offering the pretext of old age and the tower’s many winding stairs. After all, there was his son to consider, and while the signal tower had lost its former grandeur, noon was still a paying job.

The historical record does not explain why, toward the end of the century, a single cannon shot from the opposite side of the river was appended to the noon’s arrival, though logic suggests the city limits had expanded beyond the ability of Prague’s more distant bell-ringers to view the tower’s flag. No matter what the cannon’s actual purpose it was likely resented by Jiři’s son, who would have felt upstaged by the addition of artillery, recalling the affront his father had suffered two decades before. A cannon shot was imprecise. As it could be signaled only by the tower’s flag, its retort would mark a lesser, retroactive noon, one that necessarily arrived on true noon’s heels. Jiři Jr. would have balked at being party to such a distortion: he was a second-generation noon signalman with a reputation to uphold. The temptation to resign would have been great, but practicality would have trumped pride. Jiři Jr. was still young, with a family to feed; there was no guarantee a replacement would wave the flag with the crisp precision Jiri Jr. had learned from his father. To spare noon further degradation—and himself his family’s dismay—Jiři Jr. would have remained.

The existence of such a son seems the easiest way to explain what happened next. In 1891, the time zone—a concept that originated in England—crossed the Channel. Across Europe, time became a gentleman’s agreement: it was decided the continent would be divided into four regions, each with its own noon, Prague’s coinciding with Vienna’s and Berlin’s. For obvious reasons, such a prospect would have deeply disturbed poor Jiři Jr. He, like his father, had pledged fealty to the Jesuit’s string. His signal man’s heart knew noon was non-negotiable. And so, when the observatory director issued the new decree, Jiři Jr. would have acquiesced without complaint. He would have agreed to follow the new procedure. And then he would have done what he had to do.

The modest printed page affixed to the observatory’s interior states simply and without fanfare that for twenty years, Prague’s noon trailed Vienna’s and Berlin’s by 140 seconds, remaining true to the moment the sun reached its zenith over the city. This sentence, hidden within an otherwise dry timeline, invites the reader to overlook its significance: for two decades a temporal insurrection was waged. There is no mention of the author of this revolution, no description of the daily battles that were fought. For twenty years Prague defied the rest of Europe and then—for reasons the thin chronicle fails to mention—it stopped. In 1912, Prague’s noon joined Central Europe’s. The insurrection ceased.

Here is how it must have happened: for twenty years Jiři’s son feigned loyalty to Greenwich but remained true to Prague’s meridian. For twenty years he watched the string. It was a weighty secret to carry, the secret of a city’s noon, but it would have been an easy one to keep. Time is too ubiquitous not to be taken for granted: to question it is like questioning the sun. When the signal flag waved, no one would have had any reason to suspect their noon was late.

He died in 1912, when the stairs finally became too much. He died on the tower after the sun had reached its zenith, with the signal flag clutched in his hand.

This piece is excerpted from Time’s Magpie: A Walk in Prague by Myla Goldberg, Crown (2004).