The Human Face of the Free Expression Crackdown in China 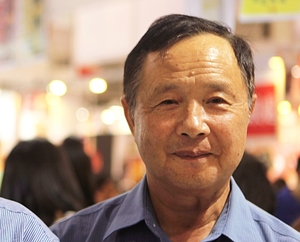 What would you do if your publisher was detained after something so innocuous as delivering a can of paint to a friend? What if your colleague was detained incommunicado, his wife arriving home to find 30 or 40 police officers rampaging their home, their young children threatened by force when they tried to move from the couch? What about a leader of the human rights organization you support? What if he was sentenced to prison for speaking out for you? And what if you were forced out of the country in which you had been working for more than six years because of a supposed technicality?

That’s the thing about crackdowns on free expression: they have human faces. Yao Wentian, a Hong Kong-based publisher who was priming to publish a scathing new book by Independent Chinese PEN Center member Yu Jie, was detained last October when he traveled from the special administrative region (Hong Kong) into the mainland next door. He’s being charged with “smuggling prohibited items” and has been held in a prison hospital because of deteriorating health.

As we noted in Creativity and Constraint in Today’s China, dissident Chinese authors, even those living inside China, might only find publishers for their books in Hong Kong or Taiwan—their work is often banned on the mainland. Those works might then find their way inside China in suitcases or in scans of pages attached to an email. That a Hong Kong publisher—one known to work with dissidents, including the Independent Chinese PEN Center itself—was arrested, and that a trumped-up charge was used to justify his detention, is more than a worrying development.

Ilham Tohti, a Uyghur PEN Member and scholar at Minzu University in Beijing, has faced harassment since riots broke out in his homeland in the Xinjiang Uyghur Autonomous Region in the summer of 2009. Last fall, he was rear-ended and his family was threatened. Now, he has vanished. Chinese authorities admit to holding him, but will say not a word about where.

Tohti has peacefully expressed his opinions, scholarly and otherwise, about the simmering resentment of the Uyghur people—much like the Tibetans—over the Chinese government’s repression of their culture, language, and speech. Yet he’s being accused of engaging in separatism, a charge lobbed at the Dalai Lama when government officials call him a “wolf in monk’s robes.” The penalty is hefty—up to life in prison.

There are citizens—non-writers—who are speaking out on these issues and speaking up for those accused. There’s a grassroots civil society movement that has taken hold since Liu Xiaobo was put away for 11 years for launching Charter 08 in 2009. But if you happen to be leading those calls for the government to protect its citizens’ rights, you’ll be put away, too. Xu Zhiyong, who wrote movingly in the New York Times about the 100 self-immolations in Tibet at the end of 2012 (the number has since grown to over 120), is now serving a four-year sentence for “gathering crowds to disrupt public order.”

Supporters gathered around the courthouse to protest the proceedings against Xu and were dragged away by police. Journalist Andrew Jacobs reported on that side of the story in a video on the New York Times website. He, too, was at the center of a free expression struggle over the last few months: he was one of two dozen journalists from the New York Times and Bloomberg News teased with the possibility that their visas to work in the country might not be renewed at the end of the year. In the end, Jacobs’ was granted, but his colleague Austin Ramzy was shut out.

Ramzy, a veteran correspondent who worked for Time magazine for six years before moving over to the New York Times last year as a contributor, was accused of violating Chinese visa regulations by not changing his visa type while awaiting new press credentials for the New York Times and continuing to work under his exisiting—unexpired—visa. But he handed in his accreditation for his previous employer in May and requested a new one. He never received it. It was a game of tit-for-tat after the Times exposed the wealth and corruption of high-ranking Chinese officials. Ramzy was the casualty this time, but more and more it is the Chinese people who are getting the losing hand.

The New York Times has a website in Chinese. It’s been blocked since its launch in 2012—one of many Chinese language websites unseen by everyday Chinese because of the strong arm of the censor.

The message seems clear: it doesn’t matter if you’re western, Han Chinese, Uyghur, or a citizen of a slightly freer municipality. If you speak out against the regime, or aid your countrymen in doing so, or just simply report on what you see, you’re going to pay the price.

So take a minute and perform this exercise: Close your eyes, and imagine you were a writer, a publisher, a PEN supporter living in China. What do you see?

"When a would-be murderer plunged a knife into Salman Rushdie's neck he pierced more than just the flesh of a renowned writer. He sliced through time, jolting all of us to recognize that..." (1/x)