The Destiny of Me 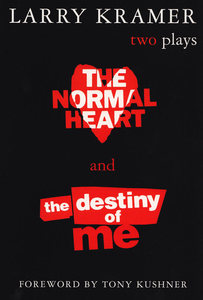 (NED WEEKS, middle-aged, enters a hospital room with his suitcase.)

NED: I grew up not far from here. The trees were just being chopped down. To make room for Eden Heights. That’s where we lived. That’s what they named places then.

(HANNIMAN, a nurse, pushes in a can with medical stuff on it, including NEDV records. She is black)

HANNIMAN: The eleventh floor is our floor—Infectious Diseases. We ask that you don’t leave this floor, or the hospital, or the Institute’s grounds, or indeed go to any other floor, where other illnesses are housed. Dr. Delia Vida says it’s better to have you on our side. I tell him you’re never going to be on our side. You’re not here to cause some sort of political ruckus? Are you?

NED: (Unpacking some books) What better time and place to read The Magic Mountain?

NED: I’m here for you to save my life. Is that too political?

NED: I never understand why you talk to me …

TONY: I’m very fond of you.

HANNIMAN: “Dr. Delia Vida runs the biggest waste of taxpayers’ money after the Defense Department.” In the Washington Post.

TONY: No, in the Washington Post he compared me to Hitler.

HANNIMAN: No, that was in the Village Voice. And it was “you fucking son-of-a-bitch of a Hitler.”

TONY: Where was it he accused me of pulling off the biggest case of scientific fraud since laetrile?

TONY: (Studying NED’S file.) All your numbers are going down pretty consistently. You didn’t listen to me when you should have.

NED: Ah, Tony, nobody wants to take that shit.

TONY: Nothing works for everybody.

NED: Nobody believes you.

TONY: Then why are you here?

NED: I’m more desperate. And you sold me a bill of goods.

TONY: You begged me you were ready to try anything.

NED: I asked you when you were going to strike gold with something. You’ve spent two billion dollars.

TONY: No, sir! You asked me if I had anything I would take if I were you.

HANNIMAN: Yep, he sure is on our side.

NED: (Reading from a newspaper clipping) “Dr. Delia Vida has discovered a method to suppress the growth of the virus in mice by 80-90% …” The New York Times.

TONY: For over a decade you have mercilessly condemned that newspaper’s coverage of this illness. Suddenly they’re your experts?

NED: (Another clipping.) “ . . . reconstituted genes will he introduced in transfusions of the patient’s own blood . . . cells given new genetic instructions, to self-destruct if they are infected.” The Lancet. (A third clipping) “Conclusion: The success of this theory in in vitro experiments, followed by the successful inoculation of three West African sooty mangabey monkeys, leads one to hope that human experimentation can commence without further delay.” The New England Journal of Monkeys. I’ll be your monkey.

HANNIMAN: Don’t say that. We have to guarantee each chimp a thirty-thousand-dollar retirement endowment. Their activists are better than your activists.

TONY: How have you been feeling? (Starts examining NED.)

TONY: You are depressed. That’s too bad. You’ve been very useful.

TONY: All your anger has kept us on our toes.

HANNIMAN: They have yelled at, screamed at, threatened, insulted, castigated, crucified every person on our staff. In every publication. On every network. From every street corner. Useful?

NED: Who is she? I’ve been infected for so long, and I still don’t get sick. What’s that all about? Everyone thinks I am sick. Everyone around me is sick. I keep waiting to get sick. I don’t know why I’m not sick. All my friends are dead. I think I’m guilty I’m still alive.

TONY: Not everybody dies in any disease. You know that. Your numbers could even go back up on their own. Why is my hospital surrounded by your army of activists? Am I going to he burned at the stake if I can’t restore your immune system?

NED: I’m not so active these days.

HANNIMAN: Why don’t I believe that?

NED: What have we achieved? I’m here begging.

(NED suddenly reaches out and’ touches ‘TONY ‘s face. HANNIMAN’s back is turned?)

This new treatment—you can’t even stick it into me legally. Can you?

NED: The world can’t be saved with our mouths shut.

TONY: Give me lessons later.

NED: How long can you keep me alive? I’ve got work to finish. Two years. Can you do that?

NED: How about three? It’s a very long novel. Why are you willing to do this for me?

(From the cart, HANNIMAN wields an enormous needle. ALEXANDER, a young boy, is seen dimly on the side. He’s wet from a shower, and wrapped in towels. He comes closer to see what’s going on)

HANNIMAN: Mice and chimps were easy. You’re our first one who can talk back. Drop your drawers and bend over.

NED: I want my mommy.

ALEXANDER: Mommy’s not home yet.

HANNIMAN: You even wrote in The Advocate you’d heard I was a lesbian.

(She rams the hypodermic into his ass.)

(Screams.) We consider that a compliment!

ALEXANDER: Why are you here? (No answer.) Please tell me what’s happening!

HANNIMAN: (Still injecting him.) I think it takes great courage for you to set foot anywhere near here. My husband works twenty hours a day and usually sleeps the other four in one of these rooms. I’m pregnant and I don’t know how. Or why. With the number of patients we’re seeing, I’m bearing an orphan. (Extracts the hypodermic and takes a larger one.)

NED: That wasn’t it?

(She laughs. She administers the second needle even deeper. He screams again, louder.)

ALEXANDER: Tell me what’s going on!

NED: I’m starring in this wonderful play about euthanasia.

ALEXANDER: Where’s Benjamin? Where’s anyone? Don’t you have any friends? At a time like this? Something awful’s happening. Isn’t it? (No answer.) Will you give me a hug?

NED: (Changing from his street clothes.) What do you do when you’re dying from a disease you need not be dying from? What do you do when the only system set up to save you is a pile of shit run by idiots and quacks? What do you do when your own people won’t unite and fight together to save their own lives? What do you do when you’ve tried every tactic you can think of to fight back and none of them has worked and you are now not only completely destitute of new ideas but suddenly more frightened than you’ve been before that your days are finally and at last more numbered and finite and that an obit in the New York Times is shortly to be yours? Why, you talk yourself into believing the quack is a genius (Massages Ms sore ass) and his latest vat of voodoo is a major scientific breakthrough. And you check yourself in. So, here I am. At the National Institutes of Quacks.

When we were on the outside, fighting to get in, it was easier to call everyone names. But they were smart. They invited us inside. And we saw they looked human. And that makes hate harder.

It’s funny how everyone’s afraid of me. And my mouth. And my temper. They should only know I can’t get angry now to save my soul. Eight years of screaming at one idiot to wake up and four more years of trying to get another idiot to even say the word can do that. They knew we couldn’t keep up the fight and that eventually they’d be able to kill off all the faggots and spies and niggers. When I started yelling, there were forty-one cases of a mysterious disease. Now a doctor at Harvard is predicting a billion by the new century. And it’s still mysterious. And the mystery isn’t why they don’t know anything, it’s why they don’t want to know anything.

So what does all this say about the usefulness of . . . anything? Yes, the war is lost.

And I’d give anything to get angry again.

ALEXANDER: (Reappearing still wrapped in towel.) You are not going to die!

ALEXANDER: If you die I die!

ALEXANDER: I kept you alive for quite some time, thank you very much!

NED: Lemon—get the fuck out of here.

ALEXANDER: I was here first! Are you rich and successful and famous? Two of them? One? Did you fall in love? (No answers) Every single second of my entire life I’ve wanted there to be somebody! I gave you great stuff to work with. How did you fuck it up? Excuse me for saying so, but I think you’re a mess.