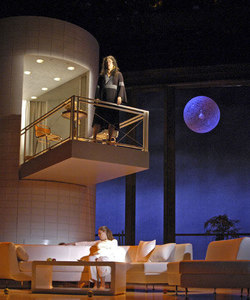 Lane: A doctor, a woman in her early fifties. She wears white.

Matilde: Lane’s cleaning lady, a woman in her late twenties. She wears black. She is Brazilian. She has a refined sense of deadpan.

Virginia: Lane’s sister, a woman in her late fifties.

Charles: Lane’s husband, a man in his fifties. A compassionate surgeon. He is childlike underneath his white coat. In Act I, Charles plays Matilde’s father.

Ana: An Argentinean woman. She is impossibly charismatic. In Act I, she plays Matilde’s mother. She is older than Lane.

Note: Everyone in this play should be able to tell a really good joke.

Matilde tells a long joke in Portuguese to the audience.
We can tell she is telling a joke even though we might not understand the language.
She finishes the joke.
She exits.

Lane, to the audience:

Lane: It has been such a hard month.

My cleaning lady—from Brazil—decided that she was depressed one day and stopped cleaning my house.
I was like: clean my house!
And she wouldn’t!
We took her to the hospital and I had her medicated and she Still Wouldn’t Clean.
And—in the meantime—I’ve been cleaning my house!
I’m sorry, but I did not go to medical school to clean my own house.

Virginia, to the audience:

Virginia: People who give up the privilege of cleaning their own houses—they’re insane people.

If you do not clean: how do you know if you’ve made any progress in life? I love dust. The dust always makes progress. Then I remove the dust. That is progress.

If it were not for dust I think I would die. If there were no dust to clean then there would be so much leisure time and so much thinking time and I would have to do something besides thinking and that thing might be to slit my wrists.

My sister is a wonderful person. She’s a doctor. At an important hospital. I’ve always wondered how one hospital can be more important than another hospital. They are places for human waste. Places to put dead bodies.

I know when there is dust on the mirror. Don’t misunderstand me—I’m an educated woman. But if I were to die at any moment during the day, no one would have to clean my kitchen.

Matilde, to the audience:

Matilde: The story of my parents is this. It was said that my father was the funniest man in his village. He did not marry until he was sixty-three because he did not want to marry a woman who was not funny. He said he would wait until he met his match in wit.

And then one day he met my mother. He used to say: your mother—and he would take a long pause—(Matilde takes a long pause)—is funnier than I am. We have never been apart since the day we met, because I always wanted to know the next joke.

I wear black because I am in mourning. My mother died last year. Have you ever heard the expression: “I almost died laughing”? Well that’s what she did. The doctors couldn’t explain it. They argued. They said she choked on her own spit, but they don’t really know. She was laughing at one of my father’s jokes. A joke he took one year to make up, for the anniversary of their marriage. When my mother died laughing, my father shot himself. And so I came here, to clean this house.

Lane enters.
Matilde is looking out the window.

Lane: Are you all right?

Lane: Would you please clean the bathroom when you get a chance?

Lane: The house is very dirty.

This is difficult for me. I don’t like to order people around. I’ve never had a live-in maid.

Matilde—what did you do in your country before you came to the United States?

Matilde: I’m being serious too. My parents were the funniest people in Brazil. And then they died.

Lane: I’m sorry.
That must be very difficult.

Matilde: I was the third funniest person in my family. Then my parents died, making me the first funniest. There was no one left to laugh at my jokes, so I left.

But life is about context.

And I have met you in the context of my house, where I have hired you to clean. And I don’t want an interesting person to clean my house. I just want my house-cleaned.

Lane is on the verge of tears.

Matilde: (With compassion) Is something wrong?

Matilde: Do you tell the nurses at the hospital what to do?

Matilde: Then pretend I am your nurse.

Matilde gets out silver polish and begins polishing.
Lane watches her for a moment, then exits.

Matilde: This is how I imagine my parents.

They are dancing.
They are not the best dancers in the world.
They laugh until laughing makes them kiss.
They kiss until kissing makes them laugh.

Virginia: Hello. You are the maid?

Matilde: Yes.
You are the sister?

Virginia: Yes.
How did you know?

Matilde: I dusted your photograph.
My boss said: this is my sister. We don’t look alike.
I thought: you don’t look like my boss, You must be her sister.
My name is Matilde. (Brazilian pronunciation of Matilde: Ma-chil-gee)

Virginia: I thought your name was Matilde. (American pronunciation of Matilde: Matilda)

Virginia: Nice to meet you.

Matilde: Nice to meet you. I don’t know your name.

Virginia: Oh! My name is Virginia.

Matilde: I’ve never been to Virginia.

Virginia: Maybe I should go.

Virginia: No. I mean, am I interrupting you?

Matilda: No. I was just—cleaning. Your sister is at work.

They enter the living room.

Lane tells me that you’ve been feeling a little blue.

Matilde: Oh. She told you that?

Virginia: Come, sit on the couch with me.

Virginia goes to sit on the couch.
She pats the couch.
Matilde sits down next to her.

Virginia: Do you miss home?

Matilde: Of course I do. Doesn’t everyone?

Virginia: Is that why you’ve been sad?

Matilde: No. I don’t think so. It’s just that—I don’t like to clean houses. I think it makes me sad.

Virginia: But that’s so simple!

Matilde: I’ve never liked to clean. When I was a child I thought: if the floor is dirty, look at the ceiling. It is always clean.

Matilde: You do? Why?

Virginia: It clears my head.

Matilde: So it is, for you, a religious practice?

Virginia: No. It’s just that: cleaning my house—makes me feel clean.

Matilde: But you don’t clean other peoples houses. For money.

Virginia: No—I clean my own house.

Matilde: I think that is different.

Virginia: Do you feel sad while you are cleaning? Or before? Or after?

Virginia: I would love some coffee.

Matilde goes to get a cup of coffee from the kitchen.
Virginia takes stock of her sister’s dust.
Virginia puts her finger on the tabletops to test the dust.
Then she wipes her dirty finger on her skirt.
Then she tries to clean her skirt hut she has nothing to clean it with.
Matilde comes back and gives her the coffee.

Virginia: This is good coffee.

Virginia: Oh—that’s right. You do!

Matilde: Does that help you to place me in my cultural context?

Virginia: Lane didn’t describe you accurately.
How old are you?

Matilde: Young enough that my skin is still good.
Old enough that I am starting to think: is my skin still good?
Does that answer your question?

Virginia: Yes. I have a proposition for you.

Matilde: I don’t get it. What do you want from me?

Virginia: I have my house cleaned by approximately 3:12 every afternoon. I have folded the corner of every sheet. The house is quiet. The gold draperies are singing a little lullaby to the ottoman. The silverware is gently sleeping in its box. I tuck in the forks, the spoons, the knives. I do not have children.

Virginia: (With increasing velocity) Don’t be sorry. My husband is barren. Is that the right word for a man? I never thought that the world was quite good enough for children anyway. I didn’t trust myself to cope with how sick and ugly the world is and how beautiful children are, and the idea of watching them grow into the dirt and mess of the world—someone might kidnap them or rape them or otherwise trample on their innocence, leaving them in the middle of the road, naked, in some perverse sexual position, to die, while strangers rode past on bicycles and tried not to look. I’ve thought about doing some volunteer work, but I don’t know who to volunteer for.

A pause. She looks at Matilde.

Since I was twenty-two, my life has gone downhill, and not only have I not done what I wanted to do, but I have lost the qualities and temperament that would help me reverse the downward spiral— and now I am a completely different person.

I don’t know why I am telling you all of this, Mathalina.

Virginia: I used to study Greek literature. One summer my husband and I went to Europe. It was supposed to be relaxing hut I have trouble relaxing on vacations. We were going to see ruins and I was going to write about ruins but I found that I had nothing to say about them. I thought: why doesn’t someone just sweep them up! Get a very large broom!

Matilde: You were telling me how your life has gone downhill since you were twenty- two.

Virginia: Yes. The point is: every day my house is cleaned by three o’clock. I have a lot of—time.

I’d he very happy to come here and clean Lane’s house before Lane gets home from work. That is what I’m telling you. Only don’t tell her. She wouldn’t like it.

Matilde: I will let you clean the house if it will make you feel better.

Virginia: Let’s start in the bathroom. I love cleaning the toilet. It’s so dirty, and then it’s so clean!