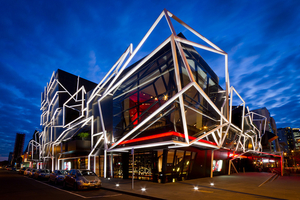 This piece was submitted by Raimondo Cortese as part of the 2014 PEN World Voices Online Anthology.

The space is intimate and non-representational and should reveal itself as a stage, albeit one that demonstrates a private, imaginative quality, a kind of otherworldly apartment. ZELDA and VANESSA are sisters in their forties. While the script assigns names to the characters, in performance the actors should use their own names. The audience should sit close to the action.

ZELDA sits on the floor. She watches VANESSA, who is lying on a couch. There is a book on the floor, as though it has been dropped accidentally. VANESSA sits up, smiles and lies back on the couch. ZELDA continues to watch her.

VANESSA: Clean hands are fine…but that mushy handshake some men give you is another thing.

ZELDA: Yes that is yucky…

ZELDA: I’m not saying I like a guy too well manicured.

VANESSA: You have very particular taste don’t you?

VANESSA: That’s why you haven’t thrown yourself around willy-nilly.

ZELDA: I wish I had.

VANESSA: No you don’t.

VANESSA: Have you ever been stalked?

VANESSA: You know how some guys just seem to crop up wherever you are?

ZELDA: I haven’t experienced that.

ZELDA: What do you do then?

VANESSA: I get rid of them.

VANESSA: I write their name on a piece of paper…fold it three times…then put it in the freezer. Then their whole life just you know…

ZELDA: How many men have you done that to?

VANESSA: I’ve thawed a few out.

ZELDA: So where have you been staying?

ZELDA: Where were you staying all that time?

VANESSA: Not with anyone you know.

ZELDA: You don’t want to tell me?

VANESSA: No I don’t mind telling you.

ZELDA: Who did you stay with?

ZELDA: Why did you have to stay with them?

VANESSA: I wanted to fuck them.

VANESSA: Why? What did you think it was about?

VANESSA: It belonged to another person. I was no longer that person. I could never be that person again. That’s how I saw it.

VANESSA: I had a different guy every couple of months…sometimes less…sometimes more. I don’t mind saying that. I moved about. Went north. Then I came back.

ZELDA: You came back here?

VANESSA: Yeah…you can hide easy enough. If you want to. It’s quite easy. Much easier than you think. There’s this bar I used to go to. I still go there. He sells coffee and biscuits.

VANESSA: And only one drink of alcohol…sol y sombre. To buy that you have to know the barman’s name.

VANESSA: Otherwise he won’t serve you.

VANESSA: He doesn’t have a licence you see. He’s an old man. His name’s José Luis. Very charming. Discreet.

VANESSA: Yeah I talk to him for hours. He can talk in great depth on almost any subject.

VANESSA: You know the bar I’m talking about?

VANESSA: I go there often. All kinds of people go there. The after work crowd…students…locals…anybody really. Musicians go there after their gigs because it’s open so late because it’s not really a bar…more like someone’s lounge-room…but it has this wonderful atmosphere…dancing…and talking…and music…and playing.

VANESSA: It’s got butterflies stuck all over the walls.

VANESSA: When I’m drunk I stare at them.

ZELDA: I probably would too.

VANESSA: They look like they’re flying up and down the walls…busy arranging everything. I often think José Luis is actually working for them. Like the whole place is their idea. We’re just allowed in for their amusement… a sort of social experiment…like they’re dreaming our lives into existence.

ZELDA: Do you meet guys there?

VANESSA: Sometimes. It’s great for what I want.

ZELDA: What do you want Vanessa?

VANESSA: I have this lover at the moment…we talk very openly. Don’t censor anything. That’s what we agreed to do. To have no prohibitions. We agreed to that beforehand…to let our conversation go wherever it likes. I call him Danny.

ZELDA: Is he handsome?

ZELDA: What do you mean?

VANESSA: I wear a blindfold.

ZELDA: How did you meet?

VANESSA: Through one of the musicians at the bar.

VANESSA: The drummer. He organised it.

ZELDA: But what if he’s hideous Vanessa?

VANESSA: I don’t want to.

ZELDA: What if he’s revolting?

VANESSA: I have no idea.

ZELDA: Are you joking? You’re not are you?

VANESSA: I’ve wanted to come back for ages.

ZELDA: I wanted to see you too.

VANESSA: But now…it’s like I’m seeing things now…now for the first time. Does that sound strange?

ZELDA: I missed you.

ZELDA: We’ve all missed you.

VANESSA: Everything seems to have changed.

This piece has been excerpted from the play The Child, which premiered in Australia, in 2011, and was performed by The Melbourne Theatre Co.