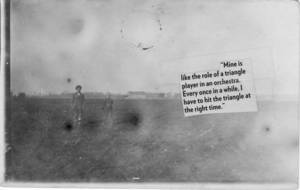 One of the great gifts of our ephemerality is the magic of the word. I can recall, even now, the emotion with which that old man that I was at the age of nine, recently returned from the concentration camp, received, in solemn celebration of his birthday, a book of Romanian fairytales. That summer afternoon of 1945, I was alone in the universe in the silence of the room when I discovered the fascinating, hypnotic, miraculous language of an extraordinary storyteller. I entered then, after years of torment and savagery, in that unreality stronger than reality itself, exploring the world without and within. That is how, at last, I came to understand the dreamy wandering and the aggressive doubt, the self-questioning aimed at the meaning of life and at human vulnerability. Then, in my adolescence, and ever after, even to my present American senescence, I experienced my rebirth in the Romanian language as a means to my life’s great ravishments and fascinations, doubts and vitality, inspiration and thoughtfulness, moments plucked out of what would otherwise become a fraught biographical trajectory.

After the Transnistria concentration camp, the precariousness of every-day life was underscored further by the fact that I felt not simply despoiled of too much, but especially, by the lack of the family library from which so many of my brethren, who had been exempted from my prior wanderings, could still arm themselves with a modicum of resistance against that tyranny qua Utopia.

It was then that the illness and the therapy of literature began for me.

In that great adventure into the unknown, I found more meaningful relatives than those in town hall records, interlocutors of greater acumen than those who surrounded me, as well as a privileged refuge from the calendar’s daily and nightly chaos.

In an adolescence experienced as Stalinism, I read everything I could get my hands on. I read not just the abundantly available products of “social realism,” or Engels’ Anti-Dühring, but also the unforgettable masterpieces, the Russian and French classics, as well as Eminescu’s poetry[1] and Caragiale’s plays.[2] In my Bucharest university years followed Proust, Thomas Mann, and Lautréamont, and in the years after, which brought with them a relative cultural “thaw,” I was accompanied by Kafka and Joyce, Faulker and Bulgakov, Babel and Sabato, Dos Passos and Camus, Kawabata and Svevo, as well as Robert Musil and Bruno Schulz. By means not entirely legal, I also acquired the books of Kostler, Solzhenitsyn, Chestov, Nadejda, Mandelstam, and Raymond Aron.

The formative experience of reading cannot be ignored. We are not just the product of a family or of a society, of a religion or of an ethnicity, of a wound and of a repudiation; we are, lastly, also the product of our reading. Books are biography’s essential “secondary game;”[3] bibliography creates a bookish genealogy that might be more important than the genealogy inscribed in the archives of heredity.

The beings-characters who inhabit library bookshelves make up another world population that speaks to us, with a steadier influence than daily scandals, of the mind and the soul of this planet’s census. They are our faithful companions, our hope and our despair.

Our predecessor, Philo of Alexandria dared to affirm that only the intellect can give true measure and proper form to divinity; that the intellectual nature of Logos allows for a more profound spiritual affinity between individuals than national or organic affinities; intellectual nature being the premise of our relationship to the divine.

In the end, the dictatorship forced me to recognize that I do not live in just a language, as I had deluded myself into believing, but also in a country. When suffocation had become imminent, I left, without ever completely abandoning the unhappy history of the place. My only treasure, the language in which I lived, loved, and dreamed, I took with me, as a snail, setting off, takes up its house. It remains my intimate refuge of uncertainty, the interiority and the creativity that seeks its voice.

Exile is a dislocation and a dispossession that touches the deepest core of the self. The writer, deprived of language undergoes a cosmic catastrophe, as the homeless Cioran used to say, though Cioran did, in the end, manage to hazard a new identity in Montaigne’s language.

I lived through the violent experience of exile at a no longer youthful age, aware of the therapeutic pedagogy of exposing one’s self to the cosmogony of a new shore. Expelled a second time by the caprices of History, I have lived for over twenty-years in the Dada Capital of exiles and in the house of the “Romanian snail,” though also at the cosmopolitan crossroads of many cultures. For me, the “privileged trauma” of exile has made easier the scrutiny of both the world without and the world inside myself. Today, I act with a more intense conscience of the universality and of the cacophony of the everyday, of the vertiginous mercantilism of culture and of consciousness, in our epoch of transactions, surrogates, and the perversion of Logos.

The degradation of reading, at the very moment when books have become more accessible than ever, is not the only paradox that our fellow human beings have bequeathed to us. My gratitude towards the “story of the word” becomes that much more pathetic.

[1] Mihai Eminescu (1850-1889): Romantic poet, considered by many to be Romania’s national poet. A prolific writer, he was the author of prose, theater, journalism, essays, and translations, though he published only one collection of Poems (1883) in his lifetime. He remains best known for the rich, titanic, cosmogonic universe of his lyrics.

[2] Ion Luca Caragiale (1852-1912): Romanian playwright, famous of for his comedies of manners and mores, which scathingly satirized contemporary society. Along with Eminescu, he is thought to be one of the great ‘fathers’ of Romanian letters.

[3] Allusion to Ion Barbu’s (1895-1961) collection of poems, Joc Secund (Secondary Game) (1930). Barbu was a distinguished mathematician and poet, whose hermetic, abstract verse is considered to be a turning point in Romanian modernist poetry.