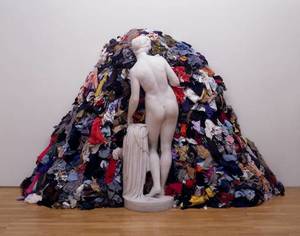 Eleanor Goodman is the recipient of a 2013 PEN/Heim Translation Fund grant for her translation of Wang Xiaoni’s Something Crosses My Mind. Read her introduction to translating Xiaoni’s work here.

Starting Anew as a Poet

At the shortest end of the century
the earth bounces
humans busy themselves like monkeys between trees.

But my two hands
lie idle in China’s air.
The tabletop and the wind
are both pure white paper.
I let my significance
happen only at home.

Rinsing white rice
the rice starch drips like milk onto my page.
To be reborn the gourds extend their fingers
and cry out in fear.
Outside, the sunlight cuts with a knife
heaven’s cold heavy snow.

Each day from morning to night
the door is shut tight.
I hang the sun at the angle I need it
some people say, in this town
lives a person who doesn’t work.

Fastened to the walls
between two small pieces of glass the world self-combusts.
The taciturn butterflies flutter everywhere
the universe unknowingly leaks its secrets.
I foretell the tiniest signs of trouble
without eyes.
Without hands.
Without ears.

Each day I write only a few words
like a knife
cutting into the gush of a tangerine’s finely woven juice.
Let layer upon layer of blue light
enter into a world that’s never been described.
No one sees my light
finely woven strand by strand like silk.
In this city I
silently serve as a poet.

At the Sight of Potatoes

Seeing a basket of potatoes
I was as thrilled as if I’d encountered a ghost.
So thrilled I turned into
a hotheaded northeasterner.

I wanted to stare into their eyes
to find out all they’d been through.

But then
unreasonable emotion
attacked me head-on.
A timid superficial light
fell layer by layer.

All the precise sutures in my body broke.

I wanted to stop right away
stop myself completely
and bum a cigarette off an addict
his last cigarette.

Nothing can attack you
like a basket of potatoes.

Returning to the past
would be like walking all the way to Jupiter.
But today
I saw a basket of potatoes.
And all at once I was stepping
on Jupiter’s burning rings.

I didn’t imagine
after wiping the glass clean
the whole world would immediately infiltrate in.
The last shelter disappeared with the water
even the leaves thickened their eyebrows
to spy in.

I really didn’t imagine
with only two hours of work
and a rag, a huge mistake could be made.

Every thing is proficient at betrayal.
This most ancient craftsmanship
was easily done by a dirty soft rag.
Now I’m stranded in the midst of its violence.

Other people’s greatest freedom
is the freedom to see.
In this complex and beautiful spring
cubism walks across the canvas.
Everyone has gained a superhuman ability to traverse barriers
my life is penetrated in layers.

Hiding in the depths of the house
but exposed to people beyond these four walls
I am just an impoverished bared body.
A thatched peachwood chair
I hide in its wooden strips
my thoughts restless.
The earth ought to be abruptly reduced to dust
I should return
to the pit of that peach tree seed.

Only humans want secrecy
now I’d like to pass myself off
as anything but human.

Silent All the Way From Beijing to Guangzhou

Such a long journey
enough to cut across five small countries
to startle awake five governors dozing in their gardens.
But a Chinese train
is like a peasant with his head stuffed into an ear of corn.

Such a long journey
a scholar riding on the back of a donkey
could read many dreary volumes of the classics.
The golden copper iron on top of the train
sighs at every stop.

Along the tracks people form a bright white funeral procession
a deserted lotus pond turns a profit on the paper money.
More people happily follow the steam whistle into town.

On Chinese trains
I don’t say a thing
At Beijing West people hear the Guangzhou banana trees
shake off their leaves.
As the train nears Guangzhou East
the signals were wrapped in mourning clothes to sink to the seafloor.

I am riding some other rolling power
year after year crossing north and south
trains can’t run just on fire.

The cicadas have me walking between sandpaper
they make it hard to come and go.
Dry and astringent and endless
the paulownia tree ten meters away explodes into bloom
cicadas loom well-hidden overhead.

There will always be bad guys
always people concealing knives.
Today it is the cicadas’ turn.

Who can tell the difference between cicadas and flies and bees
all insects have green glimmering hearts.
I’ve never sized up an enemy face-to-face
so I’ll be hoodwinked again and again
until the curtain falls and entangles me.
Tragedies and comedies have used up their strength.
Not snowy white
not fiery red
until I unconsciously shed all color.

Now I’m walking toward the paulownia that hides the cicadas
like a coward it just stands there
and the world is peaceful and still.

After I’ve paid
the watermelon comes along like a blindfolded prisoner.

We get on the bus
this guy who’s never changed his coat in his life
with no bones but too much blood
who grew up being thumped countless times.

Halfway there I take a turn
there’s always something to keep us from home.
The watermelon with its artificially extended life
hits painfully off the sides of the bus.
It’s as hard to want to die as it is to want to live
nightlights illuminate a knife shop closing up.
The watermelon comes with me
it can only go farther and farther away
I’ll use all my hands to steady its
big blood-filled head.

Seeing the Ocean from a Night Flight

Everything becomes small
only the ocean makes the night’s leather clothes
open up the further out it spreads.

Flying north
to the right is Tianjin
to the left is Beijing
two clusters of moths flinging themselves at fire.

I see the face of the ocean
I see the aged seashore
trembling and hugging the world too tightly.

I have seen death before
but never before seen the dead come back to life.

From Guangxi to Jiangxi
I always glimpse rice-gleaners bent to the ground.

Still there are always people in the dusk
who look like bent black nails.
Who comes to admire the ancient sorcery
of rice-gleaners turning a bit of gold into a grain of rice.

Don’t be like me hurrying along on the train
as though there’s some urgent business to attend to
crossing three provinces in a day
occasionally noting that the earth is still dotted with a few rice-gleaners.

I want to call to them to stand up
to see the faces worth the least gold
to see what color of sweat they produce.

The night of the typhoon, the sky was full, the world destroyed.

From west to east, herds of black cattle rolled on their heads
the wind’s hoofs beat at the windows
everything on the ground rose to the sky.

The people were packed into the night
the night was packed into an exploding drum.
The wildly arrogant air
presented rolling tanks from another world.
There was no sign of resistance
that’s just the way the extraordinary happens.

The plants were chopping off their long hair
nerves that hadn’t had time to die were bouncing everywhere
madmen were destroying the madhouse
it was finally their turn to celebrate a victory.

I sat firmly in a fish-belly
jolted by a full heart running on the clouds.

Heaven pulled out an electric whip.
Wind and rain flattened the city
and scraped off its last layer of glittery golden scales.
All the complacent people quickly retreated in defeat
and the lotus pond swelling outside the window was suddenly dropped.