Sacred or Profane? On Bless Me, Ultima 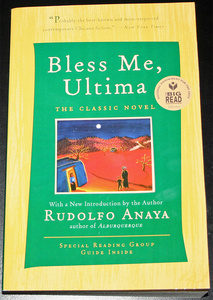 Ultima came to stay with us the summer I was almost seven. When she came the beauty of the llano unfolded before my eyes, and the gurgling waters of the river sang to the hum of the turning earth. The magical time of childhood stood still, and the pulse of the living earth pressed its mystery into my living blood. – Rudolfo Anaya

One of the most influential Chicano texts of all time, Rudolfo Anaya’s 1972 Bless Me, Ultima tells the story of young Antonio, or Tony, growing up under the guiding light of his curandera (a traditional shaman, or healer), Ultima. The story offers a dazzling and often wrenching depiction of Tony’s family’s mixed indigenous cultures and how deeply-rooted their beliefs are, but its inner world is as powerful as the world that created it. Anaya’s success was largely found in this text, where he celebrated the acclaim of being one of the most widely-read Chicano writers. Can you imagine a 1960s America where a Chicano writer said, in essence, now you listen to my story?

Bless Me, Ultima of course became canonical, a deft exploration of evil and good, path and parting.

For some, it is a sin to denounce predestination, to allow that we carve our own way. To me, we came from the earth, and it came from starstuff, and to there we will return. Everything else in between is ours to create, even our freedoms and imprisoning systems. Rudolfo Anaya pinpoints this human experience in Bless Me, Ultima, inspiring ire by way of its “anti-Catholic” exploration of the self, homosexuality and use of profanity. Anaya’s dedication to his New Mexican roots is loud and colorful here, and it blooms from true love. His characterization of the region is potent, and so it is all the more heartbreaking that New Mexican school districts have banned the book.

Like many, Bless Me, Ultima created an insurrection in me. I read it for the first time as a young person, and thought then of the power/burden of free thought. Like Tony, I would never be sated by predestination or expectations—not as a woman, not as a writer and not as a person of Catholic heritage. Darknesses exist. How do we expel them? What works? What inner power must we call on?

No sooner than I learned to speak in full sentences did I think of gods and bodies. Who were they? What was I? As a child brought up within the bleak confines of our family’s Sicilian-Italian Catholicism, I was instilled with the fear of the divine, the fear that the body would burn by flame in the end, the fear that I could be unlovable and unmovable without Christ. And yet, I was only half Italian. I was only half Catholic. I was only half open to these ideas. I was only half. What could make me whole? I stayed up at night thinking of hell, trying to reconcile the demands of purity with my disbelief.

Later, I would connect to Anaya’s sweet protagonist, who fought the tug-of-war between his father’s vaquero heritage and his mother’s: the Lunas and their Catholic ideologies. There is another, more nuanced, deeper issue at play within the book: depictions of religion are often sullied by those who believe. Would Tony and I –and millions of others—have run from the Church had we not seen the terrible, jealous side of God? Is it religion or its people that keep it from allowing us to blossom as autonomous individuals?

Anyone who reads the book can feel the pain that comes with abandoning one’s path, but the ultimate message is: listen, ask, learn, grow. While Antonio chooses choice itself through Ultima’s teachings, there is an undeniable grief to be witnessed here; to ban that  bans general enlightenment, cultural openness and the mystical inner world that propels us to live each day.

The second time I read the book I was in Mesilla, New Mexico during Dia De Los Muertos. I had stumbled into a bookshop owned by the writer Denise Chavez. She cut me up bits of chili peanut brittle and made me cups of coffee, and told me to sit under the gazebo in the Centro so I could feel the energy that history left behind.

So, I tumbled out with a box of books to be shipped back to New York and a copy of Bless Me, Ultima.  I read it in the open sun that day and later that night watched as the people came together to honor the dead. A woman dressed as La Llorona stood on the steps of the Basilica of San Albino. A band played on the gazebo while heritage and belief collided in that place. Tony allowed himself to create a new world that blended these gods and worlds and ideas. What is a life without this merging of things? To fuck and sin and love and want without being pre-ordered not to—to accept what makes us happy and real: this is the celebration.