With support from the U.S.-Russia Foundation, PEN America carried out the Online Publishers and Editors Exchange, which took place January 21-26, 2018 in New York City and California’s Bay Area. The goal of the program was to support development and entrepreneurship in Russia’s digital information and cultural sector through a professional exchange program. While the initiative was originally planned for mid-October, the visit was postponed to January due to unexpected visa issues as a result of the closing of U.S. consulates in Russia.

The participants at the Google headquarters in NYC. (Photo: Valeriy Klamm) 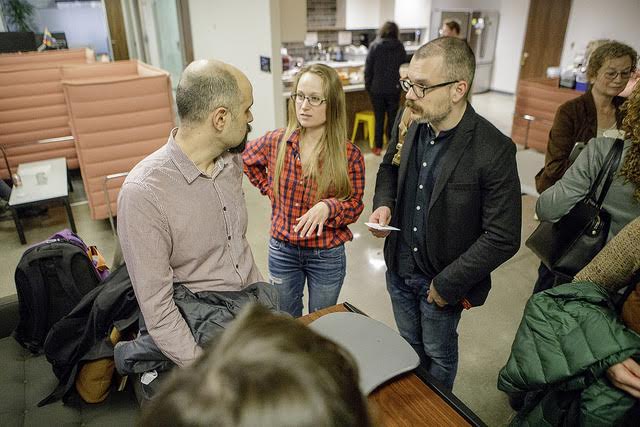 The participants represented a wide range of work in the realm of digital entrepreneurship. Their projects include investigative journalism focused on the Russian political economy (The Bell), community-based media that engages Russian speakers around the globe as writers and reporters (Mamihlapinatana), an online database of Russian personal diaries spanning the 18th–20th centuries (Prozhito), and a photo blog that documents life in rural Russia (Birthmarks on the Map).

During this week, the delegates and PEN America staff visited with representatives of the tech, media, and policy communities in both New York and San Francisco, spoke on panels in both cities, and met with tech journalists from the Bay Area.

Highlights of the New York visit included meetings with Slate, Twitter, and Kickstarter; in the Bay Area, the delegates engaged in dialogue with representatives from Bloomberg, Netflix, and Wikimedia.

Meeting at Netflix in the Bay Area. (Photo: Valeriy Klamm)

PEN America also organized several panels in which the delegates had the opportunity to share their perspectives with American audiences. In New York, participants spoke at the Council on Foreign Relations. In San Francisco, they spoke for the audience of the closed club The Battery, and later were hosted by the law firm Farella, Braun and Martel in a public event moderated by PEN America CEO Suzanne Nossel and attended by a number of PEN America’s friends from the Bay Area.

Collectively, our Russian guests spoke in front of well over 200 people, and also met for brunch with tech journalists from The New York Times, Buzzfeed, and NPR.

This project aimed to establish initial connections between Russian and American digital professionals, recognizing that real partnerships might take time to develop. However, even before the end of the week, a prominent New York City bookstore agreed to feature Rhinoceros (Носорог), a literary journal part of Egor Mostovshchikov’s Mamihlapinatana, increasing the visibility of an innovative Russian-language media company in the United States. Meanwhile, Meg Bowles, senior director of The Moth, provided coaching on the intricacies of podcasting to the production team at Arzamas, led by Irina Kaliteevskaya. The Electronic Frontier Foundation also shared a number of free resources that the participants can use to keep their projects safe online.

This project was something of a departure from previous PEN America delegations that were specifically focused on literary writers. This diverse set of participants made for a series of rewarding discussions that helped illuminate the creativity and dynamism present in modern Russia for the American interlocutors, provided significant new information and opportunities for participants, and exposed PEN America to a new range of organizations, especially in the tech world.

This was also one of PEN America’s first real forays into the Bay Area, and we believe it will provide a useful basis for further engagement in that community. Together with all the participants, Russian guests and American partners alike, PEN America also came up with new ideas on how to keep this professional exchange going for the sake of supporting innovative digital projects and promoting independent, unbiased information flow in and between Russia and the United States.