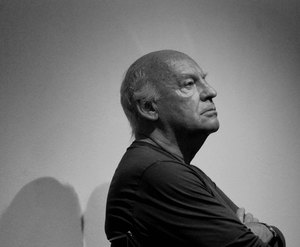 PEN American Center is deeply saddened by the passing of Uruguayan author Eduardo Galeano, who died on Monday at age 74. One of Latin America’s most iconic writers and famed for his journalism, novels, and political satire examining the idiosyncracies and injustices of history, he died of complications from lung cancer in his home in Montevideo, Uruguay.

“The world and Latin America have lost a maestro of the liberation of the people,” said Bolivian President Evo Morales. “His messages and works have always been oriented toward defending the sovereignty and dignity of our peoples.”

Born in Montevideo in 1940 to a civil servant father and a book-store owning mother, Eduardo German Maria Hughes Galeano began his career as a journalist at the age of 14, publishing cartoons at the Uruguayan paper El Sol under the name “Gius”.

Quickly moving up to the position of editor, he wrote his seminal work, The Open Veins of Latin America: Five Decades of a Pillage of a Continent (1971), while working as a journalist for the University of the Republic. A damning critique of colonialism and its effects, it was banned by right-wing military dictatorships. For several years he lived in exile in Spain, where he published the autobiographical Days and Nights of Love and War (1978), about his time under the military dictatorships of Argentina and Uruguay.

His return to Uruguay in the ’80s prompted a new direction in his work; fresh from the success of Open Veins, The Memory of Fire explored the history of the Americas through a series of anecdotes in three volumes. One of his most beloved and most well-regarded books is Soccer in Sun and Shadow, (1995) a paean to the game he loved.

Galeano’s work inspired several generations of Latin Americans with powerful, acerbic descriptions of the continent’s exploitation by capitalist and imperialist forces. The writer defined himself as someone who helped rescue “the kidnapped memory” of Latin America, a “despised and beloved land.” In 2009, Galeano found himself the center of an unexpected surge of interest when Hugo Chavez, president of Venezuela, presented U.S. President Barrack Obama with a copy of Open Veins; the book went on to appear on bestseller lists and sell over a million copies.

Galeano’s  legacy ensures he will remain a prominent and influential voice of Latin American literature, continuing after his death to inspire new generations of artists and writers.

Read the full obituaries in The New York Times and The Guardian.