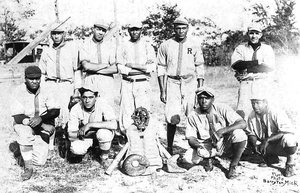 Nobody has accused Los Angeles Angels outfielder Torii Hunter, 2009 recipient of the Branch Rickey Award for community service, of talking trash.  But he became embroiled in a similar squabble on the eve of the 2010 season when he contended that: “People see dark faces out there, and the perception is that they’re African-American,  They’re not us. They’re impostors.”  Like Sheffield, he said that financial disparities between African American and Latino players were driving blacks out of baseball.  “As African-American players, we have a theory that baseball can go get an imitator and pass them off as us,” he said. “It’s like they had to get some kind of dark faces, so they go to the Dominican or Venezuela because you can get them cheaper.  It’s like, ‘Why should I get this kid from the South Side of Chicago and have Scott Boras represent him and pay him $5 million when you can get a Dominican guy for a bag of chips?’ …  I’m telling you, it’s sad.”

Sadder still, baseball throughout the Caribbean has been wracked by political passions and global recession.  In Venezuela, a few major league organizations have curtailed operations because they fear President Hugo Chavez’s militant populism and a deteriorating social climate in which players have been assaulted or kidnapped.  Winter leagues elsewhere in the region have struggled at the gate, with the Puerto Rican league suspending play for a season.  Nor have the region’s teams met expectations in the World Baseball Classic.  The Dominican Republic has yet to advance past the semi-finals.  In the 2009 Classic, the the Netherlands humbled the Dominican Republic, not once but twice.  The Netherlands!  Cuba reached the finals of the inaugural games but lost to Japan, who won again in 2009, this time vanquishing Korea.  These Asian victories, however, have not stanched the growing number of the Caribbean’s best players leaving their own leagues and heading for the United States.

More serious issues plague baseball in the islands than defeats in international competition.  The grassroots of the game have been scorched as major league organizations and ‘agents’ known as buscones corral players at younger and younger ages.  These kids are usually dirt poor, enthralled by the game, and incredibly vulnerable.  For every one of them who reaches the majors, hundreds fall by the wayside and have little to fall back upon.  The emergence of the buscones, who number over one thousand in the Dominican Republic, has altered patterns of player procurement and encouraged widespread and unscrupulous manipulation of youth by those seeking to profit from their athletic talents. As Dominican scandals splashed across the U.S. sporting pages for steroids and age violations, fans question Caribbean baseball’s ethical moorings.

At times, it seems as if everybody is trying to game the system, one that Major League Baseball has controlled and profited from since its belated and hesitant integration over sixty years ago.  Though MLB is currently attempting to bring order and transparency to the player procurement system, it has been complicit in that system’s worst abuses.  It ignored these problems as they festered and only adopted a reformer’s posture after its image and the lives of many young men were damaged.

The histories of African Americans and Latinos in baseball have been inextricably linked for over a century, first by their mutual exclusion from the major leagues, then by integration.  For major league baseball, no moment was more transformative than Jackie Robinson’s arrival in 1947.  African Americans and Latinos have since reshaped the game.  Together, they have provided the sport with its most iconic figures, won far more than their share of individual honors, and been at the core of almost every championship team since 1947, with the exception of the New York Yankees of the 1950s and 60s.  Integration also gave license to major league baseball to proclaim that it had overcome the six decade-long color line that had disfigured the ‘national pastime.’  Robinson’s triumph became proof of the United States’ capacity to resolve its historic racial contradictions.

But the symbolism of integrated and increasingly international play tells only part of the story.  Major League Baseball’s drive for profit and control—not its desire to rectify historic wrongs—led it to accept integration.  That same lust to maximize revenues and exert dominion over players and rivals has shaped its actions in regard to black America and the Caribbean ever since.

The history of African Americans and Latinos in baseball has traditionally been portrayed as a tale of their shameful segregation and redemptive integration.  Segregation was certainly shameful, especially for a sport so heavily invested in its own rhetoric of democracy and American exceptionalism.  But for African Americans and Latinos, integration was also painful.  Although long overdue and a catalyst to social change, integration cost black and Caribbean societies control over their own sporting lives.  It changed the meaning of sport and not usually for the better.  While channeling black and Latino athletes into Major League Baseball, integration did little for the communities they left behind.  On the contrary, it actively destroyed or weakened institutions in the black community and the Caribbean.

With the launching of the World Baseball Classic in 2006 and the appearance of an astonishing array of nationalities and races in the World Series, Major League Baseball seems to have become what it has long proclaimed it was: a global game played on a level playing field for men of all races and nations.  But it’s not as democratic and progressive as it claims to be.  Nor has it ever been.  Today more than ever, Major League Baseball sets the parameters for African Americans and Latinos in baseball.  The major leagues, not black America or the Caribbean, benefit the most from their participation.  By imposing its imperial will on black America and the Caribbean, Major League Baseball has achieved unprecedented prosperity, but gutted the game at the grassroots along the way.  Baseball has never been stronger as a business, never weaker as a game.  It didn’t have to be that way.