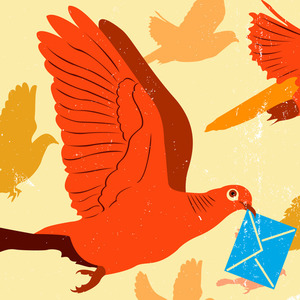 Tolu Ogunlesi is a Nigerian journalist, poet, blogger, and satirist based in Lagos. Between 2009 and 2011, he was features editor and editorial board member at NEXT newspapers, and is currently West Africa editor for The Africa Report magazine. He chats with Afridiaspora about his newest project, Pigeon Posts: Letters from Africa, Lagos, literature, and the art of writing.

KYEREMATEN: Pigeon Posts: Letters from Africa is an interesting project. A book, if you will, by four different writers in four different African countries, writing about their respective cities over ten weeks. What drew you to the project and why did you decide to get involved?

OGUNLESI: I was approached by Pigeonhole Publishing and it didn’t take long to decide that this was the kind of project that I’d like to get involved with. I thought it would be a great and exciting way to begin my year because it combines a couple of things that I’m quite passionate about:

1) The city of Lagos, where I’ve lived for about ten years now. This was an opportunity to tell the world about Lagos from the point of view of an insider, to be an interpreter of Lagos to the world. It’s a city that many people find puzzling and I look forward to writing about all different aspects of the city.

2) There is the digital nature of the project. Ten posts over a couple of weeks, in chapters or “staves,” where people can purchase chapters online. The elements of multimedia: audio, photos. It’s going to be a great digital experiment and we are all looking forward to how it’s going to work and we hope it’s a great success.

KYEREMATEN: In the first stave, titled “Lagos: An Exceptional City” you write about the upcoming elections, the traffic, a bit about how things run in the city—an introduction to Lagos. How are you going to shape the narrative of what to write about Lagos?

OGUNLESI: It’s been quite challenging deciding what to put in a stave and what to leave out because there is so much to write about Lagos. I can’t actually say I have an answer to the question. But in the actual writing, the topics take shape. I haven’t sketched out ten staves for ten weeks. I want it to have an element of real-time action to it, so it’s not just ten staves about Lagos. Each stave should have an element of life in Lagos at the time that the stave was written. I’ve taken the license to pull in as many things as I can to capture the essence of Lagos. Lagos is this chaotic city where everything is happening at once and I want my contributions to reflect that.

KYEREMATEN: One of the upcoming staves is titled “Literary Lagos.” Nigeria, as we all know, has a great literary history and has produced so many greats, from Chinua Achebe to Chimamanda to many more. Why did you decide to dedicate a stave to writers and writing in Lagos and what does it mean to you?

OGUNLESI: Lagos is a city that has defined and been defined to a large extent by literature. There is a book by a poet called Odia Ofeimun called “Lagos of the Poets”—it’s a substantial collection of poems written about Lagos. Because of the kind of fervor and energy it has, Lagos attracts quite a lot of attention from writers and poets, so it made sense to write about it.

KYEREMATEN: Who are some of the favorites now?

OGUNLESI: There are a lot of favorites that may not be known outside of Nigeria. There are, from the point of view of the publishing industry, two classes of Nigerian writers: the ones that have been published in the West, and the ones that have not. We also have quite a vibrant publishing industry here at home. There are all sorts of exciting authors working now: Eghosa Imasuen, Uche Umez, Emmanuel Iduma, Dami Ajayi, Abubakar Ibrahim, Ukamaka Olisakwe. They are all great talents and are fresh, and they are extending the boundaries of Nigerian fiction. In a couple of years, all these names will be global.

KYEREMATEN: What are some of the other topics you’ll be tackling in future staves?

OGUNLESI: I’m trying not to make each stave about only one thing. There are many aspects of Lagos that I want to touch upon. There is the informal economy in Lagos, I touch upon that a bit in the first stave, but that is going to come out again and again. At least 70 percent of the economy in Lagos is informal; there are vendors, hackers, street markets, and they are a huge part of the character of Lagos. Also, the traffic situation in Lagos, as well as the appalling power situation, where power cuts are a standard way of life here. There is lots of chaos, lots of dysfunction, but there are also improvements in governance. There is an order that is starting to emerge out of the chaos. For arts and culture, it is the most exciting time; people are launching art galleries, spoken word events, drama productions are happening. There are a lot of topics to pull from and write about.

KYEREMATEN: At the end of the ten weeks, what do you want people to understand about Lagos?

OGUNLESI: I want people to understand that Lagos is a complex and complicated city. Many a time, the narratives about Lagos portray it in one-dimensional terms. For instance, the world knows Lagos as that city where Ebola hit Nigeria first, or where people sit in traffic for half of the day. The idea is to provide a rounder, fuller picture of the city, to create a complex, multilayered, many-sided view of Lagos. A view that I hope will encourage people to dip their feet in and visit. There is nothing I would love more than for someone to say “I decided to visit Lagos after I read your piece, and I’ve decided to see it for myself.” Lagos is not a place where people come on holiday. I would love to have people come and see it for themselves after reading my pieces.

KYEREMATEN: Every writer walks a different journey to becoming a writer. What has your journey been like and have you always wanted to be a writer?

OGUNLESI: One way or another, I’ve always wanted to be a writer. My first novel was written when I was twelve years old and I was largely influenced by Enid Blyton’s work. There has always been that impulse to write, but it was always going to be a part of my life. I studied pharmacy in university and worked in management consulting and many other jobs before I decided to write full time. I would combine it with whatever job I was doing, but life was slowly pushing me towards writing full time. There wasn’t one moment when I suddenly decided I’m going to do it, it just happened. It was an evolution of sorts.

OGUNLESI: I certainly don’t get any giddy feelings from it. It’s just a lot of hard work. I often think there must be easier ways of earning a living. It is one creative endeavor you cannot outsource. You cannot outsource the thinking and the writing. You just have to sit down and do it. It’s a solitary occupation. There is nothing magical or spiritual about it, but there is a certain fulfillment, first when I see my ideas taking shape on paper. You start out with a jumble of ideas, words, and thoughts, impulses, and then you start seeing it take shape. That’s the first fulfillment. The second fulfillment comes when it is published, it’s out there. The baby is out; it no longer belongs to you, but to the whole world. At that point, you see the things that could have made it better or different, but you also see things that you didn’t see before but that your readers can see in the finished work.

KYEREMATEN: Is there anything else that you are working on that you’d like to talk about?

OGUNLESI: I’m working on a project called The Gidiopolis. “Gidi” is a local name—in Pidgin English—for Lagos. I’m not sure where it came from, but it’s what many young locals call it. Gidiopolis is a website about Lagos, Lagos-themed events, merchandizing. I’m launching the official website in February, but we have a Twitter handle now. It’s my Lagos project. The idea is to provide news and information about living and surviving in Lagos.

Pigeon Posts: Letters from Africa (2015) can be read here.