“There is so much longing and humanity coursing through this collection, and also artistry. The voices in it will stay with me.”
Emily Bazelon, staff writer for The New York Times Magazine and author of Charged: The New Movement to Transform American Prosecution and End Mass Incarceration

“I am so thankful for the writing and visual art in this anthology. The reverence and meditations on making a life under austere, punitive conditions are astounding. In verse and visuals, these writers and artists bring to fore the power of creativity for our very survival. Collectively, these works propel us all forward to imagine a society beyond bars.”
Nicole R. Fleetwood, author of Marking Time: Art in the Age of Mass Incarceration

(New York, NY) — PEN America today announced the release of its third annual PEN America Prison Writing Awards Anthology, this year entitled Breathe into the Ground. The collection of poetry, fiction, nonfiction, and drama from incarcerated writers in the United States includes not only their work but also personal letters from writers about their experience amid the COVID-19 pandemic, which has raged through the country’s jails and prisons. Orders are available here. 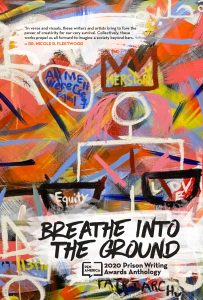 “As writers, we cultivate on life the page, and this year, that’s never been truer amid a pandemic that has ground our society to a halt and jeopardized the lives of millions of incarcerated people in the U.S.,” said Caits Meissner, director of PEN America’s prison and justice writing program. “In this anthology, writers on the inside commune with one another and with those on the outside, joined in their writerly craft and common humanity. We’re proud to make this collection available as widely as possible, both inside and outside the walls, and celebrate the fantastic work of our award winners.”

The PEN America Prison Writing Contest takes submissions from anyone incarcerated in a federal, state, or county prison in the year before the September 1 deadline. Prizes are awarded for poetry, fiction, drama, nonfiction, and memoir. In 2018, PEN America began publishing all awarded submissions in a single anthology, available both online and in paperback, in an effort to be included in prison and jail libraries nationwide where there is no internet access.

This year’s collection includes the winners and runners-up from this year’s competition, featuring works from P.M. Dunne, Nick Browning, Mark Alternhofen, Jason Centrone, Elizabeth Hawes, and many more. The collection also features a meditation on the inaugural PEN America/L’Engle-Rahman Award for Mentorship, given for the first time this year to mentor/mentee pairings from the PEN America Prison Writing Mentorship Program and named for the late acclaimed author Madeleine L’Engle and her 10-year written friendship with scholar, writer, and former Black Party leader Ahmad Rahman.

The anthology is punctuated by original visuals responding to the awarded writing  from incarcerated members of the Justice Arts Coalition, and concludes with a series of letters from the awarded writers behind bars, reflecting on the pandemic and its impact on the millions of people incarcerated in the country’s prisons and jails. The cover art was supplied by rising formerly incarcerated artist Halim A. Flowers. PEN America received more than 1,000 entries for this year’s contest, and 50 judges volunteered their time to read and score this year’s entries.

“This anthology is a testament to the human body and it’s resilience, even when caged. Much more than a collection of pains and grievances, Breathe into The Ground reaches from behind the highest fences toward something we might call freedom. As our institutions are being stress-tested, we would be wise to turn to these writers and find out how they’ve still managed to hand us diamonds when the pressure felt unbearable. Read this book and take survival notes, for they are on every page.”
Justin Rovillos Monson, PEN America Writing for Justice Fellow

“What I love most about this anthology is the range of voices inside of it. The work in this remarkable collection rejects the flat, two-dimensional renderings often imposed upon those incarcerated. No two works are the same. It is expansive, it is breathtaking, it is brilliant. This anthology is essential reading both as a collection of literature, and as a reminder that those who are incarcerated have so much to tell us. Now it is up to us to listen.”
Clint Smith, author of How the Word Is Passed: A Journey Across the Country that Black America Built

Check out @AtRiskArtists new, limited-run podcast on artistic freedom in Asia, expanding on the findings and recommendations from the publication "Arresting Art: Repression, Censorship, and Artistic Freedom in Asia." https://bit.ly/3ljGwWO

Join PEN America this #BannedBooksWeek as we draw attention to the divisive book bans and censorious threats that have taken hold in schools, academia, and the public square. Learn more here: https://bit.ly/3llXGDf.

What if social media platforms offered instant extra protection & support to users bombarded by cyber mobs? Together w/@PENAmerica & the Coalition Against Online Violence, we're calling on @Twitter to #FightOnlineAbuseNow by building an SOS feature: https://bit.ly/3zJxCaU